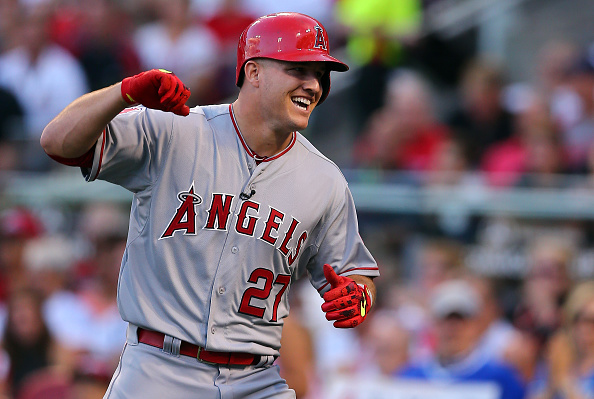 By almost all accounts, Los Angeles Angels outfielder Mike Trout is the best player in Major League Baseball. He’s not even 27 and he already has two MVP awards and seven All-Star nods. When you compare his numbers to the all-time greats, it’s not hyperbole to put him in the same category as guys like Mickey Mantle, Willie Mays, and Barry Bonds. He’s on a clear path to the Hall of Fame and immortality.

So why isn’t he more popular? Despite being a once-in-a-generation talent, Trout routinely scores low when average Americans are asked to identify him. So what’s the problem?

According to MLB commissioner Rob Manfred, the problem is Trout himself. Via USA Today:

Our own Matt Yoder broke down the insipidness of that response, blaming Trout when MLB seems unable to do what the NBA and NFL are so good at doing in hyping up their own talent.

If MLB had the kind of operation that could turn their athletes into household names, then why haven’t they done it with other stars? What about Bryce Harper or Clayton Kershaw or Kris Bryant or Mookie Betts? What about Giancarlo Stanton or Aaron Judge or Joey Votto? Votto is one of the best players in his era and EVEN PEOPLE WHO WORK FOR TEAMS IN HIS OWN DIVISION DON’T RECOGNIZE HIM.

MLB has a once-in-a-lifetime athlete in Mike Trout. If the league can’t find a way to make him more marketable, then it is nothing but a damning condemnation for MLB’s freefall in the larger American sporting ecosystem.

Wednesday, the Angels fired a warning shot back in Manfred’s direction. While not explicitly naming the head honcho, they defended their star player and touted all of the great things he does off the field to be a true ambassador that the league should be proud of.

Today, the #Angels released the following statement on OF Mike Trout: pic.twitter.com/xFLURtZ4bT

It’s not Mike Trout’s responsibility to trade in his priorities and good efforts for trite sponsorship deals. It’s Major League Baseball’s job to turn Mike Trout into a household name by promoting the hell out of him, his baseball prowess, and his good deeds off the field.