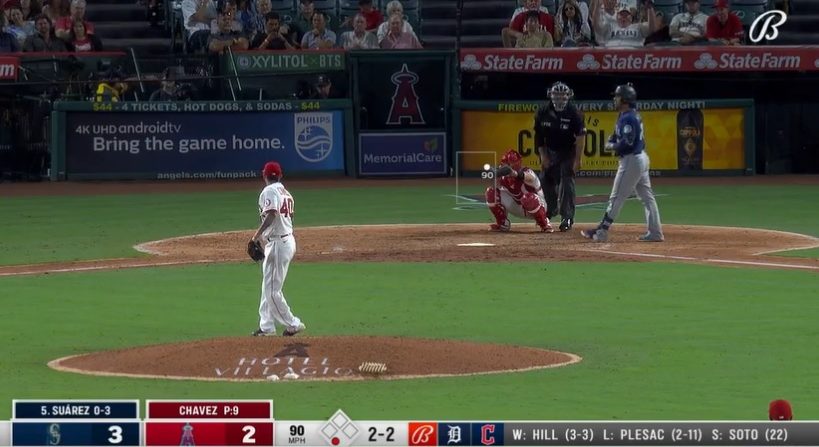 On Monday, Seattle’s Carlos Santana walked on three balls, thanks to a mistake made by home plate umpire Laz Díaz. But while Díaz made an egregious mistake, the Angels share some blame. Nobody asked for a review of the count, protested the game or even seemed to notice. Tuesday’s mistake was noticed and was almost as bad. Unfortunately for the Angels, balls and strikes aren’t reviewable.

With one out in the ninth inning, Angels pitcher Jesse Chavez was facing Eugenio Suárez. Chavez’s 2-2 pitch was a seemingly obvious strike, only home plate umpire Brian O’Nora didn’t agree.

To be fair it wasn't right down the middle@Angels | #GoHalos pic.twitter.com/aIl29auncN

Suárez ended up walking. Had that pitch been called correctly, the J.P. Crawford’s flyout would have ended the inning and given the Angels a puncher’s chance, down only 3-2 heading into the bottom of the ninth. As it was, happened, Crawford’s flyout was only the second out. After Curt Casali singled, Adam Frazier drove in two with a triple and scored on an RBI single from Sam Haggerty. Then, to top it all off, Julio Rodríguez hit a two-run homer.

The home run made it 8-2, which stood as the final.

MLB umpires have been under fire all season, even in situations where missed calls ended up being inconsequential.

This call was not inconsequential and fans were not happy.

We’re all pretty sure the inning would have looked very different if this had actually been called strike 3 right? https://t.co/tPJpB1N6Ti

Chavez also weighed in on the matter after the game.

The Mariners went on to score 5 runs. pic.twitter.com/WF4GGdQCJS

If there are any Mariners fans out there feeling defensive about their team’s win, relax. We’re not litigating the win. Chavez still had a chance to retire Suárez and even after the walk, could have gotten out of the inning. Also, the Angels went down in order in the ninth inning. Their three hitters were a collective 0-for-8 on the night. So, even if everything had gone swimmingly for the Halos in the top of the inning, there’s no reason to think that the bottom would have been any different.

But while Seattle’s win isn’t being put on trial, O’Nora’s mistake can’t be ignored. Chavez’s pitch was not on a corner. It also didn’t have a lot of break into or out of the strike zone. It was a strike from the moment it left Chavez’s hand. For O’Nora, this pitch was a gimmie. He couldn’t handle it. That’s bad and it’s only going to make the calls for automated strike zones even louder.

Players, managers, and coaches are getting tired of these happening so frequently. They’re not alone. The fans are just as sick of it. If and when it happens in a playoff game, the frustration will only be louder.