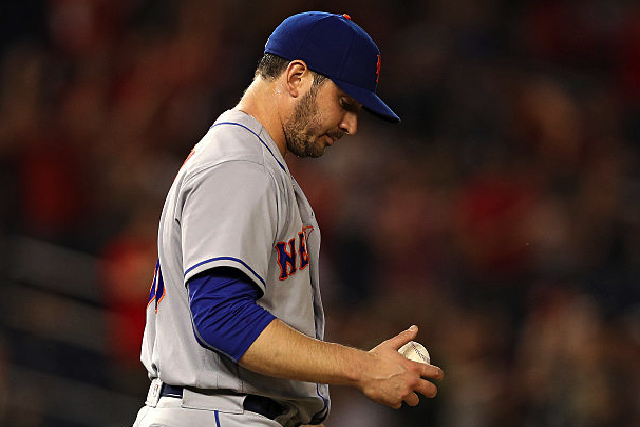 As Matt Harvey left the mound Tuesday night, following the latest disappointing start in a season that’s been full of them, it’s likely that a great many New York Mets fans were reminiscing about happier, simpler, more innocent times.

Say, just a few seasons ago, when the only Matt Harvey worry was whether he was going to end up in pinstripes.

Yes, it may seem almost quaint in retrospect, but when Matt Harvey burst onto the scene as the “next Roger Clemens” back in 2012, and followed it up with an All-Star appearance in 2013, many of the always paranoid Flushing Faithful started looking ahead to 2018… when Harvey would hit free agency, and his rocket arm, killer command, and piercing brown eyes would clearly be headed elsewhere. After all, the Mets aren’t destined to have nice things. Not for long anyways.

Jump ahead to the present day, and the fans who fill Citi Field would be thrilled at this point just to have Harvey regain his form during these arbitration years. The numbers, thus far in 2016, tell a grim tale. Harvey has allowed 36 earned runs in 53.1 innings, for an ERA of 6.08, more than double his career mark. The strikeouts are down, the walks are up, and while some advanced stats (like his 3.62 Fielding Independent Pitching mark on FanGraphs) tell a slightly less depressing story, there is no denying that Harvey is slogging through the toughest stretch of his career. The only question is why.

Matt Harvey bolted the stadium immediately after the game tonight. Didn't stick around. He won't be discussing his start. #Mets

Harvey, quite literally, provided no answers whatsoever on Tuesday, declining to answer questions from the media after giving up five runs and eight hits (three of them home runs) in five innings. It’s the sort of decision that’s sure to earn him plenty of ire in the back pages of the New York tabloids. (Free headline suggestion: “Use the Matt Signal: Dark Knight Goes Into Hiding!”) But the reality is that at this point, all but the coldest fans must have some sympathy for Harvey’s plight.

Just a few seasons ago, he was the talk of the baseball world. Since then, he’s been through Tommy John surgery, heavy scrutiny regarding end-of-season innings limits, and being supplanted by Noah Syndergaard as everyone’s favorite flamethrower with a superhero nickname.

But the most frustrating part — for the fans, and one presumes, for Harvey himself — is the inability to pinpoint exactly what has gone wrong. Plenty have pointed, understandably, to the 216 innings thrown by Harvey in 2015, the most ever by a pitcher in their first season back from a UCL reconstruction. And yet, there does not appear to be any specific injury to point to. If there was, Harvey, and the Mets organization, would almost certainly have used it for cover by this point.

Instead, talk of “flawed mechanics,” “general fatigue,” and the always dreaded “mental block” have been trotted out as explanations. But whether or not anyone can precisely isolate the cause of this slump, it’s become quite clear that the status quo is unsustainable.

“I’m not going there just yet,” said Collins, when questioned about whether Harvey will, in the short term, retain his regular spot in the rotation, “I’m going to, like I said, talk to Dan (Warthen) tomorrow, bring in Sandy (Alderson), and we’ll talk about some options.”

Nowhere in that quote, you might notice, was a guarantee that Harvey will make his next scheduled start. Among the options that have been bandied about are a trip to the bullpen, a trip to the disabled list, or (good heavens!) even a trip to the minor leagues. (Perhaps it’s not too late to submit the “Binghamton Dark Knights” as a rebranding option for the Mets’ Double-A affiliate.)

Whatever solution the team and Harvey decide to pursue remains to be seen. But no matter the course of action, there is one remarkable reality that has gotten a bit lost in the whole Harvey affair. The Mets can afford to be without him.

This too, would have been impossible to imagine back in 2012 and 2013, when “Harvey Day” was the rare beacon of joy during otherwise miserable seasons. Harvey was the light at the end of the tunnel, the ferocious young up-and-comer who would be there when the team got their Orange and Blue ship righted. Now, fresh off a spot in the World Series, the Mets are contenders again, and Harvey is the one who looks rudderless.

Nonetheless, general manager Sandy Alderson’s rebuild was always predicated on pitching depth and sure enough, Syndergaard, Jacob deGrom, Steven Matz, and ageless two-way slugger Bartolo Colon have all done their part. Add in the impressive starts from outfielder and one-man Pimp My Ride revivalist Yoenis Cespedes, Michael Conforto, and the newly acquired Neil Walker, and the squad appears to be good enough to afford Harvey time to find himself.

But the reigning National League champs will only hit their true peak if and when the 27-year-old Connecticut native is able to rediscover his form. Ironically enough, manager Terry Collins found himself looking to Tuesday’s opposition as reason for optimism.

“This guy’s too good. He’s just way too good to continue like this,” said Collins, before referencing Washington Nationals ace Stephen Strasburg, “But you know, I was watching the pregame show… the guy tonight that we faced was in a similar spot last year. So we do know it happens.”

Indeed, plenty of parallels have been drawn (including by Harvey’s own agent, Scott Boras) between Harvey’s season so far and Strasburg’s panic-inducing opening to the 2015 season. After throwing 200-plus innings in 2014, Strasburg was 5-5 with a 5.16 ERA in his first 13 starts of 2015. That was soon followed by a stint on the DL, thanks to discomfort in his neck and side. Since that time away, Strasburg has returned to dominance for the NL East-leading Nats and currently sits at 8-0 with a 2.79 ERA.

In a nutshell, that is where the never-a-dull-moment Mets find themselves a quarter of the way through the 2016 season: Looking to their division rivals for some sort of silver lining. It’s a reminder that in sports, to quote the great philosopher Roddy Piper, “Just when they think they got the answers, I change the questions.”

Matt Harvey was the ace, the icon, the sure thing that the Mets never thought they’d have. After a whole lot of angst about losing him to the future, suddenly the team and its fans are just praying he’ll rediscover his past.