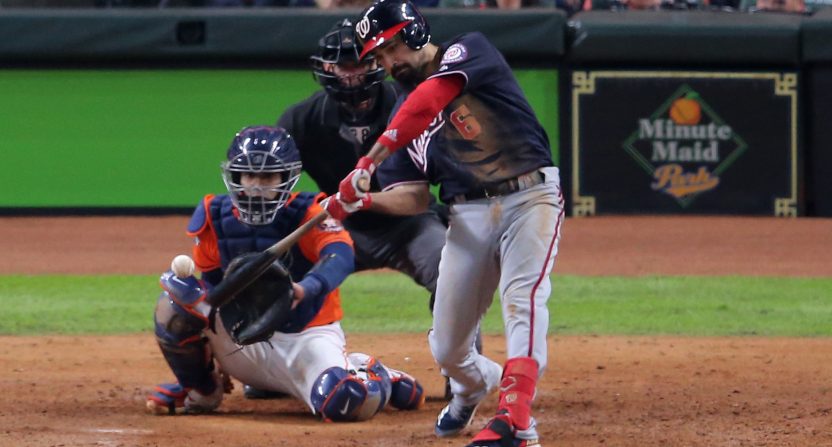 So Anthony Rendon gets full no trade clause. No opt outs

That contract matches the deal signed pitcher Stephen Strasburg with the Washington Nationals on Monday, and the Nationals are of course Rendon’s former team. Rendon makes $35 million annually over the contract, which is lower than only his new teammate, Mike Trout.

Rendon, 29, has been one of the most underrated players in baseball for several years. You may hear more about third basemen like Kris Bryant, Nolan Arenado, and Manny Machado (all stars themselves and well worthy of the recognition, of course), but no third baseman has been more consistently productive over the last few seasons than Rendon.

And now the world’s best baseball player has a true superstar to join him in the lineup, for an Angels team that has consistently been a disappointment in the Trout era (certainly not Trout’s fault, as he spots them about 10 wins annually). That’s to go with Shohei Ohtani and elite prospect Jo Adell. So, the Angels are finally building something real around Trout, and they will likely turn their focus to attacking the pitching market in the coming weeks/months.

What a freaking pivot from the Angels. Wow. Now, they still have avenues to acquire pitching and have a core that includes:

Oh, and it’s been a hell of a few days for super agent Scott Boras (whose client Gerrit Cole signed a record-breaking pitching contract on Tuesday).

Monday: Stephen Strasburg gets $245 million from the Nationals.

Tuesday: Gerrit Cole gets $324 million from the Yankees.

Wednesday: Anthony Rendon gets $245 million from the Angels.

Over three days, Scott Boras negotiated $814 million worth of deals.