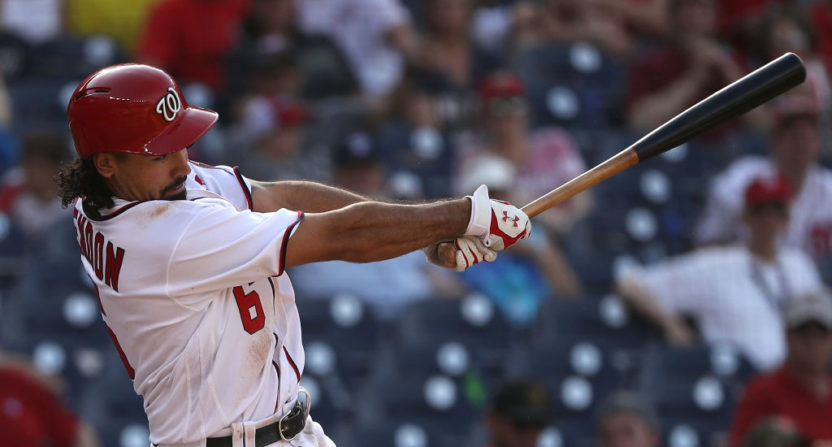 Whether you’ve noticed or not, Rendon has been one of the best players in the National League in 2017. Entering Wednesday’s action, he ranked seventh in the NL in batting average, fourth in on-base percentage, fifth in slugging percentage, fourth in OPS and OPS+ and third in wRC+. He also stands first or second among NL third basemen in most defensive metrics.

If you follow the Nationals on Twitter, you know that Rendon leads all NL position players in Fangraphs’ version of WAR, placing behind only Aaron Judge among all Major Leaguers. He also tops NL position players in Baseball-Reference’s WAR and Baseball Prospectus’ WARP. These value stats are not the end-all be-all in player evaluation, but they’re also not conjured up at random. FanGraphs, Baseball-Reference and Baseball Prospectus proclaim Rendon the NL’s best player this year because he has been one of the league’s top hitters while also playing Gold Glove-caliber defense at a premium position.

And yet, Rendon was not an All-Star. He placed only fourth among NL third baseman in the fan vote, then was passed over by the players and the commissioner’s office. He got one more shot as one of five nominees for the final roster spot but lost a fan vote once again. Yes, third base in the NL is an absolutely loaded position, but that’s no reason for arguably the league’s best player this year to be left out of All-Star weekend.

In a way, Rendon’s snub was no surprise. Despite a track record that includes a fifth-place MVP finish in 2014 and a 4.7-win season (per FanGraphs) in 2016, Rendon lacks the name recognition of Kris Bryant, Nolan Arenado or Manny Machado and the eccentricity of Josh Donaldson or Justin Turner. He has no ubiquitous endorsement deals. The average fan has little reason, aside from his understated excellence on the field, to take note of him. Hell, his own manager seems to forget how good he is, persistently batting him sixth not matter how many homers he hits.

There are reasons for Rendon’s low profile, of course. He’s famously media-shy, submitting to interviews only under duress and resorting to sarcasm when forced to stand in front of a camera. He also shares a clubhouse with superstars Harper, Daniel Murphy, Trea Turner, Max Scherzer and Stephen Strasburg, who hog much of the limelight, and this year he has had to contend with Zimmerman’s comeback narrative as well. Media and fans following the Nationals have plenty of things to talk about beside Rendon, and the microphone-shy third baseman is perfectly content to let them focus elsewhere.

But make no mistake: Rendon, at age 27, is as good a player as almost anyone in the world. Since the start of 2014, he has been the 14th best Major League position player, per FanGraphs, even though his 2015 season was largely lost to injuries. Since Opening Day 2016, Rendon has been the seventh best player in baseball. The six guys ahead of him on that list have been to 10 All-Star games over the past two seasons, while Rendon has been to none.