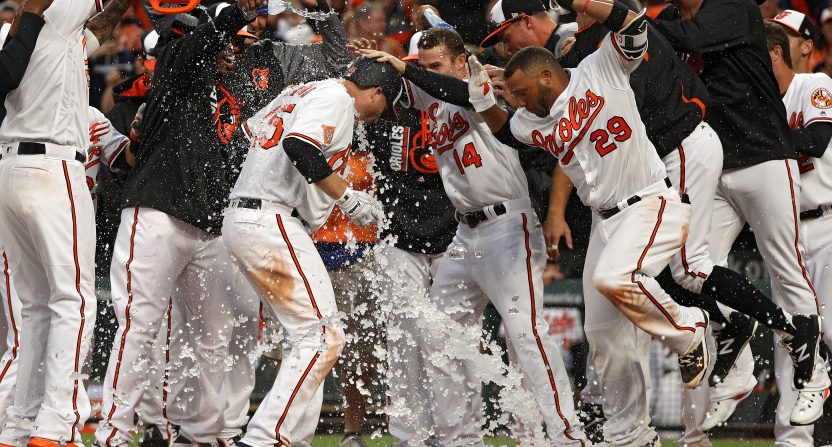 Regular-season baseball is finally here, and after a winter of speculation, we finally have real results to analyze.

The problem is, MLB’s season is 162 games long, and it can take quite a while for any records or statistics to seem meaningful.

We asked our staff that very question:

Alex Putterman: During the first week (or even month) of the baseball season, you might as well keep Baseball-Reference closed. A few games of statistics are not going to teach us anything.

But if you have a sharp eye, there are certainly insights to be gained from our first glimpse of real, competitive baseball. If a pitcher was working on a slider in Spring Training, is he actually throwing it in a game that matters? If there was a closer competition in camp, who is the manager trusting with the first save chances? Is the lineup different against righties and lefties? Is the team shifting more than last season?

In April, we shouldn’t focus too much on results, but it’s worth keeping an eye on the process.

Matt Clapp: The first week of the MLB season teaches us very, very little. That’s especially the case with position players. How did things go for Tuffy Rhodes and Chris Shelton after their blazing starts? Crazy things—good and bad—happen in small sample sizes, and the league usually adjusts to young/out-of-nowhere hitters. And slumps happen, for every hitter. Some hitters are also just notorious slow starters.

But I do think the first week can tell us something in terms of pitchers, and that’s usually just confirmation that a pitcher is healthy, or that a good pitcher is indeed still good.

Example: Clayton Kershaw struggles badly in Spring Training, particularly with his velocity, and there is naturally panic wondering if he’s hurt or all of a sudden bad. Then he goes out on Opening Day and looks like the usual Clayton Kershaw.

On the other side of a coin, a pitcher’s velocity is notably down in the spring, and stays down when the season arrives. Sometimes that’s a natural early-season thing, but it’s also a cause for concern.

So, I think we can learn some things from pitchers but not much. And there certainly shouldn’t be *conclusions* drawn from a week’s worth of games.

For example, Jeff Bannister isn’t a new manager. This is his third season at the helm of the Texas Rangers. But by publicly backing Sam Dyson and not taking him out of the closer’s role after a pair of horrendous outings against the Indians, Bannister is putting his players at ease and thinking about the bigger picture. If he overreacted and pulled Dyson from the closer’s role, some of his players may have been more on edge in the early going of the season. Have a couple of bad games? You’re getting benched. Now, they know that Bannister is willing to work with them and stick with his starters despite rough patches.

And then, there’s the possibility that managers can adapt and evolve. Brian Snitker of the Braves is a good example of that. His bullpen management on Monday was shambolic, going through four pitchers in the seventh inning against the Mets (three of whom pitched pretty poorly). On Wednesday, Snitker’s bullpen usage was more optimal, including using closer Jim Johnson for *two* innings (and bringing him in before the Braves took the lead! BUT WHAT ABOUT THE SAVE?!?!). Was one of these games an aberration? That’s still unclear, but at least he’s not doing the same stuff every time out.

Liam McGuire: It’s tough. A week is a small sample size but generally, you can tell which teams are complete trash and which are not. Not that you can tell which teams are going to break out, but seeing a team like the Padres use Trevor Cahill, Jhoulys Chacin and a bunch of other discarded former back-of-the-rotation starters is a good enough glimpse to determine that yeah, they’re bad.

Plus, the opening week can tell us potential positional problems for teams going forward. Seeing Justin Smoak start at first base hurts my Blue Jays-fan soul, and I know he won’t be able to sufficiently produce at the position for an entire season. In a week you can identify weaknesses and hope your team addresses them sooner than later.

Ian Casselberry:  Most of us are prone to overreact to closers’ performance early in the season. It’s difficult to shake the impression of a blown save on opening day. But Mark Melancon’s blowing a win for the Giants in their opener highlights the question of whether or not he was a closer worth spending those kinds of free agent dollars (four years, $62 million) on.

Melancon was trending poorly last September, giving up 13 hits and five runs in 16 innings. If a team is going to spend money on a free agent closer, which doesn’t typically seem like a good idea, get an Aroldis Chapman or Kenley Jansen.

Ryan Williamson: Sometimes the early-season results pan out and sometimes they don’t. Let’s look at the team I follow (the Minnesota Twins). In both 2015 and 2016, the first week or so was rough. Two seasons, the Twins started 1-6, and ended up nearly making the playoffs as a wild card. Then in 2016, Minnesota got off to an 0-9 start and had the worst season in franchise history. There are other examples that would illustrate this some point, but the general point here is: Take what you see with a grain of salt. It could continue, but there’s a chance it might not.

Brandon Liebhaber: Frankly, the only thing that the first week of the season tells us is that baseball is back and the weather is (hopefully) getting warmer. In a sport with 162 regular season games, the first few are much too small a sample size to draw any conclusions from. Tons of players have a great April and are never heard from again (Remember when Chris Shelton hit nine homers in 13 games for the Tigers in 2006?).

One week or one month is not nearly enough for us to draw meaningful conclusions from in baseball. If you’re going to have a great month, October is a better choice than April.