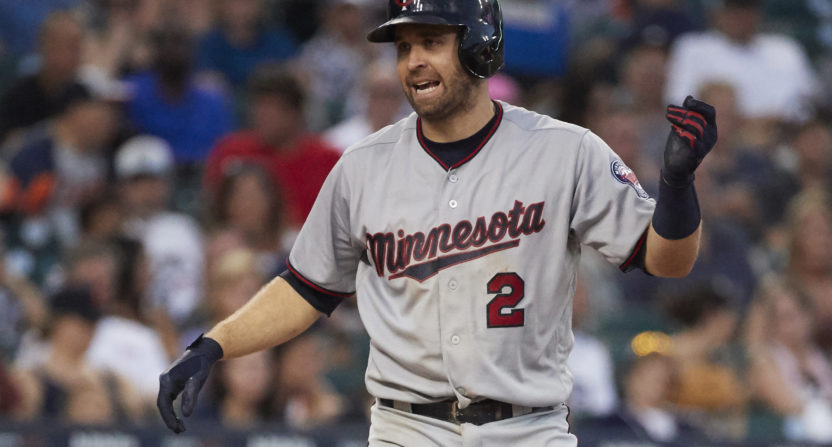 The longer you watch baseball, the most you learn about the game’s complex set of unwritten rules. Throwing at heads is rightfully not allowed. Neither is distracting fielders looking to make a play. Or walking across the pitcher’s mound on the way back to the dugout. Bunting to break up a no-hitter in a no-hitter? Definitely not okay.

And on Sunday we learned a new one: According to Brian Dozier and the Minnesota Twins’ clubhouse, it’s not cool to bunt when a pitcher is throwing a one-hitter.

The bunt-heard-round-the-Twins-clubhouse came in the ninth inning of Minnesota’s game against the Orioles. Batting with one out and no one on and his team down 7-0, Baltimore rookie catcher Chance Sisco laid the ball down the third-base line, away from the Twins’ shift for an easy single. It was the Orioles’ second hit of the day off starter Jose Berrios.

Chance Sisco doesn’t mind if you put the shift on him. The #Orioles‘ No. 3 prospect had no trouble laying down this bunt for an easy single ?@Orioles Top 30 list: https://t.co/oB8UYJ6DbL pic.twitter.com/NHKryIQV2m

Following the bunt, Berrios walked a batter and ceded a single, then retired the game’s final two batters to seal the win. No harm, no foul.

Unless, that is, you ask the Twins.

As relayed by the team’s beat writers, the Minnesota clubhouse was furious at the bunt. Berrios called it “not good for baseball,” outfielder Eddie Rosario said “no one liked that” and Dozier made clear that he expected the Orioles’ veterans to put Sisco in his place. Manager Paul Molitor reportedly complained that the bunt “It kind of took some of the drama out of what might have unfolded,” as if that was something Sisco should have been concerned with.

Twins were not thrilled with Chance Sisco bunting for a hit in 9th with Berrios working on a one-hitter with a 6-run lead.

Dozier: “Obviously, we’re not a fan of it. He’s a young kid. I could’ve said something at 2nd base but they have tremendous veteran leadership over there."

Jose Berrios on Chance Sisco's bunt in the ninth: “I don’t care if he’s bunting. I just know it’s not good for baseball in that situation. That’s it.”

Eddie Rosario on the Sisco bunt hit against the shift in the 9th: "Nobody liked that. No, no, no. That’s not a good play." #mntwins

Here was how Sisco explained the bunt, via the Baltimore Sun:

“Just trying to mess with the timing of the game,” Sisco said. “He was kind of going through the lineup. Just trying to do what I can to get on base.

As Sisco explained, there are several reasons it made sense to bunt there. Among them:

Only in baseball, it seems, can a player be criticized for doing something to increase his team’s odds of victory in the service of some meaningless milestone… for the opponent. Players really think that the Orioles catcher should pass on an easy base-hit because it will make the Twins’ pitcher more happy. It’s entirely illogical. Or maybe, as Dozier and company might say, you just can’t understand without having played the game ?.