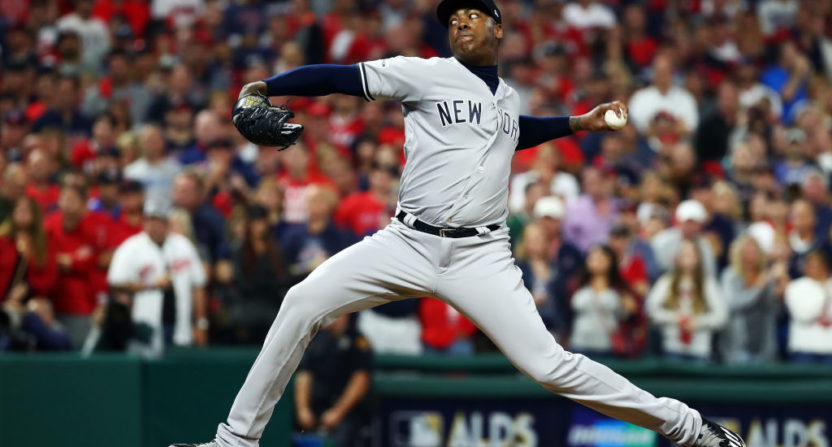 The New York Yankees lost 9-8 in extra innings to the Cleveland Indians in Game 2 of the ALDS on Friday, after taking an 8-3 lead into the bottom of the sixth inning. It was a brutal loss that now has New York down 2-0 in a best-of-five series to a more talented team, and much of the blame for the loss is being directed at Yankees manager Joe Girardi.

It appears that even Yankees closer Aroldis Chapman isn’t a fan of the manager. Sports Illustrated shared a screencap of Chapman “liking” an Instagram comment that said, “Let’s hope Joe’s contract is not renewed after the season. He’s a complete imbecile.”

Girardi has been heavily criticized for how he handled the sixth inning of Game 2. With a five-run lead, Girardi pulled starting pitcher CC Sabathia after the veteran left-hander walked one batter in the inning and had only thrown 77 pitches in the game. But what really bothered Yankees fans was Girardi not challenging a hit-by-pitch that would’ve resulted in the at-bat being ruled a foul tip and strike three after review.

Lonnie Chisenhall foul tip that should have been called strike three. No challenge by Girardi, horrible call pic.twitter.com/H6025WqtVo

Had that been overturned from a hit-by-pitch to a strikeout, the inning would’ve been over. Instead, the Indians had the bases loaded with two outs, and Francisco Lindor cranked a grand slam to make it a one-run game:

Girardi did not challenge because he didn't want to take his pitcher out of his rhythm. LOL…. GET RID OF THIS GUY!!! pic.twitter.com/AxR8ANmICY

Now, we don’t know if this all has to do with why Chapman seemingly isn’t a fan of the Yankees’ skipper. Maybe it has to do with Chapman’s usage (he threw two scoreless innings late in Game 2, for what it’s worth) or something else we’re not aware of. Just 10 months ago, the former Cubs closer said that Chicago manager Joe Maddon “abused” him with heavy usage in the 2016 postseason:

“I think he was wrong in the way he used me,” Chapman said. “He abused me a bit on how much he made me pitch, and sometimes he made me pitch when I didn’t need to pitch.”

It’s also possible Chapman was hacked, which is surely what he’ll say if asked about this Instagram story!

Whatever the case, it’s unlikely too many Yankees fans are going to take Girardi’s side at the moment. Of course, this Game 2 disaster could be largely forgotten if the Yankees could win three straight games over the World Series favorites. Five Thirty Eight currently gives that a 9% chance of happening.