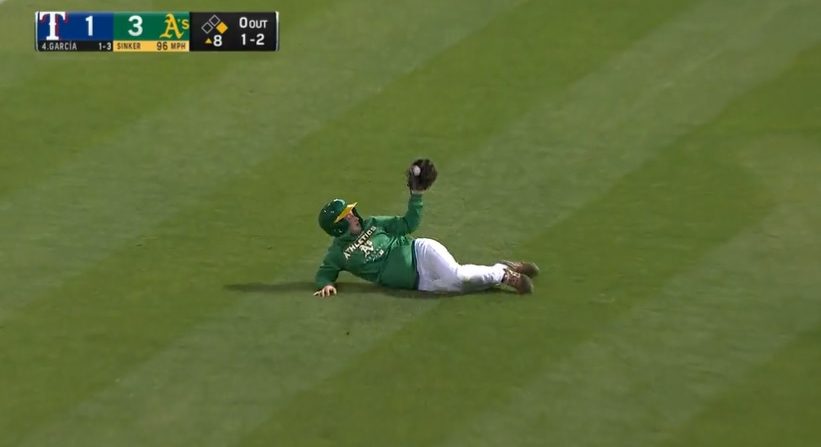 The Oakland Athletics defeated the Texas Rangers on Saturday night, moving their winning streak to three. But the most impressive play of the night wasn’t made by one of the A’s or even a Rangers player in defeat. No, the play of the day honors go to the ball boy who was in the Texas bullpen.

Adolis García came to the plate for the Rangers in the top of the eighth inning. He made good contact off of a pitch from Sam Moll but the ball went foul. The line drive went towards the Texas bullpen, where Jonathan Hernández was warming up. The ball likely would not have hit Hernández or the bullpen catcher but the A’s ball boy never let us find out. He left his feet to not only stop the ball from getting into the bullpen — but caught it in spectacular fashion.

.@SportsCenter, add it to your Top 10. pic.twitter.com/4uJizUJQD7

The MLB world reached out to show its collective appreciation of the stellar play.

Give the kid a Gold Glove. pic.twitter.com/AdqrFc9nQh

Outstanding defensive play from the As ballboy pic.twitter.com/2EqWLcBe04

The Giants could use the A’s ballboy as a late-inning defensive replacement. Probably should tbh pic.twitter.com/GITzPHnBg6

Most underrated part of this play is when the ballboy opened the glove to show he’d caught it. Big-league! https://t.co/pFjXYFLdMe

Indeed, as great as the catch was, the fact that the ball boy had the presence of mind to hold the glove up, showing that it was caught might have been even better.

As far as a team signing him goes, let’s say that there have been worse ideas. How much worse with the glove would this kid be than some Major Leaguers?