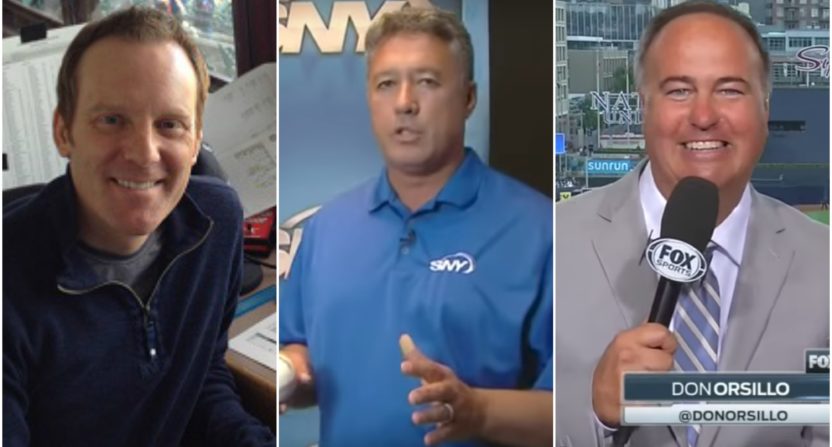 Last fall, baseball said goodbye to perhaps the greatest broadcaster the sport has ever seen, Dodgers play-by-play voice Vin Scully. But with Scully retired, the title of baseball’s best announcer is wide open. So we asked our staff a simple question: Who is your favorite baseball broadcaster?

For a slightly more scientific look at baseball’s best announcers, you can check out the Awful Announcing’s crowd-sourced ranking of Major League Baseball’s broadcast booths. But while you’re here, these are our personal choices.

Who is your favorite baseball broadcaster?

Ryan Williamson: As a kid growing up in the early 2000s, I’d have to say Jon Miller. Though I had the luxury of watching the Minnesota Twins on an everyday basis, there was something special about when you turned on ESPN on a Sunday night. Though I was never a Joe Morgan fan, I loved the balance Miller struck between intense and light-hearted. It definitely helped me fall in love with a sport. It’s just a shame we don’t hear him much on the national stage anymore, now that he calls games for the Giants.

Matt Clapp: So I hate being that person, but I’m going with two announcers because I can’t make my mind up. These two announcers have their own excellent traits anyway.

I’m probably biased as a Cubs fan, but I’d love Len Kasper regardless. He’s very reasonable (on Twitter too), intelligent, and frequently incorporates advanced stats into the broadcast. He’ll reference articles or factoids he came across on sites like FanGraphs, Baseball Reference, Baseball Prospectus, etc. He also has a very calming voice, a great sense of humor, and doesn’t come across like a homer.

Speaking of people with a great sense of humor, there’s Don Orsillo. I always loved listening to Orsillo on NESN with the Red Sox, but I had no idea just how fun he is until he joined Mark Grant in the Fox Sports San Diego booth last season. They’re a riot together, with Orsillo having a 30-second laughing attack that leaves him in tears just about every game. It seriously makes the Padres watchable. Heck, Padres broadcasts are even more entertaining in blowouts. And putting aside the shenanigans, Orsillo is one of baseball’s best game-callers, with one of my favorite broadcasting voices in all of sports.

Joe Lucia:  With Vin Scully out of the picture, I’ve been watching a lot more of Don Orsillo’s work with the Padres, and it’s been a blast. He’s a guy that can transition from serious to funny in an instant, and that’s a rare trait for an announcer in today’s game.

Ben Koo:  I’m rather fond of Dan Shulman. Despite ESPN having only one playoff game, his voice to me has a big-game feel to it. I don’t think there’s any sport where the-play-by-play announcer is as important as it is to baseball, where slow games and blowouts are probably more common than the other Big-Three American sports.

I’m well aware there are other announcers who have better knowledge of the game or just can tell amazing stories to pass the time, but Schulman has the best voice and the best tonation amongst his peers, and that makes all the difference to me as a casual fan who is probably on the fence on if I should be watching a game between two random teams or doing something more productive.

Ian Casselberry: I really like Ron Darling’s work. Maybe we favor play-by-play guys because they do most of the talking and set the tone for a broadcast, and because it’s really difficult to overcome an annoying or poor one. But Darling benefits from a strong play-by-play man setting him up in Gary Cohen, and he’s taken the opportunity to develop into a broadcaster capable of providing insightful analysis, being entertaining at slow points in the action, and also calling a game if needed.

Darling has also been impressive with his versatility. He does regional broadcasts with the Mets, transitions to the national booth with Turner during the postseason and in the offseason, he’s doing national studio analysis for MLB Network. He’s not going to yuk it up or be a bombastic personality, but Darling provides substance to any broadcast he participates in.

Alex Putterman: There’s no one I enjoy listening to more than Cubs play-by-play man Len Kasper, who brings thought and reason to every broadcast. Kasper treats viewers as smart fans, capable of nuance, not mindless homers grasping for simple explanations to every question. Yes, Kasper is open-minded toward advanced stats in a way most of his peers aren’t, but he’s also just exceedingly calm and rational. He knows he doesn’t have all the answers. He also knows baseball isn’t worth getting angry about. And it doesn’t hurt that his partner, Jim Deshaies, is one of the best in the business as well.

8 thoughts on “We asked our staff for their favorite baseball broadcasters. Here are their answers”