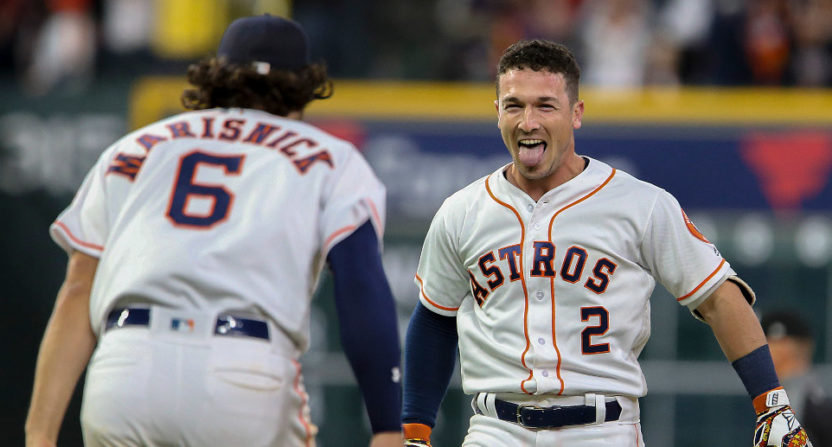 With each MLB team playing 162 regular-season games a year, it feels like there shouldn’t be that many really rare situations. But boy, did the Houston Astros and San Diego Padres provide one Saturday, with the Astros winning that game 1-0 in the bottom of the 10th off a walk-off infield pop-up from Alex Bregman (#2 above). That came with two outs and a full count, so pinch-runner Derek Fisher was running hard from second despite what looked like an easy play. But Padres’ pitcher Phil Maton left the pop-up for first baseman Eric Hosmer, San Diego’s prized offseason signing. Hosmer charged in from first and overran the ball, and it dropped, allowing Fisher to score the winning run:

Good things can happen when you put the ball in play. ¯_(ツ)_/¯#walkoff pic.twitter.com/wKJRkLrM7i

How insanely improbable was that? Well, MLB director of baseball research and development Daren Willman has one way to express it:

So, you’re not even telling me there’s a chance? Amazing. And MLB.com’s Brian McTaggart got some incredible quotes from the Astros:

“I thought that I just missed it and that I should have crushed it,” Bregman said.

…”It’s a high popup with the roof and anything can happen,” Fisher said. “Obviously, at that point of the game, you have to take advantage of anything you can, and we did.”

…”If you watch enough games I guess you see everything,” Astros manager AJ Hinch said. “They tell you that. I’ve never really seen that before. That wasn’t very predictable, except you could tell at the end they were having a hard time getting to the ball. Hosmer was racing pretty fast. Very unexpected, but we’ll take it.”

…”That’s one of the good things about this team,” Bregman said, “Derek Fisher doesn’t take the play off. He doesn’t take anything for granted. He’s busting his butt from second base and scores. He could have easily have jogged and said, ‘Aw, he caught it’ or whatever. But that’s not how we play here.”

Absolutely, and that’s part of what made this play so remarkable. In many cases, the batter might not even go to first on a seemingly-sure-thing pop-up like this, and many runners might not be running full-out on a ball like that, instead conserving their energy. So even if that drops, it could still conceivably turn into an out at first or at least not produce a run, and then it would be remembered as more of a weird note than a game-winning play. But the effort here from Fisher turned it into the winning run, and given their offensive struggles in this series so far, the Astros will definitely take that.

The scoring decision to rule this a hit rather than an error is interesting too, and it made for some notable stats. That was Houston’s first hit of the Padres’ series with runners in scoring position, following an 0-for-9 showing Friday and an 0-for-6 performance to that point Saturday. And they only got six hits all day, three off starter Bryan Mitchell in five and two-thirds innings and one each off relievers Kazuhisa Makita and Robbie Erlin before Bregman’s pop-up off Maton. So this was important, especially as it gave offseason acquisition Gerrit Cole a win in his first home start after an impressive seven-inning, five-hit, 11-strikeout performance (which combined with 11 in his road debut to give him a franchise record for strikeouts in a player’s first two starts). It also moved the Astros to 7-2, tying their record for the best start in franchise history.

Oh, and as Chandler Rome noted in his Houston Chronicle game story, this only happened thanks to Fisher pinch-running for catcher Brian McCann after a single, and that came after McCann went into the camera well chasing a foul ball an inning earlier. And this almost didn’t happen, as Fisher was initially called out stealing second, only for that to be overturned on review after Hinch challenged. But it wasn’t the only time Fisher pinch-ran for McCann and was driven in by Bregman from second base at home in the bottom of the 10th; that exact scenario took place in Game Five of the World Series last year. So I guess we have seen this story before. Just not on an infield pop-up.