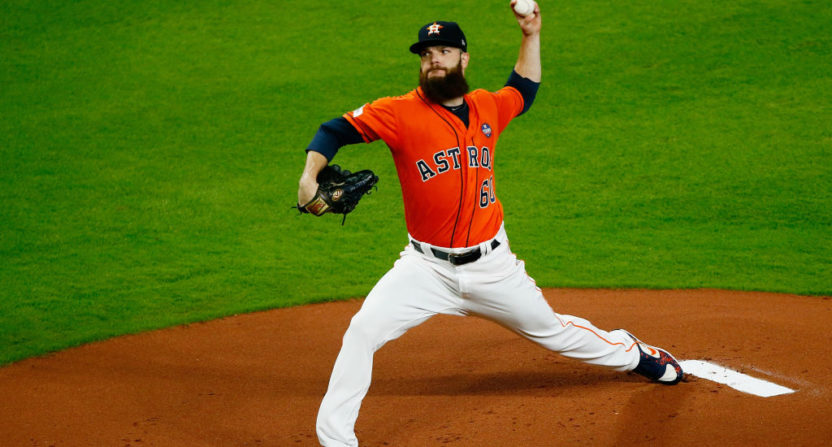 A Bird in flight, not in speed.

Yankees rookie first baseman Greg Bird was the only New Yorker to touch the plate in Game 1 of the ALCS. He slashed the Yankees’ deficit to 2-1 by skying a huge two-out, ninth inning home run. In the fifth, he broke from second on a scorching base hit into left that had a 105-mph exit velocity off the bat of none other than Aaron Judge. But Bird’s slow legs were no match for Marwin Gonzalez’s power arm that threw him out at the plate — proving to be a costly play as the Astros claimed Game 1 of the ALCS with a 2-1 win on Friday night in Houston.

Who silenced the Yankees bats?

A deceiving Dallas Keuchel. The lefty made the threatening Judge and ALDS hero Didi Gregorius look silly at the plate — forcing them to brashly swing at hooking sliders. Keuchel threw seven scoreless frames on just four hits while striking out 10 and walking one (no surprise that it was Judge). Like a shark, Keuchel went after Brett Gardner in the fifth, throwing slider after slider to the bottom right corner before Gardner gave in and swung for the dramatic strikeout.

Jose “The Machine” Altuve backed his starter’s dominant performance with one of his own. The AL MVP candidate went 3-for-4, masterfully stealing second base and later scoring the Astros’ first run. In the fourth inning, Altuve fielded a zipping grounder to second by diving onto the dirt and springing back up on his feet, throwing Didi Gregorius out at first for an incredible play.

Meanwhile, the marathon horse Masahiro Tanaka used a four-pitch arsenal to puzzle the Astros. Besides Altuve, only Carlos Correa and Yuli Gurriel rocked hits. He capped the game on 89 pitches through six, letting a deep Yankee bullpen rest easy on Game 1 of a potential seven-game series. Tanaka’s outing was impressive and promising for the Yankees going forward, despite the loss he was handed, but Keuchel’s was better.

Other things to note: