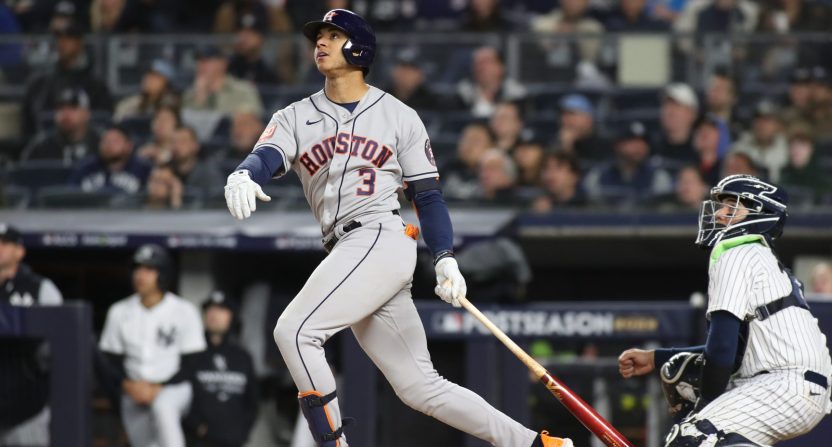 First, we’ll take a look at the World Series title odds, and then we’ll break down five appealing player prop bets to consider.

It should be no surprise that the Astros — who are in the World Series for the fourth time in six years — are viewed as the clear betting favorites to win the championship.

FanDuel has the Astros at -190 on the moneyline to win the World Series, while the Phillies come in at +165.

As for what projection systems think, FanGraphs gives the Astros a 54.4% chance to win the title, while FiveThirtyEight favors the Astros much more at 67%.

Note: these are not necessarily what we’d view as the most likely results. We’re looking for value and a few darkhorse candidates.

Bregman comes in at sixth among players most likely to lead the World Series in home runs. At 13/1, there’s a lot of value here (FanDuel has it as 11/1).

The right-handed hitter loves the Crawford Boxes down the left-field line at Minute Maid Park, as he showed in the ALCS.

Alex Bregman with a 3-run homer for the Astros in Game 2! ⚾️💣#ALCS pic.twitter.com/m02ugm1bCX

In the regular season, Bregman hit 16 homers in Houston, compared to seven homers on the road (he also batted .305 at home, compared to .215 on the road; he’s +750 lead the series in hits, which also makes for an appealing bet). While Bregman hit 23 total home runs, Baseball Savant thinks he would’ve hit 31 homers if all the games were at Minute Maid Park (that’s three-plus more homers than he’d be projected for in any other park).

And the first two games are in Houston. If the series goes seven games, four games will be in Houston (Baseball Savant also thinks he would’ve hit 24 homers in Philadelphia, so his power game plays fine there too).

The two-time NL MVP is the fourth player — but the first Phillies player — listed among the favorites.

Harper’s 11 RBI this postseason are tied with teammate Rhys Hoskins for the most in MLB, and he’s put together a ridiculous 1.351 OPS so far over 11 postseason games.

"HARPER… THE SWING OF HIS LIFE!"- Joe Davis pic.twitter.com/kAkVVcqJG1

A red-hot Harper is as good as hitting gets, and the NLCS MVP loves the big stage and moments.

This is a very under-the-radar pick, with Segura a distant 11th among the players listed on these odds.

But Segura is the classic “professional hitter” who’s very consistent in his game and can hit elite pitching (of which the Astros have plenty). Segura is a career .285 hitter that hit .277 in 2022 and .290 in 2021. He was limited to 98 games this season due to injury, but he’s healthy now and has come through with some big hits for the Phillies.

Jean Segura with a 2-run single to give the Phillies a 3-1 lead! ⚾️#NLCS pic.twitter.com/6adsODOmZh

Don’t be shocked if Segura is one of the most impactful bats in the World Series and leads in hits.

The Astros lost superstar shortstop Carlos Correa over the offseason… and then replaced him with a rookie that went on to be worth 4.8 wins above replacement (WAR) per Baseball Reference.

Peña showed off a solid — with the upside for much more in the future — power/speed combo that included 22 home runs and 11 stolen bases in his rookie campaign. He’s looked even better in the postseason, crushing three home runs, two of which were crucial blasts in series-winning games.

In the 18th inning, Houston's Jeremy Peña breaks a scoreless tie with a home run. pic.twitter.com/GkwjbW4hm9

Trailing 3-0 in the series, the Yankees jumped out to a 3-0 lead in Game 4 against the Astros. But after Martín Maldonado and José Altuve walk, Jeremy Peña ties it with one swing. pic.twitter.com/uH5IZyFob4

Oh, and Peña is an elite defensive shortstop already. His 15 defensive runs saved in the regular season were tied for first among MLB shortstops.

Peña makes big plays with his bat, baserunning, and defense at a premium position. It’s led to him being named ALCS MVP, and it could lead to a World Series MVP. If Houston wins the series, Peña’s contributions on both sides of the game will likely be a big reason why.

We just combined these two players, as the odds and reasoning for each bet are very similar.

Basically, if the Phillies are winning the World Series, it likely includes at least one of these pitchers putting together multiple great starts (potentially up to three appearances).

These are each ace-level arms for Philadephia that are capable of outdueling Justin Verlander and company.

It appears that Nola will get the Game 1 start, which is why he’s listed slightly higher than Wheeler among the favorites. But they each will have the opportunity to be huge difference-makers in the series.