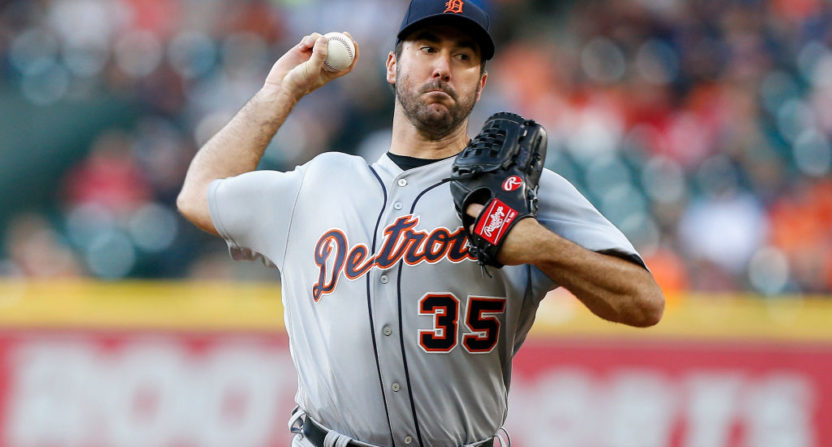 Houston Astros ace Dallas Keuchel made it clear that he was unhappy about the team’s (lack of) non-waiver trade deadline activity. The team had — and still has — the best record in the American League, but could’ve used some starting pitching help to boost their chances in the postseason.

It’s unknown how much Keuchel’s comments influenced the front office’s thinking and aggressiveness, but he at least has to be thrilled with what they ultimately got done on Thursday night.

The Astros and Detroit Tigers have agreed to a deal that sends 34-year-old starting pitcher Justin Verlander to the Astros for three prospects.

The Tigers have traded Justin Verlander to the Astros, I'm told.

What @JonHeyman said: The Tigers are getting Franklin Perez, Daz Cameron and Jake Rogers for Verlander, I'm told.

The trade was completed after it had initially been reported that a potential deal between the two teams fell through, due to Verlander not wanting to waive his no-trade clause to join the Astros.

The Tigers’ brass reportedly met with Verlander late into the night at his Detroit area home, and he eventually agreed to allow the deal right before the waiver trade deadline buzzer. However, the Chicago Cubs — who were also trying to acquire the right-hander — were Verlander’s first choice, according to Jon Morosi.

Source: #Tigers officials met with Justin Verlander at his home in suburban Detroit, late into the night, as trade drama intensified. @MLB

#Cubs had been Verlander's first choice. He wanted to let that play out as long as possible. He agreed to #Astros deal at final minute. @MLB

And the last-minute deal led to Jon Heyman making a bad joke (the Astros play at Minute Maid Park).

verlander deal was completed with a minute to go. so technically, it was Minute Made

While Verlander’s overall season numbers don’t jump out at you on paper, he’s been outstanding in the second half, with a 2.41 ERA in 67 1/3 innings pitched.

And Verlander’s issues in the first half seemed unsustainably bad. The primary problem was his walk rate, where he was allowing 4.39 walks/9 innings pitched. In the second half, he’s allowing just 2.14 walks/9, which is much closer to his career rate of 2.75/9.

The most encouraging thing for Verlander both for this season and over the next few years, is that the stuff is as good as ever. He’s been averaging 95-96 mph on his fastball velocity every month this season, good for his best average fastball velocity since 2010 according to FanGraphs‘ data. And he’s one of the game’s top workhorses, with nine seasons of at least 200 innings pitched (and it could soon become 10, as he’s at 172 IP in 2017).

So, this acquisition made tons of sense for what appeared to be a vulnerable Astros rotation for the postseason. Verlander and Keuchel give the Astros are a very formidable 1-2 in the rotation, to go with baseball’s best lineup.

Additionally, Verlander is signed through 2019, with a vesting option for 2020 ($22 million if he finishes top-5 in the 2019 AL Cy Young voting), so this move isn’t just about 2017 for the Astros. Verlander was such a coveted arm on the trade market, largely because of how weak the upcoming crop of free-agent pitchers is. And with Verlander, it’s not a massive long-term commitment, whereas pitchers like Yu Darvish and Jake Arrieta are going to demand five+ year deals this offseason.

But Verlander is still an expensive commitment through at least 2019, and for a rebuilding Tigers organization, it made sense to unload much of that salary and acquire prospects. (That’s especially the case after they traded star outfielder Justin Upton to the Angels earlier in the day; don’t go halfway in on a rebuild.)

And the Tigers agreeing to pay a solid chunk of the money allowed them to acquire quality prospects in the deal, which should certainly make their fans more accepting of the decision to trade the franchise’s longtime star.

Tigers did very well. Franklin Perez a No. 3 at least, maybe more. Jake Rogers excellent on D and can hit. Daz Cameron a nice lotto ticket.

Astros have the 3rd best farm system in baseball. Tigers fans should be thrilled with getting 3 of their top 11 prospects.

With all the caps and such it's not like the Tigers could just plow $16 million into foreign amateurs easily. This is how you buy prospects

It’s hard to not really like this deal for both sides.

Yes, it’s tough if you’re a Tigers fan to give up a franchise icon in Verlander, but it was in the best interest of the organization moving forward. Odds are that — with or without Verlander — the Tigers weren’t going to contend for a championship over the next two seasons, and this move helps accelerate the rebuild.

For the Astros, they’re now arguably the team to beat on the AL side of the postseason bracket, and they will still have Verlander on a title-contending team for at least two more seasons. It may have come down to literally the last minute, but the Astros finally got their guy, and that’s very bad news for the other AL contenders.