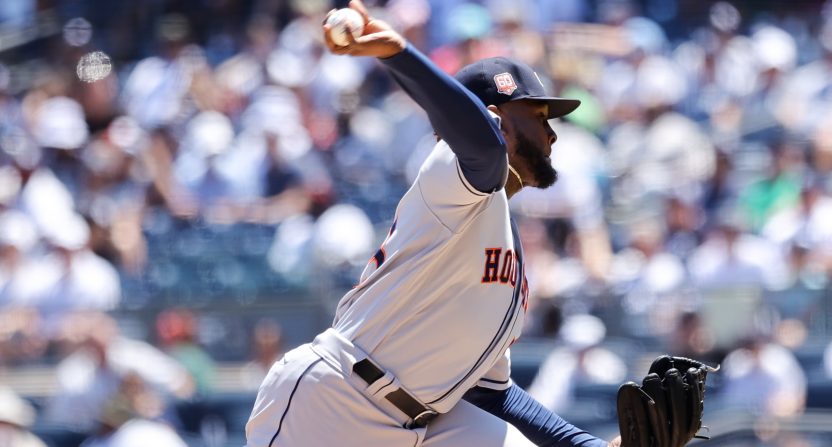 On June 11, 2003, the Houston Astros threw a combined no-hitter against the New York Yankees in the Bronx. Just over 19 years later, history repeated itself.

While the 2003 no-hitter featured six pitchers, the Astros only needed three this time. Cristian Javier did most of the work, going seven innings before being pulled after throwing a career-high 115 pitches. Héctor Neris handled eighth inning duties and got into some trouble by walking two hitters, but got through the inning without allowing a hit when Aaron Judge hit into a fielder’s choice for the third out.

Watch @MLBNetwork to see if the @Astros can complete the no-hit bid. https://t.co/15EatBXUTp pic.twitter.com/mqfd5ErWaD

That cleared the stage for Ryan Pressly, who closed out the no-hitter in the ninth inning, last retiring Giancarlo Stanton.

Entering Saturday, the Yankees had MLB’s best record and led the league in runs scored, OPS and OPS+. Any no-hitter is notable. It’s even more notable when it comes against that kind of opponent. With that in mind, this effort caught the attention of the MLB world.

No-hitter in the Bronx, against the Yankees.

I did not expect to type those words at any time in 2022. @MLBNetwork @MLB

They did it. The Astros have no-hit the Yankees, with Cristian Javier (7 innings), Héctor Neris & Ryan Pressly throwing Houston's second combined no-hitter at Yankee Stadium, in a 3-0 win.

Astros are the only team to no-hit the Yankees since 1958, and both have been combined.

Like clockwork, every 19 years and 14 days, a group of Astro pitchers no-hits the Yankees.

Someone needs to revise the Yankees Wikipedia page to reflect their actual owners, the Houston Astros

It's interesting to see the Yankees actually play a good team this year.

They can't keep up.

That is the highest win percentage ever for any AL/NL team entering a game in which they were no hit (min. 50 games into a season).

After a nightmarish loss on Thursday night, the Astros have made a big, big statement the past two games, especially with no-hitter.

Javier went seven innings, walked one and struck out 13 hitters. Neris walked two and struck out one in his inning of work. Pressly pitched a perfect ninth inning, striking out two before the game-ending groundout from Stanton.

The series between these two American League powerhouses started terribly for the Astros, who blew a three-run ninth inning lead in a walk-off loss on Thursday. Since then, things have gone smoother. Houston defeated the Astros 3-1 on Friday, allowing only five hits. Now, the Astros have thrown a no-hitter and ensured that they’ll do no worse than split the four-game series in the Bronx.