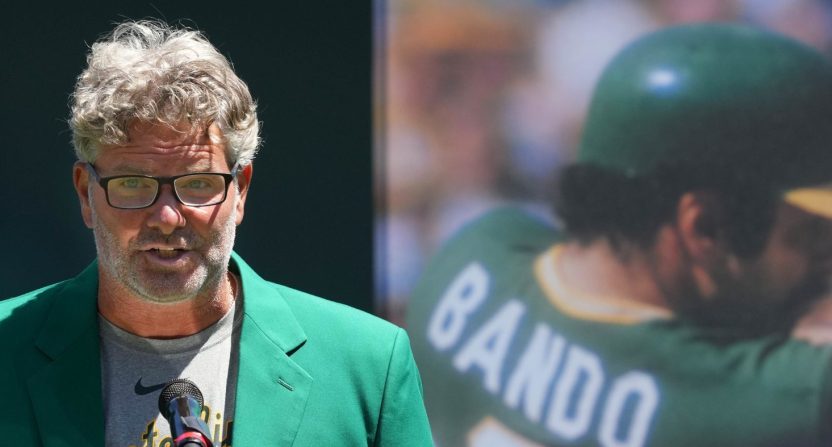 The MLB world was struck with some horrible news on Saturday regarding former All-Star third baseman and general manager Sal Bando.

The Oakland Athletics posted a statement from the Bando family on social media on Saturday revealing that Sal Bando had passed away on Friday after a lengthy battle with cancer at 78 years old.

A statement from the Bando family. pic.twitter.com/vAi9wYdwjF

Bando played for the Athletics for 11 seasons from 1966-1976, earning four All-Star appearances in his career along with being a huge part of three World Series Championships.

He then joined the Milwaukee Brewers and played there from 1977-1981 for the remainder of his career. The Brewers organization also posted a heartfelt statement after his unfortunate passing.

The Brewers mourn the passing of former third baseman, general manager and 2014 Wall of Honor inductee Sal Bando. Our heartfelt condolences go out to Sal’s family, friends and fans. pic.twitter.com/IyFxLcYhk9

His role in baseball following his playing career was also extremely impactful, first working for NBC in a broadcasting role alongside Bob Costas.

He then transitioned into a front-office role with the Brewers, becoming their general manager in 1991 and serving in that role until 1999.

Bando was undoubtedly one of the influential figures in his era of baseball, and his loss clearly had a profound impact on many around the MLB world.

Heartbreaking to see the news of the passing of ⁦@ASU_Baseball⁩ & ⁦@Athletics⁩ legend Sal Bando. What a wonderful man! Loved our many conversations and interactions over the years. An amazing ballplayer on top of being such a welcoming, kind and engaging man. pic.twitter.com/OucVrKpcuv

Had this pennant (not this exact one) in my room as a kid. "The Swingin' A's" were the coolest team. Always wanted to see them when they came to Boston.

Sorry to hear about the passing of Sal Bando, first FA in franchise history and a cornerstone in turning the organization into a winner. Made Wisconsin his home and was a community leader. #RIP https://t.co/7ykbxT1oMU

“It can never be overstated the role Sal has in Brewers’ history, both on and off the field,” said Selig via Tom Haudricourt formerly of the Milwaukee Journal Sentinel. “I cannot emphasize that enough. When he joined us as a player, that was a big day in our history.”

Bando is survived by his three sons and Sandy, who is his wife of 54 years.