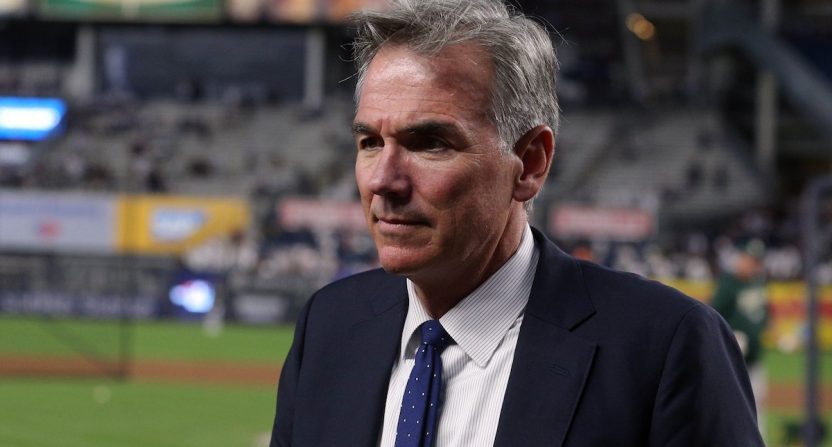 Baseball without Billy Beane? The idea doesn’t quite seem possible, yet according to the Wall Street Journal, Beane is set to leave the Oakland Athletics’ front office due to a pending financial conflict of interest involving the Boston Red Sox.

How does that work?

As the WSJ explains, Beane is a co-chairman of RedBall Acquisition Corp, a SPAC (Special Purpose Acquistion Company) that aims to raise $500 million for acquiring businesses based in sports, data analytics, and sports-related media. RedBall is currently negotiating a merger with John Henry’s Fenway Sports Group, which owns the Red Sox and Liverpool F.C. of the Premier League.

If Beane is part of a company that owns the Red Sox, he can’t also be part of the A’s front office. Beane also currently owns a minority stake in the team but as a co-founder of RedBall, he presumably has a more personal stake — and greater financial investment — in that company.

Therefore, it probably shouldn’t be a surprise that Beane is reportedly willing to walk away from the team he’s been involved with as a player, scout, and executive for the past 30 years.

Beane — along with his predecessor, Sandy Alderson — played a pioneering role in the use of advanced metrics and data to find undervalued talent that could make meaningful contributions to a roster. Despite a lower payroll, the Athletics have been perennial contenders, largely with players that weren’t necessarily top prospects.

Yet Beane has had a less public role during the past five years, working as the team’s vice president of baseball operations while David Forst took over as general manager. Eventually moving on appeared to be an inevitability.

Beane has sought new challenges, pursuing other endeavors in which he could apply his management and evaluation strategies, notably in soccer. Beane has worked as an advisor to the San Jose Earthquakes in MLS, in addition to Dutch soccer club AZ Alkmaar. He is also part of an ownership group that purchased English Football League’s Barnsley Football Club.

Will Beane take an executive role with Liverpool F.C. once he officially cuts his ties with the A’s? Henry has attempted to hire Beane before, pursuing him for the Red Sox general manager position before Theo Epstein was eventually hired. But according to the WSJ, Beane won’t take any sort of role with the Red Sox despite his pending afflilation with Fenway Sports Group.

Very few executives truly changed a sport, but Beane’s impact on baseball has been significant, with every team utilizing some form of his philosophy and strategy. He was the subject of Michael Lewis’s 2003 book, Moneyball, which looked at how Beane and the A’s managed to compete despite economic shortcomings. That book was adapted into a 2011 feature film with Brad Pitt portraying Beane. How many baseball executives can say that?

When he officially leaves the A’s and MLB, Beane will leave behind a tremendous legacy. Where he chooses to devote his attention next will certainly be worth following. Can he have a similar impact in a different sport or new venture?