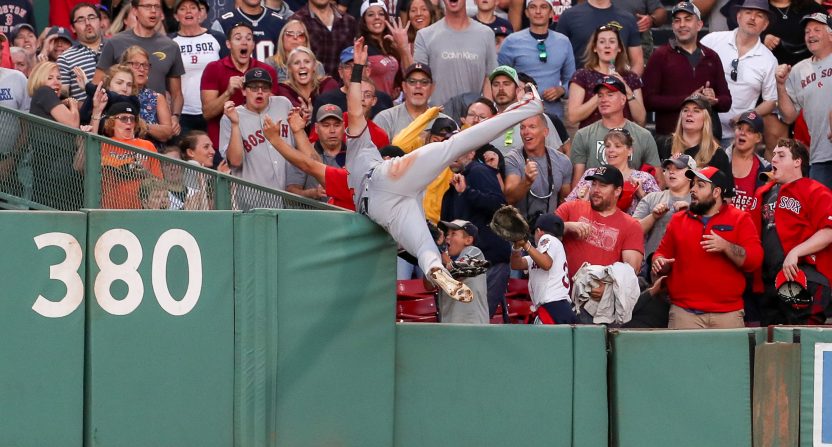 The Baltimore Orioles made the playoffs in 2016. That feels important in order to showcase just how quickly things can spiral downward. Just two seasons later they finished with 115 losses and they’ve followed that up by losing 108 more games in 2019. Their latest season came to a merciful end on Sunday, but not before right fielder Stevie Wilkerson served up one of the best catches of the year.

In the bottom of the eighth of the season finale, the Boston Red Sox looked primed to break a 4-4 tie when Jackie Bradley Jr. launched a bomb towards the right-field bleachers. Wilkerson tracked it all the way to the short Fenway Park wall, leaped into the air to grab it, and then almost fell into the seats trying to keep his balance. Somehow, he stayed in play.

In true Orioles fashion, they squandered all the good vibes with that catch in the ninth inning. With Mookie Betts on first, the Red Sox batter grounded into what could have been a double play but the ball bounced off the infielder and went into the outfield. Wilkerson picked up the ball and, perhaps sensing that Betts wasn’t going to make a run for it, lazily threw the ball towards the catcher. Seeing that he could beat the throw, Betts made for home and scored before the ball got there, ending the game and, mercifully, Baltimore’s season.

Such is Baltimore Orioles baseball. Still, it was a pretty cool year for Wilkerson, who earlier this season became the first position player to ever record a save.

Who knows what else he’ll accomplish next season. As for the Orioles, the only place to go from here is up. Right? RIGHT?