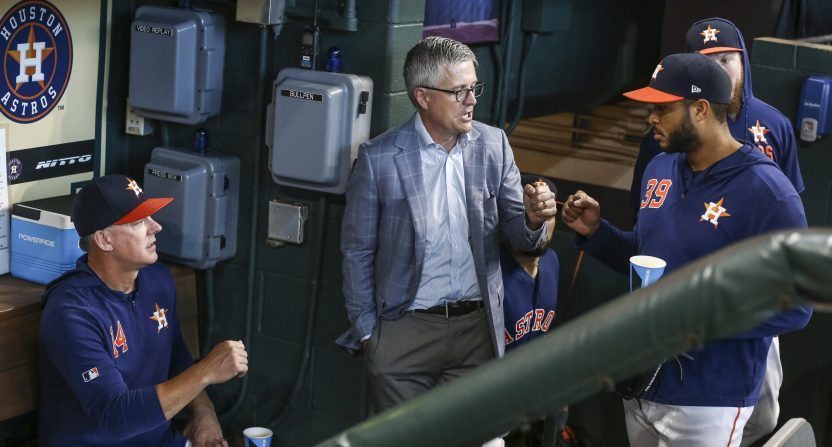 On Monday, MLB announced the punishments for the Houston Astros in the sign stealing scandal that was broken wide open this fall. Those punishments include a $5 million fine, loss of the team’s first and second round draft choices in both 2020 and 2021, and one-year bans for manager AJ Hinch, GM Jeff Luhnow, and former assistant GM Brandon Taubman, who the organization fired in October.

These punishments, on the surface, look huge. They include fines, suspensions, and loss of draft choices. But when you actually dig into the discipline enforced by MLB, you’ll realize how woefully inadequate the punishments are.

We’ll start with the easy part: the fine. This is the maximum fine allowed under MLB’s Constitution. That fine represents half of the yearly salary of Houston closer Roberto Osuna, and 2.4% of their estimated $209 million Opening Day payroll. They can stomach it.

The loss of draft picks is the most noteworthy thing here. In addition to the four picks they’ll forfeit, Houston will lose the ability to spend the pool money associated with those picks, which Baseball America’s Carlos Collazo estimates at $3.4 million in 2020 and $4 million in 2021. This would be less of an issue if the Astros still had an incredible farm system, but many of their top prospects have either graduated to the majors (which isn’t a bad thing!) or been traded away in recent years, leaving them with one Top 100 prospect, per MLB.com (pitcher Forrest Whitley). And as we say about the draft, it’s a crap shoot and anything can happen. Houston had the #1 overall pick in three straight years, only signed two of them, and only saw one of them make the majors (Carlos Correa). Stripping draft picks, especially the team’s first two picks for the next two years, is a huge deal and probably the best baseball can do in this situation, but it’s far from a death sentence.

But when you get to the three suspensions, that’s where the punishments lose their teeth. First off, to worry about semantics, they’re actually not even a year long – the suspensions start today, and end the day after the World Series, per the MLB.com writeup.

The suspensions of Luhnow, Hinch and Taubman are to begin immediately, ending on the day following the completion of the 2020 World Series.

Second, because of the timing of the suspensions, the Astros were able to embark upon most of their offseason work at improving their roster (which was admittedly a bit light). It’s not as if they’re going into the 2020 season rudderless. However, they won’t be getting a boost from Hinch and Luhnow in 2021 – owner Jim Crane took matters into his own hands and fired them both, taking over as the head of baseball ops on an interim basis.

Crane said AJ Hinch and Jeff Luhnow have been dismissed.

However, it’s the suspension for Taubman that really throws me off here. As the MLB report notes, he was suspended for essentially being an unrepentant asshole.

As for Taubman, the report stated that due to “his inappropriate conduct in the clubhouse” on Oct. 19, 2019, he will be ineligible to perform services on behalf of any Major League club — either as an employee or independent contractor — through the end of the 2020 World Series.

What MLB is saying here is that Taubman’s actions (yelling “Thank God we got Osuna!” in the Astros clubhouse after the 2019 ALCS at female reporters) deserved the same punishment as Hinch and Luhnow’s involvement in the sign stealing scandal. Grouping his punishment in with the others, and making it the same length of time, seems incredibly strange to me. He shouldn’t work in baseball again and deserved a significant punishment, but what Luhnow and Hinch did had a much more significant impact on the field than Taubman’s actions. It also minimizes the seriousness of the sign stealing – a year for being an abusive asshole in the clubhouse and a year for engineering a complex sign stealing scheme? They’re not even in the same realm, and putting the punishment for the two on the same level is bizarre, at best.

Crucially, no punishment has been doled out to Red Sox manager Alex Cora who (once again, per the MLB report) was the ringleader of the sign stealing system or current Mets manager Carlos Beltran (an Astros player when the system was in place, and one who helped come up with the system), though punishment for Cora is reportedly in the pipeline. It would be somewhat ironic if the manager of the Red Sox or Mets was punished just as much as the manager of the Astros, who has been banned for a year (and was punished by his owner in terms of uh, losing his job).

When it comes down to it, the Astros (rumored to be considering bench coach Joe Espada, who interviewed with numerous clubs this offseason, as their new and/or interim manager) are probably still going to be the favorites in the AL West. They return their entire starting lineup from 2019, including re-signed catcher Martin Maldonado. The rotation does lose Gerrit Cole (and Wade Miley, who had a good year but is a far less significant loss than Cole), but they’ll have a full year of Zack Greinke and Jose Urquidy (who shined in September) behind Justin Verlander, while Lance McCullers Jr is also expected to play a part while returning from Tommy John surgery.

Yes, the Astros will be scrutinized, analyzed, and criticized in 2020 and beyond. But they won 107 games last year, their 2017 World Series and 2019 AL champions banners are still flying above the field at Minute Maid Park, and nearly the entire band (aside from Hinch, Luhnow, and Cole) is back together for the 2020 season. MLB dropped the hammer onto the Astros, but it wasn’t a sledgehammer to the head. It was a claw hammer to the foot. This will hurt Houston in the short-term, but long-term, the franchise will be able to move on.