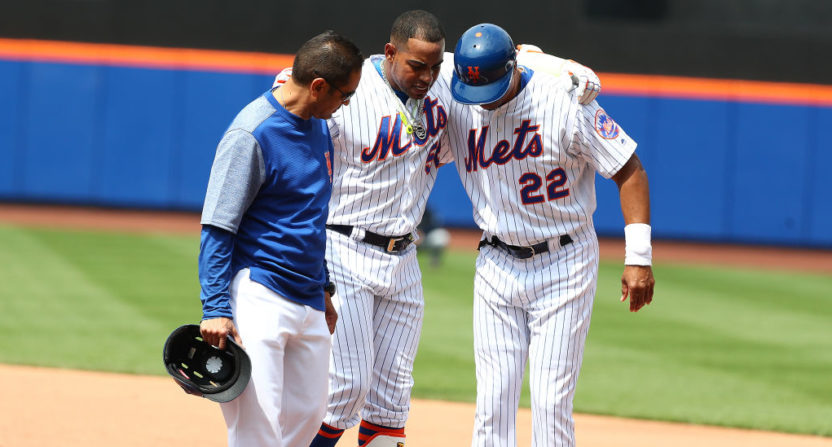 Teams seem to be adapting well to one of the recent changes in MLB — the shrunken, 10-day disabled list. Since 1984, we’ve gotten used to the 15-day DL. That list was reserved for the medium-priority injuries. And it was a little jarring to see your favorite player on the 15-day.

But the 10-day? Only eight weeks into the season and we’ve already seen durable players like Dallas Keuchel or Robinson Cano on it.

Every other day, it seems, we are alerted of a key player’s ingress to the DL. Are injuries suddenly plaguing teams?

The compressed number of days make it easier for managers to handle an injury by giving the player a break, while at the same time, strategically, bringing in a fresh arm or bat.

In addition to Keuchel and Cano, Madison Bumgarner, Mike Trout, Cole Hamels, Noah Syndergaard, Corey Kluber, Yoenis Cespedes, Felix Hernandez and Zach Britton are currently or, have at some point this season, visited the 10-day. Cano hit the DL for only the second time in his career, and the first time since 2006. Will we see durable players like Cano land on the list more frequently?

The increased use of the DL is quite logical. And managers are taking full advantage of it.

Giving a player some rest will help him down the stretch. Especially with elite players, managers are hoping their stars remain healthy for October.

And with bottom-of-the-lineup batters and back-of-the-rotation pitchers, managers can swap in minor-leaguers and swap out struggling players comfortably. They did that during the 15-day era too. It just wasn’t as efficient.

Such is the case with Marlins’ reliever Junichi Tazawa, who’s off to a rough start to the year. In 15 innings of work, batters are hitting .214 against him. He allowed 11 earned runs, four home runs and spiked his ERA up to 6.60. A day after his last appearance, in which he allowed four earned runs in one inning pitched, the Marlins made a series of roster moves.

Miami recalled Odrisamer Despaigne and Brian Ellington from Triple-A New Orleans, and Tazawa went to the 10-day DL with an inflamed rib cartilage. Phantom or not, it let the struggling Marlins bring up minor-leaguers to revive a dull bullpen, while leaving Tazawa to fix his miscues for a small amount of time.

A shorter stint on the DL means a quicker turnaround. Which means a team isn’t left without its key player for too long. Because unless a rotation is phenomenal, losing your ace for three starts isn’t sufficient for most teams. Losing that pitcher for just one or two starts (remember, it’s 10 days, not games) is certainly doable.

Beyond that, it benefits the player tenfold. Avoiding the DL entirely and pushing through the injury could make it worse. Hopping on the 10-day allows it to heal while only missing a handful of games in a 162-day work schedule.

Gone are the days of pretending players are healthy so managers can hold onto the elite against a challenging opposition. And, if you couldn’t tell, that’s a good thing. Players can rest, see a trainer, bounce back. It’s also good for fans. If players aren’t toughing out quite so many minor injuries during the season, they’ll be fresher when they’re on the field, creating a higher-quality game.

A possible detriment to the 10-day is the potential overuse of the DL. Managers may place minor injuries on the DL in fear of it getting worse or, as previously stated, to give him some due rest. At the tail end of May, 105 players are currently on the DL.

This isn’t the first time we’ve seen the 10-day DL. That and the 7-day were all we had before 1984. The 15-day left a 33-year mark on MLB, wrapped up its belongings, and moved out. But during those 33 years, a new medium called the internet was introduced to us. And that technology brought with it an incredible way for fans to feel fully invested in any given season.

How? Fantasy baseball. Now, the decreased number of DL days causes avid fantasy members to scramble to their phones and shop for new players spasmodically.

Cano is on the 10-day? Better look for a short-term infielder. Aroldis Chapman is out? Let me check if anyone’s picked up Dellin Betances. So on, so forth.

Teams are much quicker to place players on the shelf for 10 days (i.e. Marlins and Tazawa) and call up someone from the minors. What makes this frequency interesting for teams and fans alike? Many backup players are stepping up to the plate in the absence of the All-Star resting on the DL.

Aaron Hicks — the Yankees’ fourth outfielder and on-again, off-again fill in for Jacoby Ellsbury —  is slashing .291/.429/.555 with eight homers and 21 RBIs this season. Sam Travis, a 23-year-old fill-in for the Red Sox’ first baseman Hanley Ramirez, was a jolt of energy for the squad. Suddenly, it’s like the team never lost a beat.

How are fantasy members coping with it? Some are adding another DL spot on league roster. Some are allowing more adds in a given week. The 10-day DL makes fans focus on their fantasy team a little more. And if fantasy players aren’t paying attention, they can kiss their standings goodbye.

In all, the pros seem to outweigh the cons eight weeks into the reawakened 10-day DL. We’ll revisit baseball’s latest experiment in October.