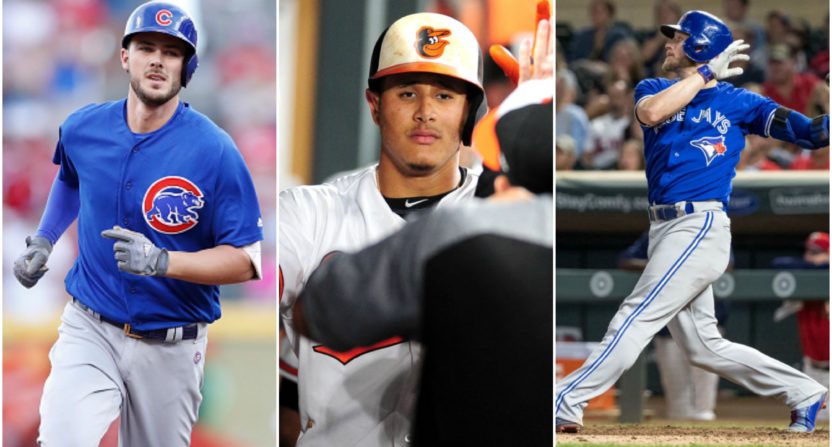 If you’re a baseball fan who spends much time on Twitter, you have likely witnessed angry arguments about who is baseball’s best third baseman. The debate raged at last year’s All-Star break, again when MVP and Silver Slugger awards were announced and again throughout the offseason as various outlets published their own hot-corner rankings.

Between Nolan Arenado, Kris Bryant, Josh Donaldson, Manny Machado, Anthony Rendon and Justin Turner, this is the most impressive position in baseball.

We’re jumping into the debate. We asked our writers who ranks as baseball’s best third baseman, the guy they’d most want for 2018, and well… Rockies fans should probably stop reading now.

Who is baseball’s best third baseman?

Alex Putterman: I’m taking Kris Bryant. After an MVP season in 2016, Bryant wasn’t quite as good in 2017, but he was damn close, even as others at the position got more headlines. Bryant leads all third basemen in WAR over the past two seasons, and it’s not terribly close. He’s a stud offensively and very strong defensively as well.

Rockies fans and RBI lovers will forever argue for Nolan Arenado over Bryant, but simple ballpark adjustments reveal Bryant to be the demonstrably superior hitter, with a 143 wRC+ since 2016 as compared to a 125 wRC+ for Arenado. Both are great players, but context matters, and context favors Bryant.

The third baseman who has come closest to matching Bryant’s all-around production over the past few seasons is Josh Donaldson, who would make for a reasonable pick here as well. But Donaldson is 32 years old and could be due for a decline. Bryant has been the best in recent years, and at age 26 he should continue to be the best for the near future.

Ian Casselberry: For the 2018 season, I’ll take the guy in his walk year. Manny Machado isn’t coming off his best season, batting .259 with a .782 OPS. Though he did hit more than 30 home runs for the third straight year. Wherever Machado ends up playing this year (likely in Baltimore), he has a whole lot to gain by putting together his best season. (And he may have much more to lose with a poor season, especially considering how badly the free agent market has moved this winter.)

As a former shortstop, maybe we should expect that Machado will be better defensively. And moving back to that position might be to his financial benefit, given his offensive production. But only a handful of MLB third baseman can provide the run production and prevention that Machado does. And he’ll be 26 years old when he hits the open market, younger than Nolan Arenado, Kris Bryant or Anthony Rendon will be if they get to free agency. Any team signing Machado will be getting some of his prime years. With a formidable package of power, defense and age, Machado has too much at stake not to have the best year of his career.

Andrew Bucholtz:  For me, Anthony Rendon is the choice. He posted the most wins above replacement (6.9, per Fangraphs) at third base last year, was one of only three third basemen with an on-base percentage above .400 (the others were Kris Bryant and Justin Turner), posted a .301/.403/.533 slash line, and was very good in the field. He had the third-highest fWAR of any position player, behind only Aaron Judge and Jose Altuve. And at 27, I feel he’s in prime shape to have a stellar season in 2018. For the longer term, I might take a younger player like Jose Ramirez (25) or even Alex Bregman (23), but I like Rendon as the pick for this coming year.

Joe Lucia:  If we’re looking at just 2018, give me Josh Donaldson. Before he missed 49 games in 2017, he had logged at least 155 games in four straight seasons, and he’s arguably the best hitter of any third baseman in the league — with a top-tier glove to match. Given that he’s on the wrong side of 30, I wouldn’t want anything to do with him on a long-term deal, but with a one-season qualifier, I’d definitely be all-in on him in 2018.

My honorable mention is Kris Bryant, who has done nothing but smack the shit out of the ball during his three years in the majors. But Donaldson is a significantly better defender and just as good of a hitter, which is why I’m giving the edge to the Blue Jay.

Matt Clapp:  On the surface, I view Kris Bryant, Josh Donaldson, and Manny Machado as basically the same player. And a quick look at 2018 projections makes me feel that way even more. But Donaldson is 32, and while I wouldn’t predict a notable decline comes this season, it’s always possible to see at least a bit of slip in play at this age. And Machado is coming off a season in which he was merely “good” (his 2.9 WAR was only 14th-best for third basemen in 2017 on FanGraphs).

So, the safest pick to me is Bryant. He has averaged 7 WAR (on FanGraphs) over his three seasons, and has played in at least 151 games in all three campaigns. And he just turned 26 earlier this month.

Bryant also had some trends develop last season – career-best walk rate of 14.9%, career-best K rate of 19.2% — that are very promising for his offensive game going forward, and he adds value as a terrific baserunner and with his underrated, versatile defense.