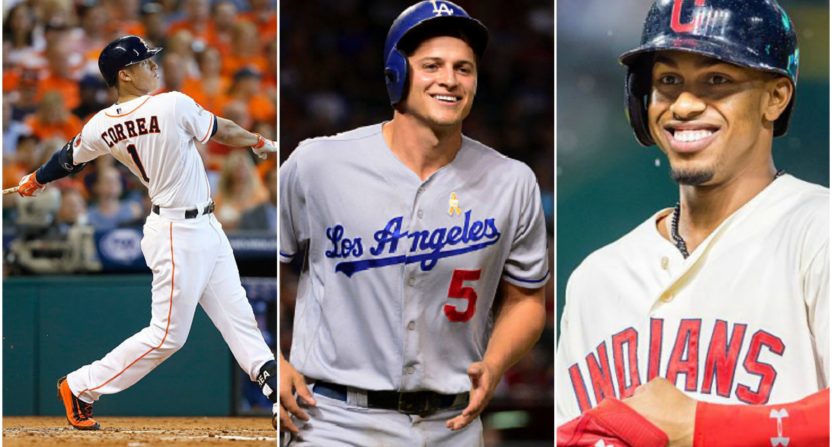 Here’s a list of the shortstops who have accumulated the most FanGraphs WAR since the beginning of 2016:

Not much further down the list, you’ll find 23-year-olds Trea Turner and Addison Russell. The point is, there are a whole lot of incredible young shortstops in the Major Leagues right now.

With that in mind, we asked our staff to decide, of all these young studs, who is the best one. Here are their answers:

Who is the best young shortstop in baseball?

Joe Lucia: I think I’m going to go with Francisco Lindor, for a few reasons. First, we know he’s going to stay at short long-term, which isn’t something we can say about Correa, Seager, or even Turner. Second, his glove is incredible—he’s not just a great hitter playing shortstop because he’s a good athlete and played shortstop in high school. Third, while his offensive production pales in comparison to some of the other top young shortstop in baseball, he’s a damn good hitter that is still improving at the dish. He’s having such a great year in 2017 with a below average BABIP. Slide that up to where he was in 2015 and 2016, and imagine the type of season he’d be having. It’s scary.

Matt Clapp: You can’t go wrong with about 10 of these guys, but going forward, I’d take Carlos Correa over the rest of the group. The 22-year-old is already a star, but he has a chance to become a top-five player in baseball, and quickly. We’re already seeing that transformation this year. I’d roll my eyes at an Alex Rodriguez comp for every young player, except for this one. He really has that same type of ability with his power, on-base skills, baserunning, and defense. And he’s a monster at 6-foot-4, 215 pounds.

Now, with that size comes the question of Correa’s long-term position, but for right now he’s just fine at shortstop. If his bat keeps improving as expected (or just stays where it is this year: .310/.388/.532), he’ll still be able to be a star at third base or in left field.

Alex Putterman: It’s gotta be Corey Seager for the simple reason that he already is the player Correa and Lindor are on their way to becoming. Of this group of young shortstops, none has put together a season like the one Seager had in 2016, when he batted .308/.365/.512, put up 7.5 WAR, won NL Rookie of the Year and finished second in MVP voting. He hasn’t been quite as incredible in 2017, but we know from last year that he’s capable of being on of the very best players in the world.

Lindor could soon be a top-5 player in baseball. Correa could get there at some point. Bogaerts and Turner have that kind of upside as well. But Seager is already there.

Ian Casselberry: My head says Corey Seager. But I’m going with my heart on this one. Carlos Correa is my pick for MLB’s best young shortstop. Maybe I’m a sucker for power at that position, but Correa is already a consistent 20-homer threat at 22. What is he capable of when he goes into the arguable prime of his career? He’s not the best defensively, but he has plenty of time to make improvements in that area. (Maybe he’s the most likely of the bunch to move over to third base someday, though Alex Bregman might prevent that.)

What I also like from Correa is his personality and demeanor. He embraces being a star and face of the franchise for a a team poised to be a powerhouse for years to come. It doesn’t seem like a coincidence that the Astros are at their best when Correa is playing at his best.

Liam McGuire: All of these shortstops are outstanding, but Corey Seager is so damn poised for his relative inexperience. He’s got plus power, good plate disciple and plays a premium position. He was already an MVP candidate as a rookie, and it’s a good bet he’ll be in the conversation for the next decade plus.