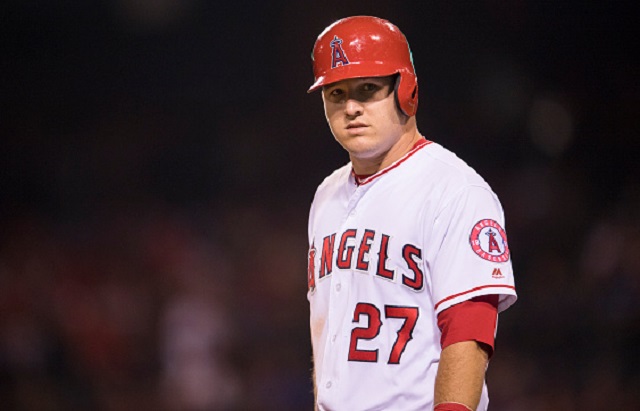 Since his first full MLB season in 2012, Los Angeles Angels outfielder Mike Trout has been the best overall player in baseball. On Thursday, he was recognized for his excellence, winning his second American League Most Valuable Player award in five seasons. And he’s only 25 years old!

No one has matched Trout’s level of performance from an offensive and defensive standpoint during the past five seasons. Voters gave the nod to the Detroit Tigers’ Miguel Cabrera in 2012 and 2013 for arguably superior offensive numbers, especially when he won the AL’s triple crown. But even the most devoted Tigers and Cabrera fan would acknowledge that Trout has a greater overall impact on the game because of his defensive skills in the outfield and speed on the basepaths.

While Trout was not a unanimous selection for AL MVP, he did win rather decisively, finishing with 19 first-place votes compared to nine for Boston Red Sox outfielder Mookie Betts. The majority of BBWAA voters looked at Trout’s .315/.441/.550 triple-slash average, 29 home runs, 100 RBI and 30 stolen bases, along with a MLB-leading 123 runs scored and 116 walks, and saw a clear case for the best player in the league.

Mike Trout was 7th on one ballot. That's 7th as in SEVENTH.

But as mentioned, not every voter put Trout at the top of his or her ballot. Looking at the totals on the BBWAA website, the Angels outfielder collected eight second-place votes and one third-place vote. He also placed fifth on one ballot and seventh on another. Perhaps it shouldn’t be a surprise that two of the voters who had Trout lower than second on their ballots were East Coast writers. George King of the New York Daily News and Sean McAdam of CSN New England both gave their first-place votes to Betts and had AL East players in their top two spots.

Voters tend to favor players they see and cover more often throughout the season. This has always been the case in MLB awards voting. Besides, it’s not like Betts wasn’t a deserving MVP candidate, batting .318 with 31 homers, 113 RBI and 26 steals.

If you had Mike Trout 7th on your AL MVP ballot, please raise your hand. We need to talk.

However, what about that seventh-place vote? That was from John Hickey of the Oakland Tribune. He placed the Texas Rangers’ Adrian Beltre at the top of his ballot, the only BBWAA voter to do so. No one else had Beltre higher than fourth on their ballot, but that’s not an entirely objectionable selection. Beltre finished with a .300 average, .879 OPS, 34 home runs and 104 RBI.

Yet Hickey putting Trout seventh on his ballot stood out. Even fellow BBWAA voters couldn’t believe that one. His vote was far different from those of his peers, so much so that it’s worth remembering. Kind of like another seventh-place vote that Hickey once cast, one that may have cost Alex Rodriguez the AL MVP award in 1996. That was notable enough at the time to have been mentioned in an article by the Los Angeles Times‘ Elliott Teaford at the time, and memorable enough that Kevin Shockey of Seattle’s Sports Radio KJR brought attention to it 20 years later in a tweet.

This could be considered relevant to Trout's 7th place vote today… https://t.co/HGpuEkS1rt pic.twitter.com/CChQ5jmuHQ

Back in 1996, Hickey’s seventh-place vote for A-Rod was likely the difference in Texas Rangers outfielder Juan Gonzalez winning AL MVP. There was only a three-point margin between Gonzalez and Rodriguez, one of the closest in the award’s history. Yet Hickey didn’t exactly stand behind his vote at the time. As you can see from the excerpt clipped above, he claimed to have made a mistake on his ballot.

“Asked about his ballot, Hickey first told New York Newsday that he thought he had voted Rodriguez second, later explained how he had dropped the shortstop from fifth to seventh and eventually said, ‘I’m surprised I voted him [Rodriguez] that low.'”

This was 1996, so Hickey couldn’t claim that he filled out his ballot via iPhone and Siri misunderstood “second” as “seventh.” (It’s safe to assume he couldn’t make such a claim 20 years later, either.) As of yet, we don’t know what Hickey’s explanation is. It can’t be that he didn’t see Trout play that much, since the Angels are in the same division as the Oakland Athletics team he covers. Trout hit .418 with a 1.172 OPS in 18 games against the A’s, by the way. (Beltre hit .321 with a 1.015 OPS and six home runs.)

The voters got this one right. Trout was clearly the best player. So how did someone vote him 7th! https://t.co/gHnSJflC8h

If any fellow BBWAA writers have reached out to Hickey regarding his ballot, he either hasn’t responded or those articles have yet to be written. Nor has Hickey himself written anything about his vote.

To be fair, he’s probably been busy covering the news that A’s managing partner Lew Wolff is relinquishing control of the franchise. And it’s probably worth remembering that Hickey’s vote didn’t cost Trout the MVP award, as his vote 20 years ago cost Rodriguez. Now that Hickey’s ballot is public, however, perhaps his editors will ask him to explain himself in writing. Or will Hickey once again be surprised at his own AL MVP vote, taking the time to carefully go over each worthy candidate and place them accordingly in each of the 10 spots on the ballot which he presumably filled out himself?