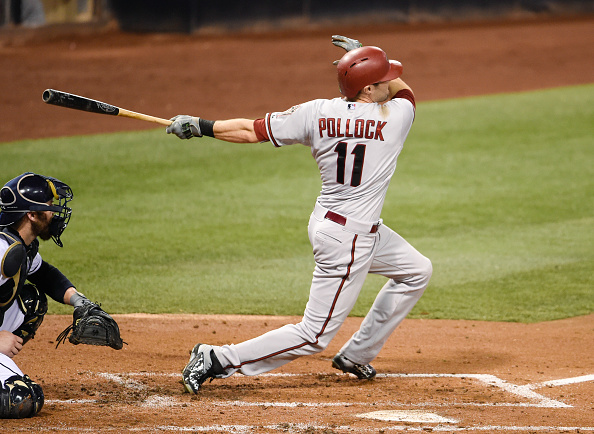 Everyone likes to sound smart. It’s just a fact of life: Everyone wants to be the one to know something no one else knows, especially amongst your group of dumb friends.

So when your dumb friends start talking about who’s going to win the MVP this year and they all agree it’ll be Paul Goldschmidt, you can act all superior and say, “Actually, his teammate A.J. Pollock might have a stronger case.” Then they’ll look at you, awed by your knowledge. And you can just smile and nod your head, slowly.

Who are some other dark horse MVP candidates this year? There are a number of names you could throw out, but let’s narrow it down to five in each league. Study this list and make your dumb friends feel even dumber at the end of the season, because you knew. You knew.

Finally healthy, Pollock came into his own last year by slashing .315/.367/.498 with 20 homers, 39 stolen bases, and winning a Gold Glove for good measure. He established himself as one of the better all-around players in the game, and while his teammate Paul Goldschmidt is the D-Back most think of when considering MVP candidates, Pollock has rightfully put his name in the discussion. He has a real shot to join the 25/40 club this year if he can stay on the field, and if the D-Backs find themselves back in the playoff picture, Pollock could find himself getting a big share of MVP votes.

UPDATE: Welp, so much for Pollock being healthy. On Friday night, the Diamondbacks center fielder fractured his right elbow, and needs surgery. So, it’s pretty safe to say he’s no longer a potential MVP candidate, and hopefully for the Diamondbacks, he’s able to be much of a factor at all this season (there is no timetable for a potential return). Massive loss for Arizona.

Quick, who led the Pirates in WAR last year? Nope, not perennial MVP candidate Andrew McCutchen. It was Marte, who put up very similar offensive numbers to McCutchen’s while also winning a Gold Glove. Marte doesn’t walk very much, but he hits for power, average, and has enough speed where he’s a legit threat to go 20/30 every year.

Like Pollock, he’s overshadowed by his more famous teammate; and like Pollock, if the Pirates defy expectation and make it out of the loaded NL Central, voters may be more inclined to give Marte credit. If he builds on his numbers across the board and continues to play stellar defense, he could be a sneaky MVP bet.

Duffy had one of the best rookie seasons of all time by someone not named Kris Bryant last year, and now he’s penciled in to bat third for a loaded Giants lineup that should be one of the league’s best. Had he not missed more than a month last year while the Giants tried to squeeze whatever was left out of Casey McGehee, Duffy’s numbers would’ve looked more impressive. Still, he managed a 4.9 WAR while showing some pop and playing an excellent third base.

He has the chance to improve on all of his numbers this year playing a full season in the middle of a healthy Giants lineup, and he should challenge for the Gold Glove as well. None of his statistics jump off the page, but Duffy is the kind of player that does everything well. If the Giants make it back to the playoffs, a few of their players will likely get MVP consideration. Duffy may not be the name everyone immediately would think of for that honor, but another strong year would change that.

It’s easy to picture Schwarber hitting 40 homers, driving in a ton of runs, and helping make the middle of the Cubs lineup even more of a nightmare for pitchers than it is now. It’s also easy to picture him struggling at the plate from the constant switching of positions from outfield to catcher, robbing him of the chance to settle into any kind of consistency.

But if Schwarber does find that kind of consistency and plays every day, watch out. He arguably has the most raw power in a lineup that includes Bryant and Anthony Rizzo, and the potential to put up video game numbers is there. Voters love gaudy power numbers. If the Cubs reach expectations this year and Schwarber is a big reason why, expect him to get a lot of votes.

Rookie of the Year and MVP? It’s happened before, and if you believe the hype on Seager it could happen again. He should be a fixture in the Dodgers lineup from day one and will try to build on his impressive showing from last September when he slashed .337/.425/.561 in just 98 at bats. Seager is the real deal, and he’s the odds-on favorite to run away with the NL ROY award. It might be too early to crown him the MVP, but if he has the year he’s capable of having it’ll be tough for voters to ignore him. He’s that good.

A tantalizing combination of power and speed makes Springer a name to watch this year. He’s a legit 30/30 threat if he can stay healthy — a big if — and hitting in a very good lineup in a ballpark built for hitters should mean good things for him. The Astros have a chance to be very good this year, and Springer has the chance to make the leap to elite status if he plays up to his potential. There aren’t a lot of players with his kind of pop and his wheels. If he stays healthy and puts it all together, Springer could be in for a monster year and some offseason hardware to go with it.

Has the sun set on Gomez’s time as a superstar? Has the light of his star faded enough to where he’s just another ballplayer now? Are there any more light metaphors to put here? No? Okay. Gomez was a big disappointment after coming over from the Brewers at the trade deadline, good for just a .670 OPS with Houston while only hitting four homers. He’s another guy with power and speed, and while he may not have as much power as his teammate Springer, he’s a more accomplished all-around hitter who can also play Gold Glove-caliber defense in center.

Does he have a bounce back year in him? The situation couldn’t be better, in the middle of a powerful lineup on a good team in a hitter’s park. Gomez could be in line for a huge year and MVP consideration along with it. Or, he could be terrible again. Hard to say.

Can a guy be a dark horse MVP candidate two years in a row? Betts can, and had he not had such a slow start last year, he might have made my dark horse MVP article from last year look really smart. Betts should improve on his overall numbers this year, and a .800-plus OPS with 25/30 is a definite possibility. The Sox figure to be much improved as a team and Betts should be right in the middle of things. It won’t be hard to get writers to vote for a Boston candidate if the numbers are there, and Betts could be in line for a big season.

It seems like we’ve been waiting for Upton to have the superstar kind of year we all thought he was capable of having, and while he’s had a solid career he hasn’t truly had the “wow” year just yet. Could this be it? The Tigers plan on batting him ahead of Miguel Cabrera and J.D. Martinez, which means Upton should see a lot of good pitches to hit and should score a lot of runs. He’s quite capable of hitting 35 or more homers, hitting somewhere around .280 or better, and putting up an OPS north of .850. Capable, yes, but can he do it? With those hitters behind him, this could be the year that everything clicks into place for Upton. If it does, he could run away with the MVP award.

Cano always seemed to be in the thick of the MVP race until last year, when a terrible first half knocked him off of everyone’s radar. No one is even mentioning him this year as a candidate, but they should. He hit .331 with a .926 OPS in the second half last year, and that torrid stretch has carried over into the spring. Cano managed to cure what was ailing him and looks poised to have a monster year offensively. The Mariners could surprise some people this season and Cano will be a big part of that. If he puts up Cano-level numbers and the M’s win, he’ll be right back in the middle of MVP discussions once again.