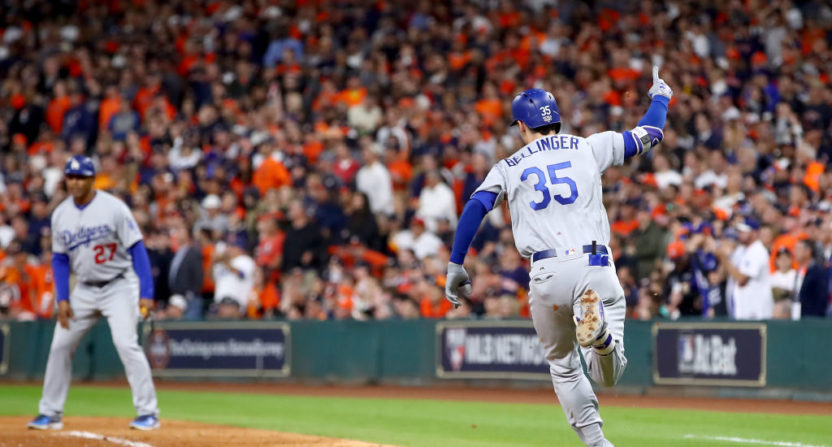 The Dodgers cracked the code.

The Astros’ trumpeted seven straight postseason victories in Houston. They led in 71 consecutive postseason innings in Minute Maid Park. And it all came tumbling down as Cody Bellinger came alive.

Thanks in part to the rookie’s rebirth, the Dodgers climbed back from a deficit to even the series at two apiece on a 6-2 victory right on the Astros’ home turf.

Joc Pederson uncorked a massive three-run home run in the 9th to accentuate a compact Dodgers’ performance that began with the arm of Alex Wood on Saturday night. The southpaw retired 10 straight batters from the 3rd to the 6th inning, punching out three batters in the process. But the third time facing Houston’s lineup, the Astros’ leadoff man got the best of Wood.

It seems whenever we look up, George Springer is mashing. The boisterous gamer erased Wood’s no-hit bid with one swing of the bat, claiming a 1-0 Astros lead in the 6th. Springer collected his third home run of his first career postseason and second against the Dodgers.

But it didn’t take long for the Dodgers to bite back. Bellinger launched his first World Series hit and audibly said, “It’s a miracle” as he claimed second base on a double. The rookie was 0-for-13 against the Astros in the championship round, with nine of those goose eggs being strikeouts.

“Yeah [I felt] relief for sure,” Bellinger said via FOX. “I think everyone knew I was struggling.”

Logan Forsythe reeled him in on an RBI single to center off Harris to tie the game at 1-1. It was nice to see the second baseman connect as his manager, Dave Roberts, continues to platoon him with 38-year-old Chase Utley. Forsythe is batting .304 in the 2017 postseason against Utley’s 0-for-14 skid — making a case for more spots in the starting lineup.

Meanwhile, Charlie Morton pitched his arm off to watch his bullpen give up a one-run lead in the 7th. The righty twirled 6 1/3 innings and shut the Dodgers down on seven strikeouts, giving up just one run on three hits.

This is the first game in #WorldSeries history in which neither starting pitcher allowed more than four base runners.

Alex Bregman flashed his leather at the hot corner on a deja-vu inducing play that kept the Dodgers from skipping past home plate in the 6th. Chris Taylor chopped a one-hopper to third and Bregman perfectly trapped the ball in the webbings of his glove before firing a throw home. The hustling Enrique Hernandez never stood a chance. Bregman pulled a similar stunt against the Yankees in Game 7 of the ALCS as Greg Bird attempted to score.

As pivotal as that play was, Bregman didn’t stop there. Justin Turner cranked a liner at the third baseman in the 7th and Bregman knocked it down with his glove. Bregman turned, located the ball and trusted his arm to do the rest for yet another jaw dropping out to add on an impressive defensive resume. The 23-year-old slammed a solo shot in the 9th — proving he’s just warming up.

Now, the Dodgers look to dignitary Clayton Kershaw in hopes of a series lead in Game 5.

Bellinger and the squad play better with their ace on the mound. That’s why he’s set on leaving it all on the field when he said, “[Kershaw’s] gonna give 110 percent and we’re gonna try to back him up and give him 110 as well.”