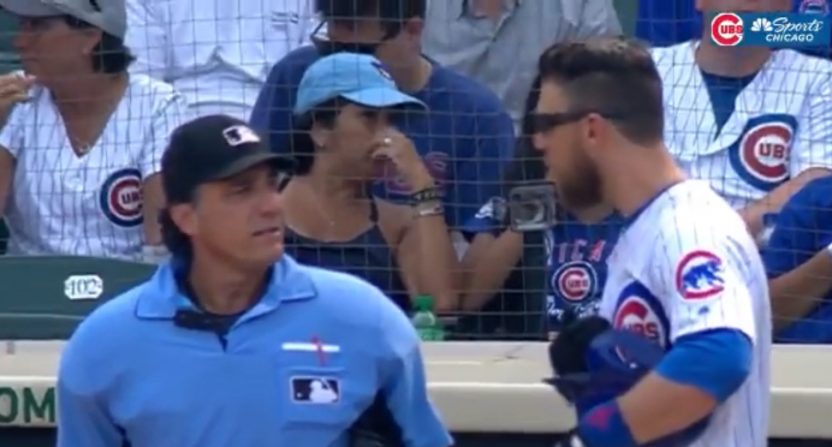 Some MLB players and managers pick up ejections frequently, but some definitely don’t. Chicago Cubs’ super utility player Ben Zobrist is definitely in that latter category; heading into Tuesday’s game against the Milwaukee Brewers, he’d not only never been ejected in his 16-year MLB career, but had never been ejected at any level of professional baseball. That changed Tuesday, though, and according to Zobrist, it’s because he told home plate umpire Phil Cuzzi calls like the called third strike on him are why MLB players “want an electronic strike zone.” Zobrist wasn’t ejected after the play in question, but rather when he made that argument to Cuzzi before his next at-bat.Z Here’s video of the ejection and the fallout (which also led to Cubs’ manager Joe Maddon getting ejected):

The 37-year-old #Cubs veteran made the most of his first career ejection: https://t.co/89iB203CbY pic.twitter.com/nh9xLPpiVE

Zobrist says in the post-game interview in there “I was told basically ‘Be quiet,’ and I was threatened that I was going to get kicked out of the game, so I just walked away. So I just felt like before my last at-bat, I was going to let him know calmly what I thought. So we had a discussion, and it didn’t go that great, and he kicked me out of the game. I just basically said ‘That’s why we want an electronic strike zone,’ and that’s obviously what got me tossed. It is what it is; I’m not going to lie, I think that when you’re dealing with that and you’re trying to have good quality at-bats and you feel like it gets taken away from you, then sometimes your pride gets in the way and you say things that are going to upset them. And obviously that upset him and he tossed me. But they’re human beings, you know, and that’s the point; they get upset, we get upset, they don’t want to hear us say certain things, and we don’t want to feel like they don’t care. And I feel like he cares, all the umpires care, but sometimes it’s frustrating…I felt like I knew the zone right there and I felt like that was taken away from me.”

MLB.com’s Adam Calvy shared the pitch map of the called strike in question, which (along with the previous pitch, also called a strike) does appear to have come in outside:

The debate over human umpires versus electronic balls and strikes isn’t going to end any time soon, but it’s understandable why Zobrist got upset about the calls here. But it’s also understandable why Cuzzi tossed him for this comment. We’ll see if there’s more movement towards electronic ball and strike systems down the road, or if more players will continue to get thrown out for arguing with questionable calls by umpires.