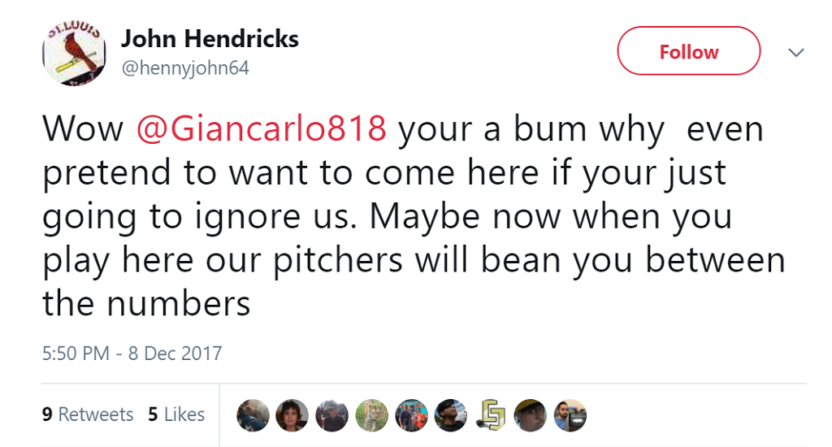 Over the years, the St. Louis Cardinals fanbase has worn the pejorative label of “Best Fans”, a label wielded now as a pejorative to describe the inherent hypocrisy of describing any team’s fans as “the best” despite every team’s fans containing a deep well of awful people.

For example, after he signed but before he’d suited up for the Cardinals, Dexter Fowler spoke out against Donald Trump’s controversial immigration orders with regards to how they would impact Fowler’s family. Some Cardinals fans immediately lashed out online. This very site wrote about it, because it was a story; a team’s fans attacking their own player over this sort of statement? That’s a story regardless of franchise, though it gets an extra boost because the baseball Internet is tired of the narrative of Cardinals fans.

Of course, also tired of that narrative, but for different reasons: some other Cardinals fans, who often complain about the Internet piling on.

This brings us to today’s news, when Giancarlo Stanton exercised his no-trade clause to reject trades to both the Giants and the Cardinals.

The Cardinals responded with this statement. See if you can spot any difference:

The #STLCards today issued the following statement regarding the pursuit of Giancarlo Stanton. pic.twitter.com/rZekmW2sOf

“We had an agreement to acquire Giancarlo Stanton from the Miami Marlins, subject to him waiving his no-trade cluase. We have been notified that he will not waive his no-trade clause to come to St. Louis. While we are disappointed in his decision, we will continue to make every effort ot improve our club for the upcoming season,” said DeWitt.

“Unfortnately we were not able to coninvce Stanton to waive his no-trade clause and join the Cardinals. We felt this was a great landing spot for him, but it was not meant to be,” said Mozeliak.

Spot any tonal disparity there?

The Stanton news was greeted by some St. Louis fans in predictable fashion, as compiled by the @BestFansStLouis Twitter account:

Wow @Giancarlo818 your a bum why even pretend to want to come here if your just going to ignore us. Maybe now when you play here our pitchers will bean you between the numbers

Oh well, move on. I’d rather have somebody that understood the privilege it would be to play in St. Louis. Keep working to find the next piece.

Anyone who would turn down the privilege to play with the Cardinals, good riddance! I know he’s great, but I’m SO glad we didn’t get him. Throw him a change up!

@Giancarlo818 nice to know you are “entitled” and want a championship given to you. Have fun being an entitled littler girl

I appreciate the #Cardinals going all out on this. A guy who signs a 13-year contract with the *Miami Marlins* can’t fairly be expected to know much about winning. Or history. Or baseball. Let’s go make it a spectacular offseason. #STLCards https://t.co/fRgCXXwopd

Of course, it’s not just the fans, it’s the media:

The Cardinals have drawn 3 million fans 19 of the last 20 seasons and been to the postseason 12 times. No better baseball city on this planet. No better organization.

I'll give Stanton a pass for not picking STL – that's just personal preference – But if he just refuses to pick either STL or SF, effectively throwing himself into a kicking and screaming, "I DONT WANNA!" hissy fit…then I'll call him a pansy and a spoiled child.

Kevin was totally kidding, though, guys:

I was kidding…mostly. Calling someone a pansy is, in general, ridiculous anyway.

But…I would argue the whole point of playing baseball is so that one can make a lot of money AND win.

I’m still laughing about this:

That's right. He can "go" – sitting and squatting in a situation like this is petulant and ridiculous. Take your money, get out, and go win somewhere. https://t.co/f74dpTO6Sj

As though Giancarlo Stanton wanting to stay in Miami (which he clearly wanted until now, too, hence the 13-year contract) is some kind of character flaw, and not, you know, the actions of an adult person looking to manage his own life, career, and happiness to the best of his abilities.

Again, though it’s not important to note because it’s common sense and only people predisposed to victimhood would feel the need to point it out, but not all Cardinals fans act like this, and other teams have fans that also tweet athletes with reprehensible things. But not every team attempts to cultivate an aura of Rockwellian Midwestern values, so there’s not a readymade well of hypocrisy for people to exploit.

That’s what makes it funny, and that’s why people care.

If you’re a Cardinals fan who can’t understand why other people might take extra pleasure in this exact scenario, despite years of documented examples of this exact behavior, along with the whole “top executive convicted for hacking into another team’s computer systems”, you can rest assured that it’s probably just everyone being jealous of you.

Definitely no other reason.

This was good though:

With @mikematheny22 as the manager, I wouldn't wave my no trade clause either!!! Until we get a manager that has a clue!!!!! @Cardinals will struggle getting great free agents!!!