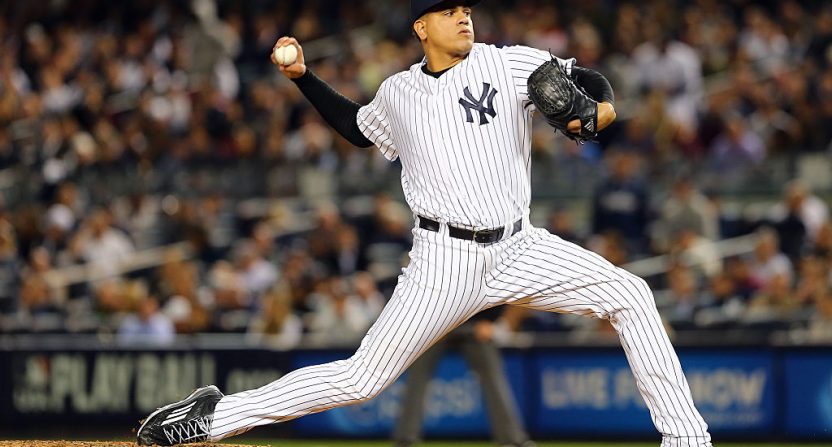 You might remember the fun story from this past offseason when the Yankees went to arbitration with relief ace Dellin Betances.

Betances had been one of the best relievers in baseball for three straight seasons, and was coming off a 2016 wherein he posted an absurd strikeout rate of 15.53 batters per nine innings. But he hadn’t been New York’s closer; rather, Joe Girardi had used him as a setup man, in various high-leverage spots. Essentially, the kind of reliever usage most stathead-types always hope for the best relievers.  In 2016 specifically, it happened because the Yankees had Betances, Andrew Miller, and Aroldis Chapman at the back of the bullpen.

Cleveland’s Terry Francona used Andrew Miller similarly once the Yankees dealt Miller at the deadline, and Joe Maddon attempted to use Chapman similarly for some of the Cubs postseason run as well.

Betances, though, was not yet a free agent, and was indeed due for an arbitration contract this past offseason. Betances asked for $5 million, while the Yankees countered with $3 million; rather than meet in the middle or at their player’s number, the Yankees went all the way to a hearing. Arbitration hearings leave no wiggle room; there’s no compromise at that point, and the arbitrator is given a list of criteria on which to judge the player’s worthiness of a certain number.

That criteria is heavily slanted towards traditional stats, however, and as Betances didn’t have any saves, he was always at a disadvantage. But Yankees president Randy Levine piled on Betances, going far beyond normal criticism of the team’s own player, as though asking for $5 million was an absurdity:

Randy Levine said that Dellin Betances' $5 million request might as well have been $50 million. "He doesn't have the stats."

Essentially, Betances wasn’t closer material, and therefore he shouldn’t be treated as such in an arbitration setting:

“$5 million goes to elite closers,” Levine said. “Pitchers who pitch the ninth inning and have a lot of saves. Dellin didn’t have that record. He never did.”

It actually got worse, somehow:

“It’s like me saying, I’m not the president of the Yankees, I’m an astronaut,” Levine added. “I’m not an astronaut and Dellin Betances is not a closer.”

That’s frustratingly transparent. Now, though, Levine’s cartoonish criticisms are coming back to haunt him, as Aroldis Chapman’s DL stint means the first-place Yankees are now turning the closer role over to Dellin Betances. Seeing as how Levine made those comments less than three months ago, you can imagine the sticky spot he’s in, and the tortured logic Levine is now forced to attempt:

“He’s going to do great,” said Levine. “He’s ready. I have full confidence he’ll do a great job.”

“That was arbitration, based on the past. But he’s ready to do it now.”

The arbitration process is flawed in many ways, including that it forces teams and players to be a bit more adversarial than is probably healthy for either side. It’s also not flexible enough to account for things like changing relief roles, or emphasis on newer stats; a team might be happier if a power hitter walks more and cuts down on strikeouts at the expense of homers, but that’s going to hurt him in arbitration, meaning management gets to have their cake and eat it too.

But what Levine did was well beyond the bounds of appropriate conduct, especially given that he went to the media with his words. He brought his inevitable hypocrisy upon himself, and hopefully Betances pitches well in his new role and points to these quotes from Levine the next time the two sides go to arbitration.

Which could be both of the next two winters.