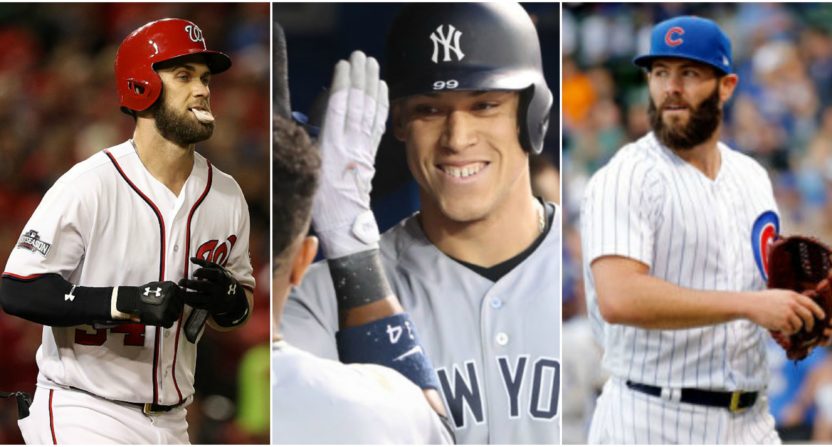 With the All-Star break behind us, it’s time to look ahead to the second half of the season. And with more than two thirds of teams still clinging to playoff hopes and a busy trade deadline surely ahead of us, there will be plenty to keep an eye on.

Here’s what our staff will be watching most closely.

Alex Putterman: The most compelling storyline in baseball right now is the NL Central. If the plucky Brewers and powerhouse Cubs were tied right now, I’d assume the Cubs were bound to run away with the division. But somehow Milwaukee actually leads the Central by a substantial 5.5 games. The Cubs, everyone’s preseason World Series favorite, are 43-45. Even if they win 60 percent of their games the rest of the way, they’ll finish with only 87 wins. Will that be enough to hold off the Brewers, who are shockingly ahead of schedule on their rebuild? The Cubs added starting pitcher Jose Quintana on Thursday, bolstering their biggest weakness, but this division could come down to the wire—an outcome no one saw coming before the season.

Matt Clapp: I’ll be watching Aaron Judge and if he can sustain the success he had in the first half. I’m not saying he’ll match the 5.5 fWAR or keep having a 1.139 OPS; those numbers are just insane.

Judge only has 461 MLB plate appearances under his belt, and the league usually adjusts, finds hitters’ holes. But with just how dominant he was in the first half, along with his ability to hit the ball to all fields (as we even saw in the Home Run Derby), there’s reason to believe he’s for real. We just need to see it a little longer to confidently say he’s one of the best players in the game.

Ian Casselberry: I’ll be curious about the Houston Astros. They have the largest first-place division lead and are also way out in front for home-field advantage in the AL playoffs. But we’re still talking about a young team. How will the Astros respond in the second half if they’re not really being challenged? Will they become complacent while waiting for the postseason? Or will they stay aggressive and keep crushing the competition? I’m also intrigued by how the front office reacts. Will they look at the huge lead and think, “OK, we’re good”? Or will they try to address any flaw that could possibly hurt them in the postseason? Furthermore, making a big addition could strengthen the team’s resolve and keep them focused through August and September.

Joe Lucia:  It’s weird to say this about a team that is 16 games above .500, but I think I’m most curious about what happens with the Washington Nationals. They’ve scuffled along at a .500 pace over the last month, and their once-formidable 12.5 game lead was worked all the way down to 7.5 at the beginning of July (before creeping back up to 9.5 at the All-Star Break). The team has a much tougher schedule in the second half (as do the Braves, their primary competitor in the NL East), and with one major weakness (that awful bullpen) and injury concerns beginning to mount, I would be lying if I said I’m confident about them cruising into the postseason.