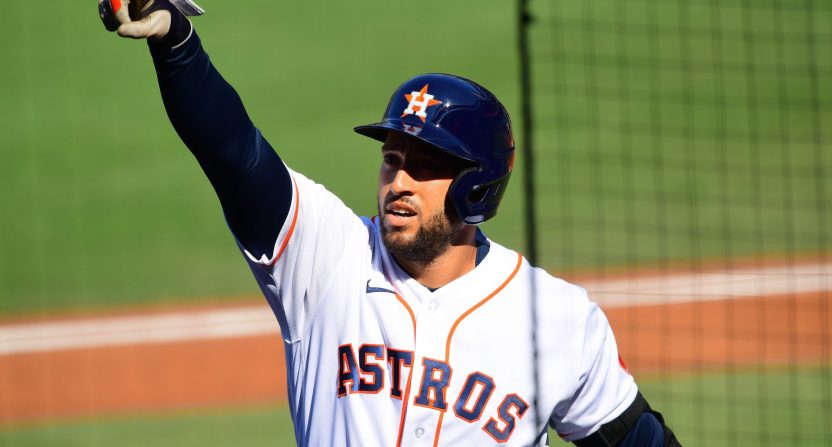 The Toronto Blue Jays have added a big-time bat to their offense. Brendon Kuhn of Blue Jays Nation and Joey Vendetta of SportsNet were the first to report that the Blue Jays and free-agent outfielder George Springer have agreed to a deal, pending a physical.

That was later followed by confirmation from ESPN’s Jeff Passan and MLB Network’s Jon Heyman. It’s reportedly a six-year, $150 million contract for the three-time All-Star and 2017 World Series MVP.

Outfielder George Springer and the Toronto Blue Jays are in agreement on a deal, sources familiar with the situation tell ESPN.

Springer is headed to Dunedin for a physical. And if all goes according to plan, Toronto will get the star it’s been looking for all winter.

Springer and Jays agree at $150M for 6 years

It’s the largest signing in Blue Jays history, and by *a lot* when it comes to signing free-agents.

This comes on the same day that the Blue Jays signed free-agent closer Kirby Yates. The right-hander had bone chips removed from his elbow in August, but was arguably the best reliever in baseball in 2019 (if not new Chicago White Sox closer Liam Hendriks).

Kirby Yates in 2019 – 1.19 ERA in 60.2 IP. Struck out 42% of the batters he faced (a ton) with nearly eight strikeouts for every walk (exceptional ratio). Had bone chips removed from elbow in August, but if he's returning to health this could really pay off for #BlueJays https://t.co/RmDUiOP9Du

Additionally, Ken Rosenthal of The Athletic and Fox Sports reports that the Blue Jays are still trying to sign free-agent outfielder Michael Brantley (owner of a .300/.364/.476 slash line in 2020), who’s close friends with Springer (they were teammates the past two seasons with the Houston Astros).

So, the Blue Jays are really going for it, after putting together a 32-28 record with an up-and-coming squad in 2020.

Now, it’s always scary signing players over 30 years old to contracts like this, and Springer turned 31 in September. Additionally, a big part of his value over the years has been being able to provide above-average defense in center field, a premium position. He was worth six defensive runs saved as a center fielder in 2020 (and 7 DRS in 2019), so odds are he’s still at least solid out there for the short-term, but there’s a good chance he’s a corner outfielder for at least a few years of this contract. And if that ends up being the case, he’ll really need to maintain his career offensive performance into his mid-30s to provide the value expected on a contract like this.

Still, even if this deal were to end up looking like an overpay in the end, it’s the exact kind of move Toronto should be making in their position- and especially if they want to compete with the New York Yankees in the AL East.

Toronto has a very exciting young roster, headlined — at least until today — by potential future stars in Vladimir Guerrero Jr., Bo Bichette, and Cavan Biggio. It’s also easier to deal with the ups and downs of young players by complementing them with proven veterans, like Springer (and Yates, and potentially Brantley). There’s also the clubhouse presence and postseason experience side of things that we can’t quantify, but definitely can make a meaningful  difference for a team in the Blue Jays’ position. These moves also catch the eyes of other players around the league which can mean something down the road (and especially with so many organizations hardly trying these days), and will invigorate the Toronto fan base.

So, good for the Blue Jays for going for it, and there’s great reason for fans to be excited about what the organization is building. It remains to be seen if the Blue Jays will be title contenders in 2021, but they’re getting close. And at the very least, they will immediately be a lot of fun to watch.