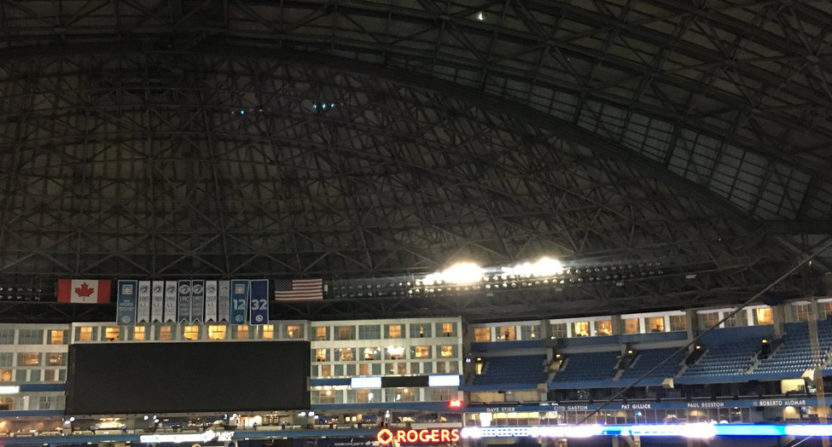 There’s been an incredible wave of postponements thanks to weather across Major League Baseball this year, with 22 through Sunday (the second-most MLB has had through April since 2000, with the month only half-over), and so the San Diego Padres decided to show off their good weather Sunday and declare that their game would be on.

Attention: Due to weather, today’s game will be…

The Jays’ account then tried to follow suit Monday thanks to the Rogers Centre’s roof, but then had to delete that tweet after their own game came into question thanks to falling snow and ice from that roof and from the neighbo(u)ring CN Tower.

Well this is awkward.

Here’s a look at some snow and ice falling from the Rogers Center roof, which would be a concern for anyone trying to enter the building:

All afternoon the wind has been blowing heavy snow and ice off the roof of the @RogersCentre and it comes crashing down loudly. No warning signs and we’ve been nervous every time someone walks underneath. (Listen with sound on.) #onstorm pic.twitter.com/yp1YYfV43O

The ice falling from the CN Tower is no joke, either, as its 1,815-foot height means that can do a lot of damage:

And that ice appears to have poked a hole in the Rogers Centre roof:

Hole in dome roof above RF from ice falling from CN Tower. Squeegees may be needed. #BlueJays pic.twitter.com/PvDnNn3Bd4

Scene at the Rogers Centre ahead of maybe #BlueJays game. Hole in roof above right field. Tarps underneath. Also some tarps in left side of infield. Presumably for more leaks pic.twitter.com/CkGdbNuhYA

That hole, and some of the other damage caused by falling CN Tower ice, can be seen in this Global News video:

The hole led to the tarp being brought out there in right field. And it’s not just a question about the field conditions, but about safety for people trying to get to the game; the CN Tower itself has been closed and the area around it cordoned of. And, as TSN’s Scott Mitchell relayed, the nearby sidewalks around the Rogers Centre also look terrible, and carry “falling ice” warnings:

Area around Rogers Centre is a bit messy. #BlueJays pic.twitter.com/3Jben5gZV6

And that roof will have to be repaired, and workers need safe access to it.

This marked the first time the CN Tower has been closed to the public since the northeast blackout in August 2003. And it may mark yet another weather-related hurdle for the Jays, who had games in Cleveland rained out both Saturday and Sunday. The Royals also had their home game Sunday against the Angels postponed thanks to weather, and they have the rare distinction of being the Jays’ opponent the last time a home game was cancelled thanks to roof issues:

Last time a game was cancelled was April 12, 2001, when panels collided when the roof was opening.
The opponent? Kansas City Royals.#BlueJays

But this goes to show that even a roof isn’t always proof against the weather (as the Jays’ fellow Toronto sports team could tell them; the Raptors’ playoff game Saturday was delayed thanks to a leaking roof at the nearby Air Canada Centre). And that tweeting about how great your conditions are can be a recipe for some future problems.

Sure enough, the game was canceled later in the afternoon.

Tonight’s game has been cancelled due to inclement weather causing damage to our roof. We apologize to our fans for this inconvenience. Further info for those with purchased tickets to the game will be shared shortly. Tomorrow’s game will be a 3:07 p.m. traditional doubleheader