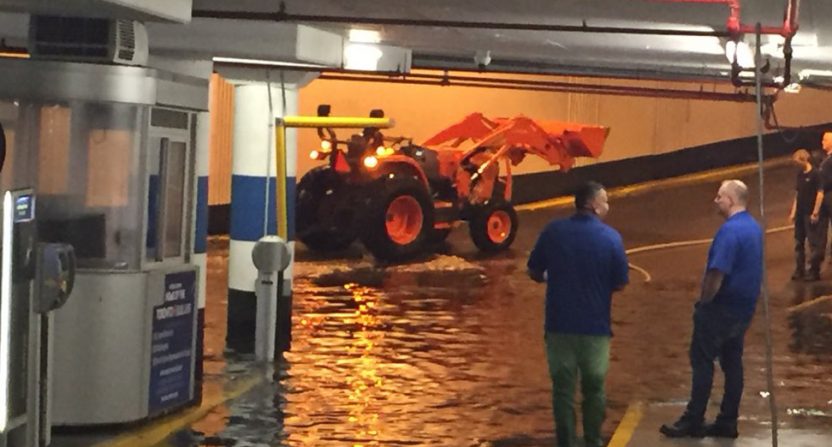 Much of the southern portion of Ontario was hit by a massive storm Tuesday night, and that was part of the many things that went wrong for the Toronto Blue Jays and their fans at the Rogers Centre. Their game against the Boston Red Sox turned into a 10-7 loss in 10 innings, and included starting pitcher Marcus Stroman doing well until a blister on his pitching hand broke, the roof leaking, the lights briefly going out, newly-acquired closer Ken Giles allowing two home runs (including a three-run shot from Mitch Moreland) and five home runs in the 10th, and then media members and others being unable to leave the parking garage promptly after it flooded. That’s a whole lot. First, let’s start with the roof leaks and the power outage:

There's a leak in the Rogers Centre roof. Water pouring into the seats along right field line in 500 level #BlueJays

Not the best video but you can see a bit of rain is squeaking through the @RogersCentre roof. #BlueJays pic.twitter.com/PjPQkRqeaU

Well that awkward moment the #RedSox made it rain inside the Rogers Center. #RedSox #BlueJays

It's raining in the Rogers Center… It's a god dam Dome…🤦‍♂️

Lights out + Leaks at the Rogers Centre. This place could use a renovation. #BlueJays pic.twitter.com/8Q1Uc5eMxu

The roof was open to begin the game, but was closed partway through; that still wasn’t enough to stop the water, though. (But hey, this went better than when the Jays tweeted about the greatness of their roof in April and then had a game cancelled thanks to falling ice and a hole in the roof.) And while that was going on, the Jays were having some on-field struggles. Starting pitcher Marcus Stroman held the Red Sox to two hits through seven innings, but left after that thanks to a blister on his pitching hand. Toronto led 3-1 at that point, but reliever Ryan Tepera gave up three hits and a walk, including a three-run blast from J.D. Martinez that made it 5-3. However, Luke Maile hit a RBI double for the Jays in the eighth, and Justin Smoak’s solo homer in the ninth sent it to extra innings. And that led to Giles (acquired in the Roberto Osuna trade) giving up two home runs and five runs in the top of the 10th, including Moreland’s three-run bomb.

Mitch Moreland hits a 3-run blast to put the Red Sox back on top in the 10th inning!#MLB #AGS pic.twitter.com/vp1UlpdTuO

And the pain for some Jays’ fans and some media covering the game didn’t end afterwards. Water flooded the stadium’s parking garage, leading to big delays getting out:

Shoulda stayed on the air to #Bluejays Talk it up a little longer. Here’s the scene at the exit of #RogersCentre parking lot. pic.twitter.com/RYV5p4E8R2

They started letting cars get out about an hour and a half after the game, once the water level had gone down a bit. By and large, everyone was good natured about it.

They’re using a tractor from the Rogers Centre grounds crew and literally scooping the water out. A nice man just came around handing out jumbo freezies to the restless but understanding crowd. pic.twitter.com/aIwieUvV4i

That’s quite the night. And it should be noted that this storm hit much of Toronto, and produced a whole lot of even more calamitous occurrences, including police rescuing two men out of a flooded elevator with only a foot of air space left. So issues at the Rogers Center weren’t the biggest problem in the city. But still, there was a whole lot that went wrong for Jays’ fans and media covering the team Tuesday.