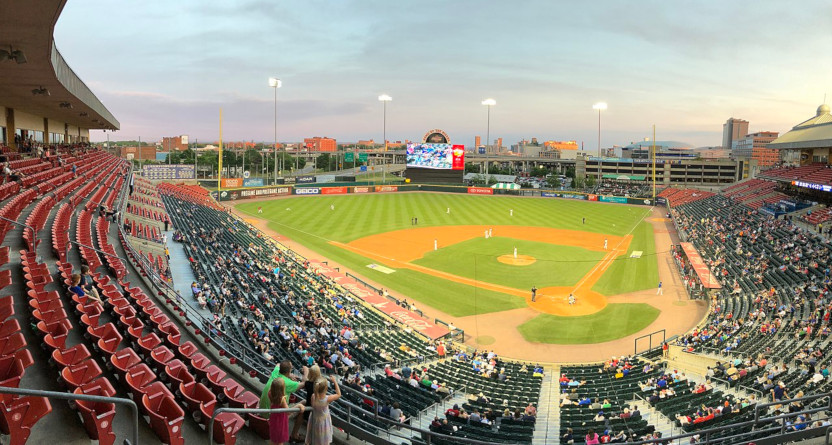 The Toronto Blue Jays have had a whole lot of drama about where they’ll play home games this year, from initial rumors of Buffalo to plans to play in Toronto as normal to Toronto being shot down and options explored with Buffalo, Dunedin, Pittsburgh, Baltimore, and even a pure road warrior team. After all that, though, the migratory Jays have settled on Buffalo’s Sahlen Field, (seen above in a July 2018 photo from Wikipedia of a triple-A Buffalo Bisons game there) at least for “a majority” of their games. Here’s the team’s statement:

Why didn’t the Jays just go with this plan at the start? Well, while Sahlen Field is the home of their triple-A affiliate, the Bisons, there are big differences between an AAA ballpark and a major-league one. Players have expressed concerns about injury treatment facilities and clubhouse space. And there are also issues with the park lighting not being up to MLB’s standards.

MLB also prefers to have its teams play in MLB venues, which was a big part of why Pittsburgh and Baltimore were so heavily explored before local health authorities raised objections to having yet more MLB players and support staff travelling there frequently. (And other MLB stadiums may still be used; it’s notable that this release only includes “a majority” of the Jays’ home games, not all of them, and it’s worth mentioning that ESPN’s Marly Rivera reported that Baltimore’s Camden Yards was offered beginning in September, so maybe some later-season games wind up there.) But with those options not panning out, Buffalo must have been seen as the best remaining option. (And this is a funny reversal from the times the Bills played games in Toronto.)

The Blue Jays’ first game of the 2020 season is Friday night on the road against the Tampa Bay Rays. They then have further games in Tampa Saturday and Sunday, and then continue their road trip against the Washington Nationals Monday and Tuesday. Their first scheduled “home” game is next Wednesday, also against the Nationals, but it now looks like those games (Wednesday and Thursday) will be played in DC as well. As per Mike Harrington of The Buffalo News, the Jays’ first Buffalo game could be July 31, or it could be later still:

The Jays could be playing here as soon as next Friday night against the Philadelphia Phillies, although a more likely scenario is a Buffalo home opener on Aug. 11 against Miami.

So we’ll see when that first Buffalo game actually takes place. But the stage is now set for the Jays to play there.