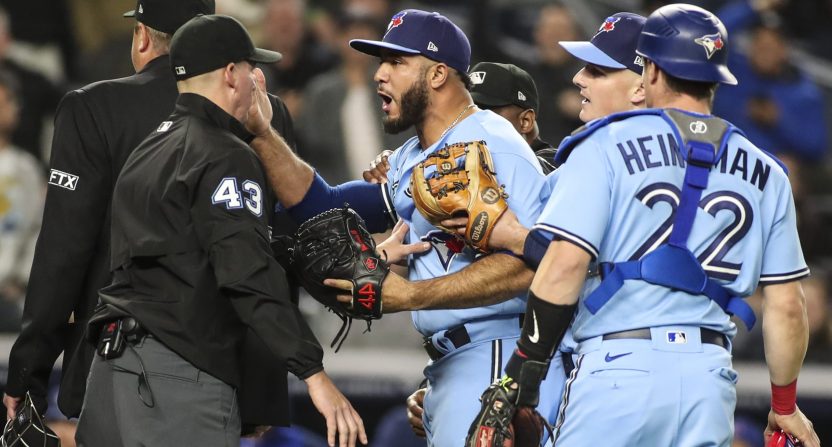 Things changed quickly for the Toronto Blue Jays in their game against the New York Yankees on Tuesday. They led 3-0 in the sixth inning. But over the next two batters, they lost their lead and one of their relievers.

Toronto starter Yusei Kikuchi pitched five shutout innings. But in the sixth inning, he allowed two runners to reach. Kikuchi did retire Anthony Rizzo but was promptly relieved for Yimi Garcia, who was brought on to face Yankees slugger Giancarlo Stanton. Stanton sent a 2-2 pitch the other way and while it wasn’t a classic Stanton moonshot, it was hit well enough to get over the right field wall, tying the game at 3-3.

Then, things got interesting.

The next hitter was Josh Donaldson. After starting 0-1, Garcia’s next pitch sailed inside and drilled Donaldson. The benches did not clear and aside from some chatter from the Yankees, nothing materialized.

Still, the umpires conferenced together, eventually deciding that Garcia should be ejected.

.@BlueJays' Yimi Garcia has been ejected for hitting Josh Donaldson after the @Yankees tied the game 3-3.

Thoughts on the call? 🤔 pic.twitter.com/kXCTX8eUHv

The reaction here was mixed. Garcia would hardly be the first pitcher in baseball history to throw at a hitter immediately after giving up a big home run.

Several fans noted that in support of the ejection.

Yimi Garcia is a clown lol

Yimi Garcia should be ashamed of himself. To hit the next guy after giving up a homer is inexcusable.

I mean yimi garcia shouldn't be too mad. Idk if it was intentional or not. But any fastball up and in after giving up a homer looks bad. Umps kind of had no choice. #Yankees #bluejays

But that didn’t seem to be the dominant sentiment. The more pressing feeling in the MLB world was that the umpires overreacted.

What an ump show, throwing out Yimi Garcia is a trash move. A tie game in the 6th. That’s a terrible decision.

A bit confused. Umpires tossed Yimi Garcia after he hit Josh Donaldson with a pitch in the 6th inning of a tied game. Quick toss. Blue Jays players/coaches understandably going nuts for a while.

They just tossed Yimi Garcia for plunking Donaldson in a tie game. Second pitch of the AB. 0-1 count.

MLB has blown it with the actual slippery baseballs and to think there's intent in this spot, in a 3-3 game, is beyond absurd.

I'd love to know what the hell the umpires are thinking by tossing Yimi Garcia in a situation that NO pitcher would ever intentionally hit a batter.

It's a tie game! Blue Jays are contenders! Why would Garcia try to lose a game!?

Yimi Garcia getting ejected with no warning after a two-minute umpire conference just because he happened to lose control of a two-seamer at a bad time is absolute peak Ump Show material, my goodness

It’s hard to figure out intent without being in Garcia’s head or at least talking to him. While we wouldn’t call Garcia a classic control pitcher, he’s not a wildman, either. Furthermore, he rarely hits opposing batters. Knowing that, it does lend credence to the idea that immediately after coughing up a home run, he got frustrated and drilled the next hitter on purpose.

But there are two notable counterpoints to that.

One, that would normally happen on the first pitch. The beanball came on the second pitch here. And it wasn’t as though the first pitch brushed Donaldson back. It was a called strike.

Two, the game situation is not a normal HBP scenario. Normally, if you’re going to put a batter on base for free, it’s going to be when the game’s outcome is no longer in doubt. That is certainly not applicable in the sixth inning of a tie game.

Garcia coughing up a big home run and drilling the next batter does provide bad optics. That’s not deniable. And while there was no warning, none is necessary. If an umpire feels a beanball was intentional, he can eject the pitcher, regardless of whether a warning had previously been issued.

Frankly, the ejection would have been easier to defend if home plate umpire Lance Barrett had done it immediately. All of the aforementioned points would have still been valid but an in a split second, Barrett may not be thinking about all of that.

But once the umpires conference, that excuse is no longer valid. At that point, Barrett has not only taken time to not make a gut reaction but has sought the opinions of three other people. In that conversation, the entire Donaldson at-bat and the game situation should have been discussed. And with that, bad optics aside, Garcia should not have been tossed.