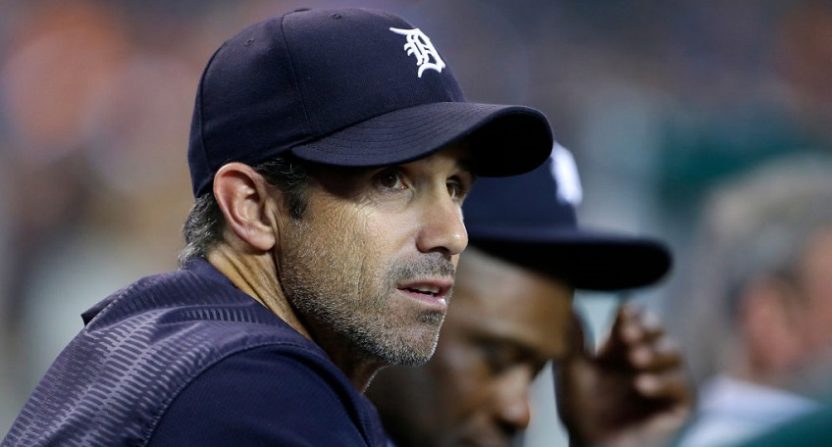 The Detroit Tigers showed some mercy to Brad Ausmus and their fans Friday afternoon, announcing that the manager would not return next season.

With nine games remaining on the schedule at that point, the only pertinent question surrounding the Tigers was whether or not Ausmus would be back. And with six of those nine games against a Minnesota Twins club that needs every win it can get to maintain its hold on the American League’s second wild-card spot, this final stretch was likely to be brutal for Detroit.

The noise around Ausmus and his job status was already booming. But with each subsequent loss, the sound would only have gotten louder, the questions more frequent and persistent. The Tigers were already having an awful September, compiling a 4-17 record going into Friday’s play. They’d lost 11 of their past 13 games and face a potential 13-game losing streak to close out the 2017 season. Any chance at competitiveness was sent out of town, with outfielders J.D. Martinez and Justin Upton, reliever Justin Wilson and ace starting pitcher Justin Verlander dealt away.

Why delay the inevitable? The timing of the announcement was strange. Detroit still had 10 games left to play. Why not wait until Oct. 1 or 2, after this terrible season had mercifully ended? Did the Tigers want to get a head start on letting potential managers know that they had an opening? They can’t interview anyone on a MLB coaching staff until the season ends. And if the front office has eyes on someone with a playoff team, those conversations couldn’t take place until the postseason ends.

But firing Ausmus outright at this point made little sense either. What good would it do to have coaches Gene Lamont or Lloyd McClendon manage the team through the rest of the season. With so little time left in the season, why not just let Ausmus finish out the string even if it was all but certain that his days in the Tigers dugout were done? It’s the equivalent of working out a two-week notice.

Still, the Tigers couldn’t help but make the situation just a bit awkward on Friday. The team let local media know that an announcement was going to be made at Comerica Park, leading to immediate speculation that a decision had been made on Ausmus. Yet the strange timing compelled some to speculate that the Tigers might announce something else instead, like a special event coming to the ballpark or a PR-friendly notice, like extending the netting down the foul lines to protect fans. Maybe Victor Martinez would announce he was retiring.

The Tigers were set to pose for their annual team photo Friday afternoon. Would they really tell Ausmus that he wasn’t coming back and then have him pose with team executives and players? As it turns out, that’s exactly what happened. Everything was copacetic at the CoPa.

At least this way, Ausmus no longer had to face questions about his job. Maybe fans would lay off a bit at Comerica Park, along with social media and sports talk radio. (Although there will likely be a lengthy post-mortem.) Why gripe about the manager anymore when he’s not going to be around? The decision has already been made. Direct that angst at the search for a new manager, and wonder whether or not general manager Al Avila and owner Chris Ilitch can pick the right guy for a team that will rebuilding for the next three years, if not more. (Personally, I like Mike Redmond after Jon Morosi mentioned him.)

The bitter irony is that Brad Ausmus seems like he’d be a good candidate to manage a rebuilding Tigers team if he wasn’t already carrying the baggage from his four seasons in Detroit. When Ausmus was hired before the 2014 season, he appeared to be a smart choice by then-team president and general manager Dave Dombrowski. He was the opposite of the gruff, grizzled, old-school veteran Jim Leyland.

Media and fans were enamored with a younger manager and former player. Coming from the San Diego Padres front office, the presumption was that Ausmus would be a new-style skipper who would incorporate advanced metrics into his lineup construction, defensive alignments and strategy. And catchers usually make the best managers, right?

Unfortunately, a Tigers club that was still an American League contender and had World Series aspirations probably should have gone with an experienced hand in the dugout, rather than someone who would learn on the job. He had respect from the Tigers’ veterans, likely due to not being far removed from his playing days. Ausmus would often defer to those older players and their clubhouse leadership, even when they weren’t playing well. To his credit, he did communicate well, something other MLB managers struggle with. As a result, players rarely complained about the manager or had disputes with him. They even defended him against fans and media.

But Ausmus never seemed to have the right feel for the game, especially when it came to managing his pitching staff. Handling a bullpen, having a sense of when to pull a starter and bring in a reliever, determining the right matchups between pitcher and batter late in ballgames, and being flexible enough to use a closer when most needed — not just in a save situation — is what distinguishes good managers from bad ones. Maybe it’s even what separates great skippers from the good ones.

Where was the guy who was supposed to be innovative? OK, Ausmus would employ some defensive shifts, but virtually every manager in baseball was doing that. Ausmus was surprisingly, disappointingly conventional when it came to his decision-making. Closers pitched in the ninth inning because that’s when they were supposed to be used. Seventh- and eighth-inning setup relievers were kept strictly in those roles, even when the circumstances of the game dictated that they should be used earlier in high-leverage situations. Ausmus only made those decisions seem even worse when he couldn’t explain them very well to reporters afterwards, making it clear that he was sticking to conventional wisdom rather than responding to the needs of the game.

If Ausmus gets another managerial job — and he probably will after either taking some time away working with a front office, coaching staff or maybe even TV — it’s entirely possible that he’ll do better the next time around. He can take what he’s experienced and apply it to the next job, maybe with the perspective of someone who’s learned from his mistakes. Sometimes, it’s hard to make changes on the fly. You’re too concerned with what needs to be done that day. Getting some distance can add some clarity. Terry Francona, Clint Hurdle, Joe Girardi and Terry Collins are among the managers who found more success in their next jobs.

But Ausmus wasn’t going to turn around his perception in Detroit, especially with a rebuilding project that’s going to lose a lot of games in the near future. (And frankly, Avila should have begun the rebuild after last season, rather than try to take one more futile shot at a World Series stocked with talented, but aging veterans.) The impression was already set with his losing record (312-326) and only one division title (with no postseason wins) for a team that was expected to do much more. The hopes that Ausmus would be a new-age manager was likely misguided to begin with. It was an assumption. That was clearly wrong and it’s long past time for the Tigers to move on and spare everyone involved further pain.