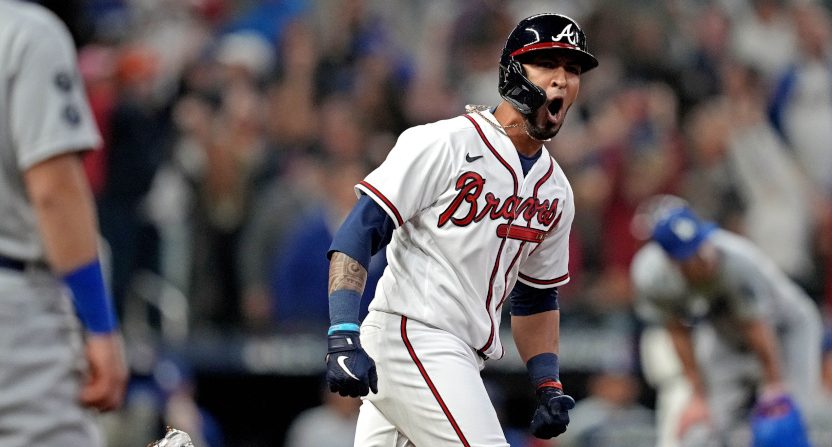 The Atlanta Braves are heading to their first World Series since 1999. They got there with a 4-2 home win against the Los Angeles Dodgers in Game 6 of the National League Championship Series Saturday night, giving them a 4-2 series victory. And the key offensive part of that win came in the bottom of the fourth, where Dodgers’ starter Walker Buehler walked eighth batter Travis D’Arnaud with two outs, where Braves’ manager Brian Snitker then pulled starting pitcher Ian Anderson for pinch-hitter Ehire Adanza, where Adanza doubled, and where leadoff hitter Eddie Rosario then hit this three-run home run to right (which he’s seen celebrating at the top):

Eddie Rosario has tied the record for most hits (14) in a single #postseason series.

As noted there, that added to Rosario’s incredible performance in this series. Combined with his first-inning single, that gave him 14 hits in the series. (And he almost launched another home run in the eighth, but it died at the warning track in center and was caught by Cody Bellinger.)  But he wasn’t the only Atlanta player who came through in a huge way Saturday; other key showings there came from relievers A.J. Minter, Tyler Matzek and Will Smith.

Minter came in to pitch beginning with the top of the fifth, replacing Anderson (following Adanza subbing for Anderson at the plate), and he threw two one-two-three innings. At the start of the seventh, though, Snitker pulled him for Luke Jackson, and that didn’t go well. Chris Taylor hit a leadoff double off Jackson, then Cody Bellinger walked, and then A.J. Pollock doubled down the line to left, scoring Taylor and getting the Dodgers within two with none out and runners on second and third. That led to Snitker summoning Matzek, and Matzek promptly struck out Albert Pujols, Steven Souza, and Mookie Betts to end the inning. Here are those strikeout pitches:

Matzek has been amazing with runners already on this postseason:

Tyler Matzek has 11 strikeouts with RISP this postseason.

That is tied for the most by a reliever in a single postseason (John Rocker, 1999). pic.twitter.com/Ct1fXrN2iY

And he made some history for late-game strikeouts here:

IMPORTANT CLARIFICATION: This should mention 7th inning or later. It *has* been done earlier in the game. @jaysonst @ericstephen

Matzek also worked a one-two-three eighth, striking out Corey Seager and getting Trea Turner and Will Smith to ground out. Snitker then subbed in pinch hitter Jorge Soler for him in the bottom of the eighth, and Soler doubled (but didn’t score). That led to the Braves bringing in their own Will Smith to pitch the ninth, and he struck out Taylor and Bellinger, then got Pollock to ground out, sending Atlanta to the World Series.

And the crowd went nuts:

Truist Park erupts after AJ Minter punches out Will Smith to end the top of the sixth. Minter has retired all six batters faced over two scoreless with four strikeouts. #Braves pic.twitter.com/COpvdUM8Fy

The Braves will now face the Houston Astros in the World Series. Game 1 will be Tuesday night in Houston, beginning at 8 p.m. ET on Fox.