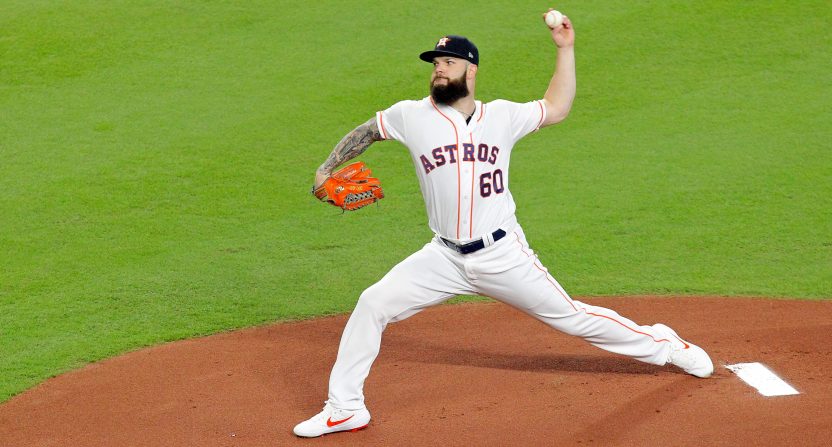 The Atlanta Braves reached an agreement with free-agent starting pitcher Dallas Keuchel on Thursday night, according to David O’Brien of The Athletic.

#Braves have agreed to terms with left-hander Dallas Keuchel, sources tell The Athletic.
Likely a one-year deal, but working to confirm that.

Tim Brown of Yahoo! Sports reports that it’s a one-year deal for $13 million, and Keuchel will pitch in Triple-A on Saturday.

Keuchel deal is for one year, $13 million. Physical is Friday in Atlanta. First start is scheduled for Saturday in Gwinnett.

Since the move comes after the draft, the Braves won’t have to surrender a draft pick for the signing. It’s why reliever Craig Kimbrel was also unsigned until he agreed to a deal with the Chicago Cubs on Wednesday.

Additionally, Keuchel may be a better starting pitcher than anyone on the trade market, and the Braves don’t have to give up top prospects. They will have to give up money, of course, but any front office would rather pay in dollars than prospects if the ownership allows for it. And if the Braves want to address other needs — likely their bullpen — before July 31, the prospects they didn’t have to use to acquire a starting pitcher could be used to acquire something else. It gives the front office much more flexibility.

While 21-year-old Mike Soroka (1.41 ERA in 57 1/3 innings) has been sensational, and 25-year-old left-hander Max Fried has been very good as well (3.68 ERA in 66 innings), the Braves really needed to add a reliable presence in their rotation (especially with Mike Foltynewicz having a 5.89 ERA so far in 2019). Keuchel provides that, and also gives them an arm with playoff experience which could be big in October (he won a World Series with the Astros in 2017, and has a 3.31 ERA in 51 2/3 postseason innings).

The Braves (33-29) are currently two games behind the Philadelphia Phillies in the NL East, and have a 0.5-game lead for the second NL Wild Card. Keuchel likely makes them about two games better on paper for the rest of the 2019 season, and — as the standings suggest right now — that could easily be the difference in being a playoff team or not.

The move is also a statement to the clubhouse and fan base that the up-and-coming Braves believe they’re ready to win now, and are going for it.