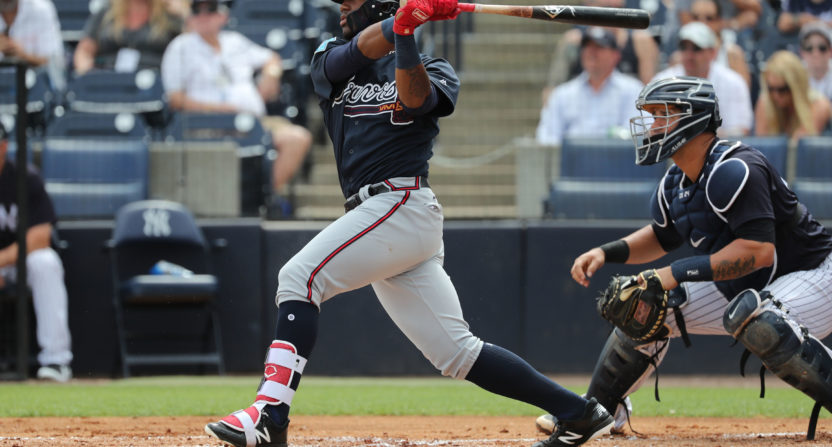 Today, on March 19, 2018, 20-year-old Ronald Acuna is one of the best players in the Atlanta Braves’ organization, major-leaguers very much included. He can run, he can field and he can hit. Last year, he posted an .814 OPS at High-A, an .895 at Double-A, a .940 in Triple-A and a 1.053 in the Arizona Fall League, where he won MVP honors. The only level left for him to dominate is the Majors, and if anyone ever doubted he was up for the challenge, his .432/.519/727 Spring-Training slash line suggests he can handle it.

And yet Acuna, the game’s top prospect, will not begin the season in Atlanta. Instead, he will start at Triple-A, where he will linger until a few weeks into the season, when the Braves know they can call him up without him accruing a full year of service time, as defined by the collective bargaining agreement. The decision to forestall Acuna’s MLB debut will delay the outfielder’s free agency and keep him cheap for longer, which is good for the beancounters in the Braves’ front office. But it will also cost Acuna millions, deprive fans of a great player and hurt the team for a few weeks in April. Put another way: No one wants to see more at-bats from Lane Adams.

Technically, teams are not allowed to demote players for service-time reasons, but you can bet they will continue to do so until the league intercedes or the MLBPA makes a priority of eliminating the practice. Until then, we’ll get weak explanations like this one:

If you believe that, we’ve got a publicly financed stadium deal to sell you.

In a way, Acuna’s demotion is the perfect coda to an offseason that has made baseball fans consider how prudent moves for teams often screw over players. It’s easy to see why teams would rather take their chance on cheap young players instead of sacrificing a draft pick to sign Mike Moustakas, but that hardly seems fair to Moustakas, who waited seven years for his crack at free agency. And it makes some sense that a rebuilding team might rather shuttle relief pitchers up the the minors to pitch every fifth day as opposed to signing a fifth starter, but that’s a damn tough break for free-agent pitchers who can’t find a team as well as the hurlers who wind up overworked from the four-man rotation. In the same way, it’s hard to really blame the Braves for a move that clearly helps their cause long-term, but it’s also hard not to feel that Acuna has a fair grievance over being kept out of the majors even when he has clearly earned a spot.

Before long, Acuna will earn his call-up and most fans will forget the three extra weeks he spent in Triple-A. But years down the road when Acuna finally hits free agency and Atlanta asks for his loyalty, you can bet he and his agent will remember whose interest the team had in mind this spring.