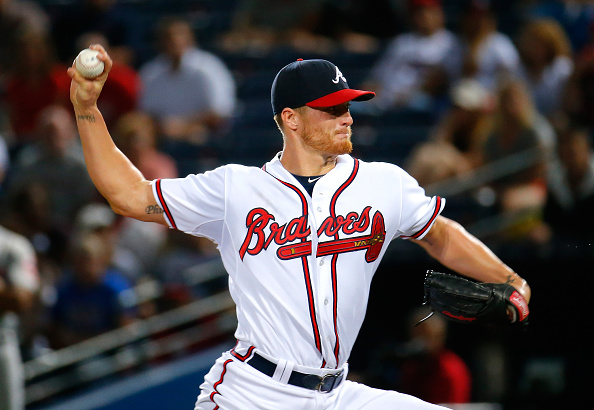 For the third time in two years, the Atlanta Braves have made a trade with the Arizona Diamondbacks that is being widely regarded as a complete and utter robbery. The Braves traded starting pitcher Shelby Miller and reliever Gabe Speier to the Diamondbacks for a package of just three players – outfielder Ender Inciarte, pitcher Aaron Blair, and shortstop Dansby Swanson, the #1 overall pick in this past June’s MLB Draft.

The first robbery came in January of 2013, when the Braves acquired Justin Upton and Chris Johnson from Arizona for Nick Ahmed, Randall Delgado, Brandon Drury, Martin Prado, and Zeke Spruill. Prado and Spruill have already moved on from the Diamondbacks, while Delgado has spent the bulk of the last two years as a reliever for Arizona and Ahmed entrenched himself as a light-hitting shortstop for the club. Drury is the last wild card left in the trade, a 23-year old who made his major league in 2015 coming off a year in which he hit five homers with a .756 over 130 games between AA and AAA.

The second robbery came this past June, when the Braves essentially bought top 100 pitching prospect Touki Touissant from the Diamondbacks. They traded utilityman Phil Gosselin to Arizona in the trade while also taking on the remaining cash on Bronson Arroyo’s contract. Gosselin is what he is – a bench bat, while Touissant is still just 19 and was Arizona’s first round pick (16th overall) in 2014.

And now, there’s this trade – the third robbery. In exchange for three years of Shelby Miller and relief prospect Gabe Speier (himself acquired by the Braves earlier this offseason in the Cameron Maybin trade with the Tigers), Arizona gave up starting left fielder Ender Inciarte, pitching prospect Aaron Blair, and shortstop prospect Dansby Swanson. It’s a hefty package – one major league caliber player, and two top 100 prospects – for a pitcher in Miller, who is a good (but not great) starter.

Miller went just 6-17 in 2015, but had a 3.02 ERA in 205 1/3 innings, striking out 171 and walking 73. The lack of run support given to him by the Braves sabotaged his win/loss record, but the underlying statistics showed how good of a pitcher he really was.

But…Shelby Miller is not Jose Fernandez. He’s not Chris Sale. He’s not even Carlos Carrasco. And the package that the Diamondbacks for him could perhaps best be described as “excessive”. Inciarte is just 25 and hit .303/.338/.408 last season with six homers and 21 steals along with sterling defensive work at all three outfield positions (ten assists, +29 DRS, 14.5 UZR).

Then, there’s the real prize of the deal for the Atlanta Braves – Dansby Swanson. Swanson was the #1 overall pick in June’s MLB Draft just six months ago out of Vanderbilt, and will probably end up being a top 10 or 20 prospect in baseball when the 2016 preseason lists come out. In 22 games with Hillsboro of the Northwest League, Swanson hit .289/.394/.482 with seven doubles, three triples, and one homer. Considering he was drafted out of a four-year college and will be 22 in February, he’ll likely move quickly through Atlanta’s farm system and should be in the majors at some point during the 2016 season. Following their trade of Andrelton Simmons to the Angels earlier this offseason, the Braves were lacking a franchise shortstop…until now, of course.

The cost for Miller was certainly steep for the Diamondbacks, but if they wanted Jose Fernandez, it would have cost them the same three players, plus the aforementioned Drury *and* starter Patrick Corbin.

And when you look at it that way…maybe they overpaid for Miller, but they would have been better off giving up these three players for Miller than giving up these three *plus* a current member of their rotation and another prospect. Now, behind Zack Greinke, Miller, and Corbin, there are only two rotation spots to jockey for as opposed to three behind Greinke and Fernandez. Jose Fernandez is awesome, but wouldn’t it be more difficult for the Diamondbacks to fill three rotation spots behind him and Greinke than two behind Greinke, Miller, and Corbin? At the very least, it’s a worthy debate.

But at the end of the day, the Braves got more than fair market value for Miller. Just consider this – a year ago, the Braves acquired Miller (and Tyrell Jenkins) in exchange for one year of Jason Heyward and two years of reliever Jordan Walden. Heyward’s now a free agent, while Walden threw just 10 1/3 innings last season. Meanwhile, Atlanta got one year worth of Miller’s services, Jenkins, Blair, Swanson, and five years of control of Inciarte (who isn’t even arbitration eligible as a Super Two until next offseason).

Calling this trade a robbery might be underselling it. “Heist” is more like it. Arizona paid a premium to get their guy, and while they kept AJ Pollock (the player Atlanta initially insisted on in any Miller trade), they still gave up a current contributor, and two players that could contribute as soon as next season – including one that was considered a future franchise cornerstone. The Greinke signing was about contending and winning a World Series during the first half of his deal, and with Miller now in the fold for the next three years, winning is now of the utmost importance between 2016 and 2018.

If the Diamondbacks fail to bring a second World Championship to the desert by the end of the 2018 season, we could end up looking back on the Shelby Miller trade as one of the biggest trade blunders in sports history. But hey, if they end up winning a title – flags fly forever.