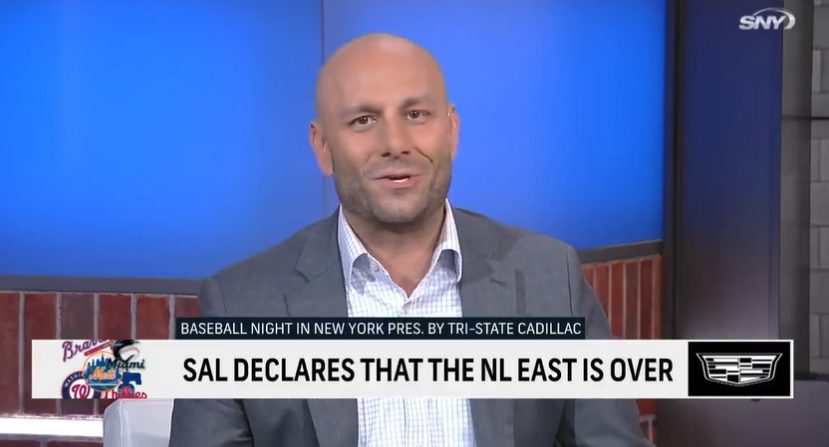 The Atlanta Braves completed a three-game sweep of the New York Mets on Sunday and while it didn’t clinch the division, it did everything but. Atlanta is on the doorstep of its fifth straight National League East title. And in the aftermath of that sweep, some receipts are being cashed in.

On May 31, the Mets hammered the Washington Nationals on May 31, defeating them 10-0. When play completed on that day, New York held a 10.5-game lead in the NL East. Sal Licata, host of SNY’s Baseball Night in New York, felt good about the Mets’ outlook on that day.

“You don’t need me to tell you this but I’m gonna tell you anyway — the NL East is over. That’s right. It’s a wrap. No one is touching the Mets. Tweet me the hate all you want about the jinx. Nonsense. The Mets will be National League Eastern Division champs and I don’t even think the Braves are gonna challenge them.”

Licata detoured from the Braves momentarily before finishing with, “And even if the Braves do turn it around, it will be too late. The NL East is over.”

"THE NL EAST IS OVER" – @sal_licata on Baseball Night in New York pic.twitter.com/caPEQM4w6w

New York’s lead in the National League East was 10.5 games after June 1, as well but from there, the division lead began to steadily shrink. By the end of both June and July, it was only three games. And while the Mets got the lead up to seven games on August 10, the lead shrunk through the rest of the month and again, sat at three games entering September.

Now, the Mets and Braves both have three games remaining. And unless we get a 3-0 finish from New York coupled with an 0-3 finish from Atlanta, the Braves will win the National League East.

So, four months after Licata declared that “the NL East is over,” his take has a “Dewey Defeats Truman” quality to it.

Naturally, baseball fans had a lot of fun with this speech on Sunday night.

Braves sweep the Mets and own the NL East tiebreaker AND have a 2 game lead with 3 to play AND have likely sent the Mets to a 3 game wild card series vs a great Padres staff. If they win that (lol) a division series vs the Dodgers with deGrom and Scherzer going just once. WOOOOOF https://t.co/dFAl1kOmRm

I know this is piling on at this point…but what the heck…Go @Braves! https://t.co/mppy7zhiJy

It was not too late. The Mets did not get better as the year went on. https://t.co/US5btElUKb

Imagine being this guy rn https://t.co/0ff8W7mlPX

And while Licata didn’t directly address his cold take in the immediate aftermath of Sunday’s game, he was highly critical of the team he gave the division to after only two months of the season.

The Mets- the only team that can have one of the best seasons in their franchise’s history and still make fans absolutely sick to their stomachs. Disgusting and embarrassing. Try and sugarcoat it- you can not. Don’t care how many win. Total embarrassment.

What’s interesting is that it’s not as though the Mets have had a prolonged skid since the end of May. After play on May 31, New York sat at 34-17. Since then, the Mets have gone 64-44. That’s a .593 winning percentage and while that’s not as good as the .667 clip that New York was playing at through the end of May, a .593 win percentage translates to 96 wins over a full season.

The Braves, meanwhile, were 23-27 on May 31. Since then, Atlanta has gone 77-32. That’s a .706 winning percentage which throughout a full season, translates to 114 wins. So, Licata really was wrong on May 31. Not only was the National League East not over on that day but Atlanta had plenty of time to chase New York down. That’s exactly what happened.

The Mets have had some rough spells but by and large, they haven’t choked the division away over the season’s final four months. The Braves have simply taken it from them.