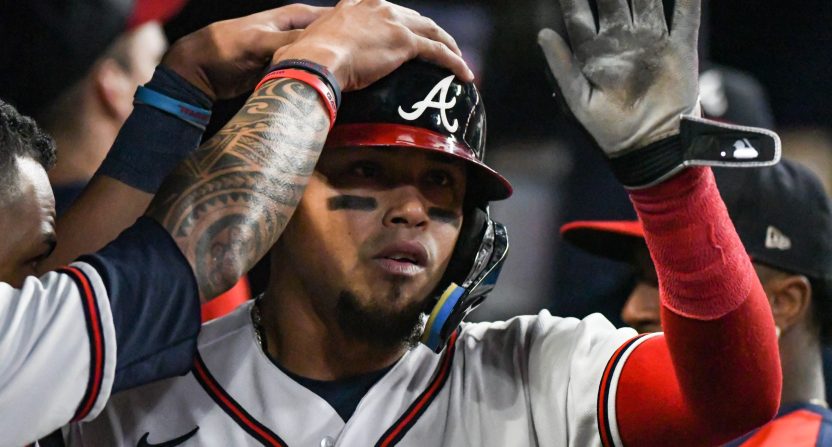 Atlanta won the first two games of the series but still really needed a win on Sunday. A New York win would have tied the division with three games to play and given the Mets the tiebreaker. The Braves got the sweep they needed, defeating the Mets 5-3 on Sunday night.

What does that mean? The Braves are now two full games ahead of the Mets in the standings with three to play. And as the season series was tied 9-9 heading into Sunday, Atlanta has the tiebreaker over New York. So, while the Braves officially have a two-game lead with three to play, it’s effectively a two-and-a-half game lead.

The MLB world had a lot of reactions to this one.

There’s no better preparation for life than being a Mets fan.

This Braves team is so much better than last year's Braves team. And that team, uh, won the World Series.

THE NEW YORK METS COME INTO TRUIST PARK AND LOSE NOT ONE, NOT TWO, BUT ALL THREE GAMES TO THE ATLANTA BRAVES TO FALL TWO GAMES BACK WITH THREE TO PLAY. THEY WERE UP 10.5 GAMES ON JUNE 1.

The Braves and Mets will finish the season against the two worst teams in the National League East. Atlanta will go on the road to take on the fourth-place Miami Marlins while New York will return home to host the Washington Nationals. While the Mets sweeping the Nationals is a distinct possibility, the Braves getting swept by the Marlins is highly unlikely. Given that Atlanta’s magic number is one, the National League East title is not especially realistic for the Mets.

That said, all hope is not lost. New York clinched a playoff spot long ago. And as the Mets will be no worse than the top Wild Card team, they will host all three games of the Wild Card series. From there, though, things will get tough, as a win in the Wild Card round would put New York in line to face the Los Angeles Dodgers in the division series.

The Braves sweep the Mets, own the NL East tiebreaker, have a two-game lead with three to play and have likely sent the Mets to a three-game wild card series vs. a great Padres staff and, if they win that, a DS vs. the 110+ win Dodgers with deGrom and Scherzer going just once.

So, while we can’t say that all hope is lost for the Mets, Sunday was a tough day, especially considering that they’ve held the National League East lead for nearly the entire season. And for the Atlanta Braves, their postseason prospects look a lot better. MLB hasn’t had a repeat champion since the New York Yankees three-peated from 1998-2000. Winning the division won’t guarantee a repeat for the Braves by any means but it makes the possibility a lot more likely.