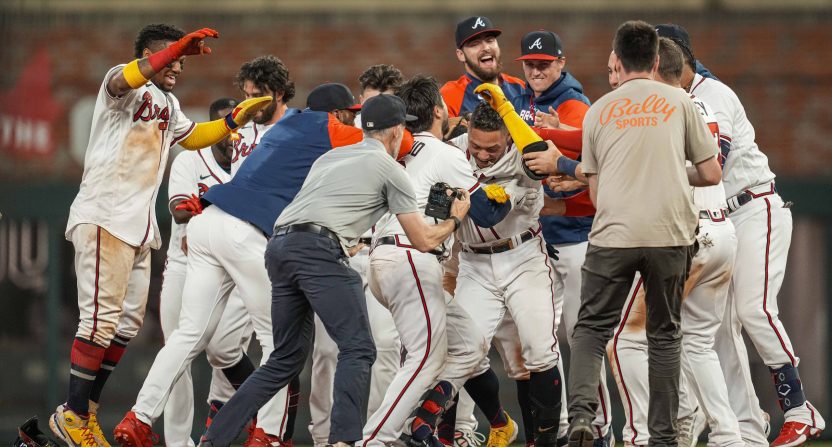 For eight innings, Tuesday’s game between the Philadelphia Phillies and Atlanta Braves seemed normal. Then, the ninth inning happened.

The Braves led 4-3 going into the final inning. Rhys Hoskins led off the inning for Philadelphia with a foul out to the catcher. After that, though, Alec Bohm walked, bringing Bryce Harper up as the go-ahead run. Harper did not disappoint.

BRYCE HARPER IS THAT DUDE. PHILLIES TAKE THE LEAD!!! pic.twitter.com/XpQsyFB85v

The Braves did retire the next two hitters. But now, instead of likely not having to deal with a bottom of the ninth inning at all, Atlanta was now trailing by a run going into it.

That did not last long.

Dansby Swanson led the inning off with a double, then advanced to third on a wild pitch. Then, Philadelphia’s defense showed why it was a known question mark going into the season.

Ronald Acuña Jr. tied the game with a sacrifice fly. Only, Philadelphia experienced none of the benefits of the sacrifice fly. Centerfielder Roman Quinn misplayed the ball. Swanson scored and Acuña ended up on second base with nobody out.

YOU HAVE TO BE KIDDING!!!! pic.twitter.com/YM3KffuZkU

William Contreras delivered a line drive to center field, which landed in front of Quinn. Acuña sprinted home from second as the winning run.

Perhaps none of the many famed expressions uttered by the late, great Yogi Berra resonates more than, “it ain’t over till it’s over.” Those words have never had more truth than in Tuesday’s game.

Absolute all timer of a win probability chart pic.twitter.com/ydPhVKdJEo

Another famous phrase in sports came to us from Jim McKay, who spoke of, “The Thrill of victory and the agony of defeat” during Wide World of Sports.

The reactions following that wild ninth inning summed that phrase up perfectly.

Just give Bryce away. He doesn’t deserve this. https://t.co/5nkusmT2l2

We don't get nice things in this city. https://t.co/sz8OBHf78v

What is a bullpen and defense???? https://t.co/tKtM33jcbY

There aren’t much more sweeter feelings in the game of baseball than walking off on the Phillies!!

I’ve said it before and I’ll say it again, I hope this win helps spark some momentum to get a win streak going.

Love to see it https://t.co/6qYiROc5zr

I love these boys. https://t.co/yrY9EORHG8

The Phillies have been down this road before this year. They snatched defeat from the jaws of victory, blowing a six-run ninth-inning lead. Philadelphia has also snatched victory from the jaws of defeat with another team’s defensive gaffe.

Tuesday’s loss moved the Phillies to 20-23, so we can’t say they’re a good team. We can say that they’re not boring.