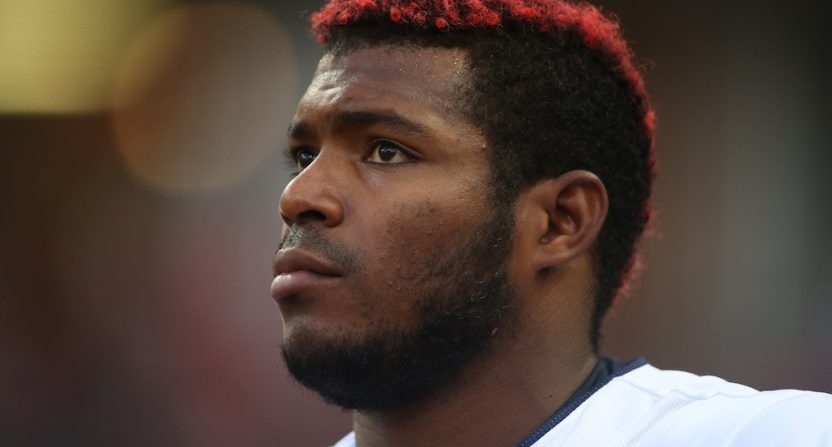 With just over a week before the shortened 2020 MLB season begins, Yasiel Puig has finally joined a team.

The outfielder, 29, signed with the Atlanta Braves on Tuesday. Terms of the deal haven’t been revealed as the Braves haven’t officially announced the signing, which is pending a physical and COVID-19 test. The guess is that Puig agreed to a one-year contract so close to the regular season.

Not to alarm anyone but I’m 99% positive Yasiel Puig walked out the Omni hotel in the battery, walked past me, and got in the back of an Uber. Big muscular man, same hair. Same face… Don’t wanna be that guy that breaks something wrong but… Puig to the #Braves?

Chandler added that Puig wasn’t carrying any luggage, so didn’t appear to be leaving the Omni. Sure, he could’ve been visiting Atlanta. But what were the chances of that in mid-July with the MLB season about to start?

Putting aside that baseball media may have a new insider (much like the Kansas City liquor store manager who scooped Adam Schefter on the Patrick Mahomes contract), the Braves add to an already strong outfield during an uncertain season when depth could be extremely important.

So where exactly does Puig fit in the Atlanta lineup? Markakis opted out of playing the 2020 season, so that opened a spot on the roster. But the Braves signed Marcell Ozuna (also to a one-year deal) this offseason and he’ll likely play left field. Ozuna hit .247 with an .800 OPS, 29 home runs, 23 doubles, 89 RBI, and 12 stolen bases.

That question is more easily answered with National League teams having a designated hitter for the 2020 season. Puig could DH, perhaps alternating with Ozuna and Austin Riley.

Atlanta will likely also begin the season without first baseman Freddie Freeman, who contracted COVID-19. The Athletic’s David O’Brien reported that Freeman is apparently “feeling better,” but it’s still not known when he could be available to play.

So the Braves could begin the season with Riley at first base (where he’d been working out going back to Spring Training in March) and Puig at DH. Ozuna playing left field, Ronald Acuna Jr. in right, and Ender Inciarte in center would be Atlanta’s best defensive outfield. But we’ll likely see Puig getting time in right while Acuna plays center, especially against left-handed pitching.

However, the left-handed Inciarte actually hits well against lefty pitching, compiling a .273 average and .701 OPS, albeit in only 50 plate appearances last season. Puig batted .279 with a .791 OPS facing lefties last season, though he’s hit righties better (.285 average, .845 OPS) over his career.

Atlanta manager Brian Snitker could have worse problems than trying to figure out where to fit these bats in his lineup. What matters is the Braves are a better team than they were 24 hours earlier, getting the best hitter remaining on the open market shortly before a shortened season in which such a move could make a significant impact.

UPDATE: Just three days after reportedly agreeing to a deal with the Braves, Puig announced on social media that he’s tested positive for COVID-19. The outfielder says he’s asymptomatic and feels “absolutely fine.”

However, Ken Rosenthal of The Athletic reports that Puig won’t be signing with the Braves and remains a free agent. According to Rosenthal, “The Braves never reached a formal agreement with Puig, but were in serious conversations with him they intended to advance if he tested negative for the virus.”

He will not be signing with the Braves, according to major-league sources.

The Braves never reached a formal agreement with Puig, but were in serious conversations with him they intended to advance if he tested negative for the virus, sources said.

Thus, Puig will remain a free agent, and the Braves will continue to look for additional offense, preferably a left-handed hitter off the bench.