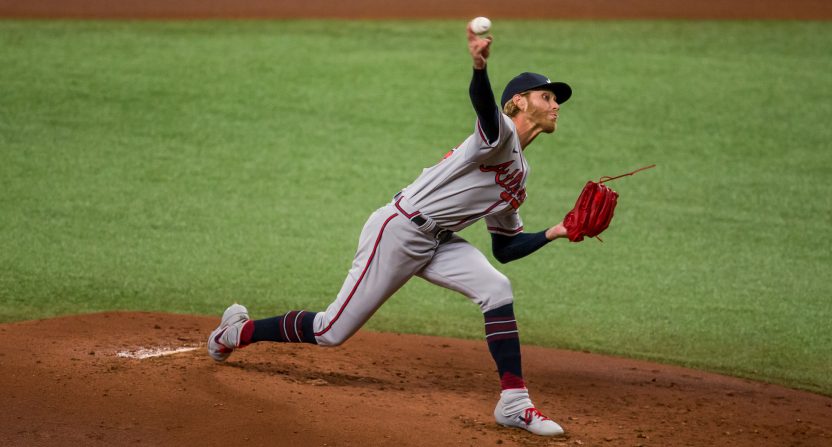 Shortly after a rough outing against the Tampa Bay Rays on Monday night, starting pitcher Mike Foltynewicz was designated for assignment by the Atlanta Braves.

Snitker announced Folty will be designated for assignment. Chad Sobotka will join the team tomorrow.

#Braves' Foltynewicz was designated for assignment, will either be traded or outrighted to Gwinnett to the satellite camp with others not on the 30-man roster.

Foltynewicz gave up six earned runs in 3 1/3 innings, with three home runs and four walks playing a huge part in that.

He knew it was gone as the @RaysBaseball take the lead in the 4th!

Atlanta manager Brian Snitker explained that the organization hasn’t seen “enough increase in the velocity” and “the stuff hasn’t been there” for Foltynewicz. Snitker added that he’s not sure if the velocity drop is health related.

Snitker on Folty: "After the last couple outings in (Summer Camp), we wanted to give it a go here and it was the same. We didn’t see enough increase in the velocity. That’s who he’s been. He’s been a stuff guy for the entire time we’ve had him. The stuff hasn’t been there."

Snitker on the drop in velo for Folty: "I really don't know. Especially if it isn't health. I really have no good answer." #Braves

But it’s still surprising to see the Braves give up on Foltynewicz so quickly.

As the data above shows, Foltynewicz had excellent velocity for a starting pitcher not long ago. He was selected to the All-Star Game in 2018, a season in which he had a 2.85 ERA, 3.37 FIP, and was worth 4.0 WAR (according to Baseball Reference) in 183 innings pitched.

There are surely many teams that would be glad to take a chance on Foltynewicz, bring him into their program, and see if they can get unlock his previous stuff. It will be interesting to see where he lands.

It’s a bit surprising that no team wanted to claim Foltynewicz, who was owed roughly $2.3 million in prorated salary for the rest of the 2020 season. But, it says a lot about how concerned teams must be about his velocity.

It probably does not bode well for Foltynewicz that nobody wanted to even risk the $2 million or so he's owed this season to see if he's fixable.