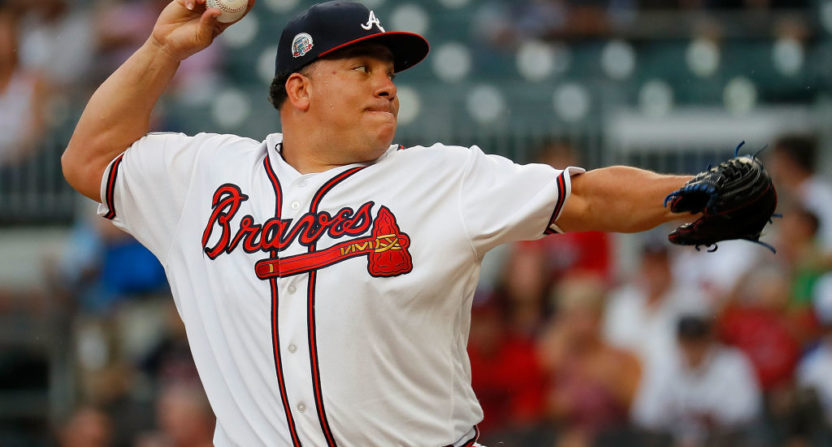 When the Atlanta Braves acquired a trio of veteran pitchers this offseason, their goal was simple – let those veterans eat innings to lessen the pressure on the bullpen. In 2016, Braves starters threw just 880 1/3 innings, ranking 23rd in all of baseball (albeit in one fewer game than 26 teams). Their relievers threw 567 1/3 innings, the fifth-most in baseball. This led to the bullpen getting worn down, and mediocre pitchers getting extended tours in the bullpen.

But through June 6th, Garcia has ironically been the best and most reliable of Atlanta’s veteran starters. Through 10 outings, he’s pitched to a 3.18 ERA over 62 1/3 innings, striking out 40 and walking 27. He’s third on the team in innings pitched despite just those ten starts, he has the best ERA in the rotation, and his 0.5 fWAR is tied for the best among starters with young gun Mike Foltynewicz.

Colon and Dickey, on the other hand, have been disastrous. After getting shellacked by the Phillies on Monday night, Colon’s ERA is an unsightly 7.78. He’s thrown just 59 innings over his 12 starts, and hasn’t finished the sixth inning since April 21st, his fourth start of the season. There are now rumblings that he’ll lose his spot in the rotation sooner rather than later, with his overall poor performance beginning to overshadow his $12.5 million salary this season.

Dickey’s been merely “bad,” but at least he’s thrown more innings than Colon – 65 1/3 through 11 starts. His 5.10 ERA is more than two and a half runs better than Colon’s, but he’s walked more hitters than he’s struck out on the season, and he’s given up at least one homer in nine of his 11 outings on the year.

Overall this season, Braves starters have thrown 309 innings (although, the team has played 55 games, in the bottom third of the league), good for 22nd in baseball. Dickey is the only Brave to crack the top 60 in the league in innings pitched. The performance also hasn’t been there (some of that has to be pinned on Julio Teheran, who deserves his own article one of these days), as the rotation’s 5.04 ERA is better than only the Phillies and Reds.

If there’s a bright side for the Braves pitching staff, it’s this – the unit has remained healthy. Atlanta has used only 16 pitchers this year after breaking out 35 last year. Sure, eight of those 16 pitchers have ERAs over 5.00 for the season, but it could be a lot worse – just look at the 2016 Reds pitching staff, which was a clown car of guys who shouldn’t have been pitching in the majors.

What’s next for the Braves? Colon and Dickey appear to be on borrowed time. Dickey is scheduled to start on Thursday against the Phillies, while Colon is penciled in for Saturday against the Mets. I don’t know how much longer the Braves can continue rolling out either player, but they do have options in the upper minors. Aaron Blair and Matt Wisler will be talked about as options for the major league roster as long as they’re in the organization, though neither has impressed during major league stints. Former first league pick Lucas Sims has taken a massive step forward in 2017 with AAA Gwinnett, pitching to a 4.13 ERA with 62 strikeouts an just 19 walks over 61 innings, but gave up six runs in his last start on Monday night.

Sean Newcomb, the last remaining prize from the Andrelton Simmons trade two winters ago, is also impressing in AAA. He’s struck out 74 over 57 2/3 innings to go along with a 2.97 ERA, but walks remain a concern – he’s given up 33 free passes this year.

What will likely end up happening is this – the Braves keep rolling Colon and Dickey out there until the need for a phantom injury and DL stint is required. Then, either Blair or Wisler will provide a spot start or two heading into the All-Star Break, and the Braves will head into the second half of the year with a new-look rotation.

But hey, maybe things will turn around after Colon’s bobblehead giveaway on Friday. Stranger things have happened, right?