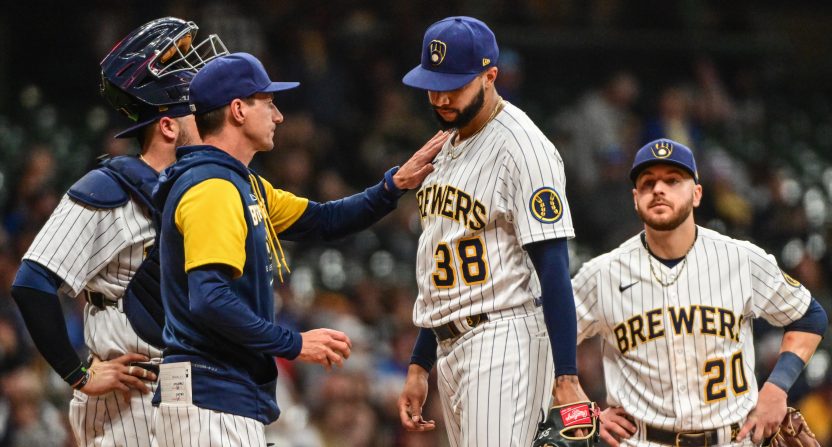 All that the Milwaukee Brewers needed to do on Saturday night to tie the race for the last National League Wild Card spot was to hold a 3-2 lead against the Miami Marlins in the ninth inning. It didn’t happen. And as a result, Milwaukee’s quest to catch and pass the Philadelphia Phillies now looks daunting, to say the least.

Things went awry early for Brewers’ closer Devin Williams, who walked Jon Berti to start the inning. He seemed to right whatever was going wrong, striking out pinch hitter Joey Wendle on three pitches. But Anderson’s control issues reappeared and he walked Brian Anderson. Things only got worse from there.

A wild pitch from Williams moved the runners to second and third. Miami’s Bryan De La Cruz then rapped a single to left field, scoring both runners. He got to second on an error from Christian Yelich.

Williams was then pulled for Peter Strzelecki, who did retire Nick Fortes and Miguel Rojas to end the inning. But by that point, the damage was done. The Brewers were put down in order in the bottom of the ninth inning and lost 4-3.

Brewers broadcast calls the final out of another loss to the Marlins with their season on the line pic.twitter.com/JYj7ynkKvV

The Phillies were, of course, delighted with the result.

Shouts from all corners of the Phillies clubhouse when Bryan De La Cruz put the Marlins ahead in the ninth inning. Cool moment. Brewers lose. The Phillies' magic number to clinch their first postseason berth since 2011 is 3.

Others in the MLB world reacted to it, as well.

Three groundouts for the Brewers against Richard Bleier in the ninth, and that 4-3 loss to the Marlins is as costly as it gets.

That is a disastrous blow to the Brewers, and a huge boost for the Phillies. Wow.

#phillies have not had much to smile about this month. But they have to be loving this #brewers ninth-inning self-detonation by Devin Williams (with a Christian Yelich assist).

You could fill an entire art gallery with these for the #Brewers this year. https://t.co/6rj4QFhvY4

It’s impossible to oversell how crushing this loss was for the Brewers.

With a win, Milwaukee would have tied Philadelphia at 85-73 with four games left to play. The final three games also favor the Brewers, who will play at home against the out-of-contention Arizona Diamondbacks. The Phillies, meanwhile, will play their last three games on the road against the Houston Astros. And while the Astros aren’t playing for much, they are showing no signs of taking the gas off against Philadelphia.

The #Phillies were hoping the #Astros might take it easy in their final 3-game series since they already have sewn up home-field advantage.
Instead, look at who Dusty Baker has lined up to pitch:
Monday: Lance McCullers Jr.
Tuesday: Justin Verlander
Wednesday: Framer Valdez.

In past years, this loss wouldn’t have felt like such a big deal. Being one down with four to play is, of course, significant. But given the favorable schedule, the odds that the Brewers can make up one game on the Phillies in the final four are not terrible. That would have gotten them into a one-game playoff. But this year, that’s not the case.

Game 163 is a thing of the past. Now, tiebreakers go to the team that won the season series. In this case, that’s Philadelphia. So, while the Brewers technically trail the Phillies by one game, they really need to make up two.

Given that only four games are remaining, that’s a massive difference.