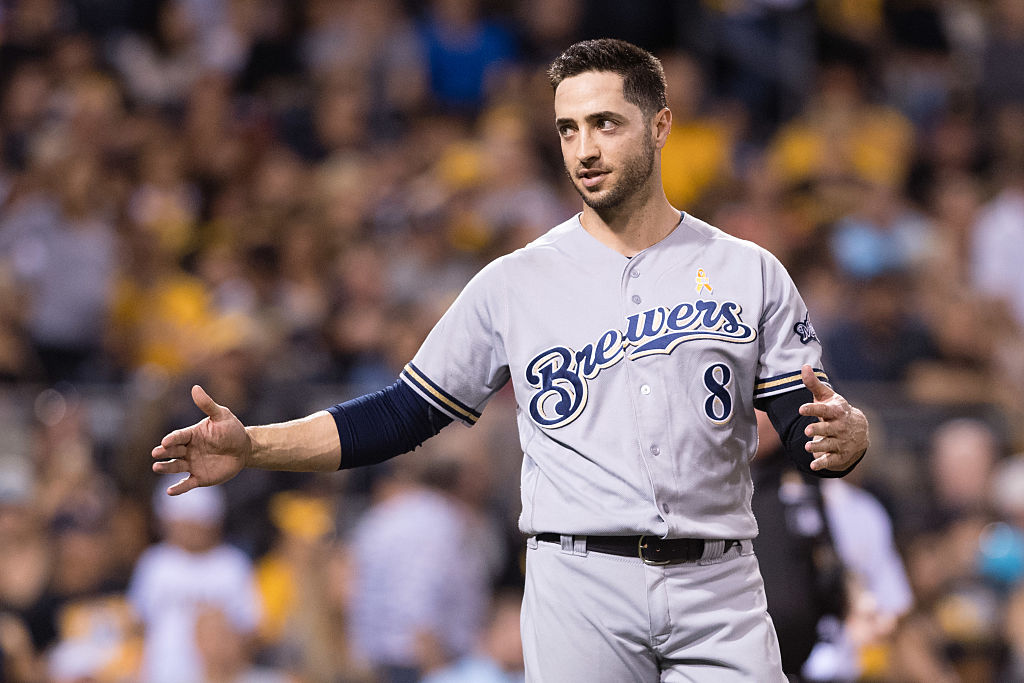 With their flurry of activity last week (for which the entire baseball industry is grateful), the Milwaukee Brewers have created a nice problem for themselves. The Brew Crew definitely improved themselves by trading for Christian Yelich and signing free agent Lorenzo Cain. But the roster now has an outfield glut.

To break up that logjam, many MLB observers figure that the Brewers will explore dealing Domingo Santana, 25, and Keon Broxton, 27. Broxton had a rough season, batting .220 with a .719 OPS, while playing below-average defense in center field. But he still hit 20 home runs and stole 21 bases. Santana looks more like a player Milwaukee would want to keep, coming off a 30-homer season with a .278 average and .875 OPS. Yet with those numbers and his age, he’s likely to fetch much more in a potential trade.

Maybe Ryan Braun could even be trade bait, if Milwaukee could find a team willing to take on the $61 million remaining on his contract through 2020 (providing his $15 million option for 2021 isn’t picked up). The former NL MVP and Rookie of the Year didn’t put up great numbers, due in part to a nagging calf injury, batting .268 with an .823 OPS, 17 homers, 28 doubles and 12 steals. He’s only one season removed from cranking 30 home runs and driving in 91 runs. Yet at 34, a decline seems inevitable during those final three years on his contract.

So if Milwaukee is stuck with Braun, does that mean they have to play him in the outfield? Designated hitter obviously isn’t an option since the Brewers play in the National League. But there are other possibilities on the field, which Braun addressed during the Brewers On Deck winter fan fest on Sunday.

Eric Thames was an early-season sensation at first base for Milwaukee, hitting 11 home runs during the first month of last season. He had 23 at the All-Star break. But his revival in his first season back from Japan hit the skids in the second half, hitting just eight homers with a .246 average and .794 OPS. Signed for just $12 million through 2019, the Brewers are probably inclined to keep him around.

However, the left-handed hitting Thames was awful against left-handed pitching last season, batting. 182 with a .664 OPS. Braun could definitely help at first base as the right-handed platoon. Versus lefty pitching, he batted .264 with an .872 OPS. That’s a vast improvement. And if Braun hits closer to his career norms against lefties, the Brewers would have a force at first base. For his career, Braun hits .331 versus lefties with a 1.017 OPS.

Second base might be a more intriguing possibility, however. Brewers second baseman hit a combined .248 with a .701 OPS last season. Only the Arizona Diamondbacks were worse at the position in 2017. That led to Milwaukee acquiring Neil Walker from the Mets in September, but the team let him go to free agency after the season. The Brewers re-signed Eric Sogard for 2018 and Jonathan Villar has two more seasons of arbitration eligibility. Milwaukee could even bring back Walker, who’s still on the market and likely won’t fetch a high price.

Even though Ryan Braun mentioned he was open to playing some 2B as well if #Brewers needed it, I wouldn't look for that to happen. If he looks OK at 1B, that could happen some as a RH alternative to Thames. That would leave them to figure out what to do with Aguilar.

Braun’s bat would be an upgrade at second. But the question of whether or not he could handle the position probably makes that move a non-starter. He’s never played second base in the major or minor leagues (though he did play shortstop in college), and moving back to the infield would surely revive memories of his disastrous turn at third base during his rookie season.

Yes, Braun won Rookie of the Year in 2007, but it wasn’t because of his defense. He cost the Brewers -32 Defensive Runs Saved that season. His Ultimate Zone Rating was -28.5, which means he allowed nearly 30 more runs than an average third baseman. Braun was moved to left field the next season, where he’s been one of the best hitters in the National League. (However, he did test positive for PEDs after the 2011 season and later admitted to using them that season.)

For now, Braun certainly sounds like a good team player with a willingness to change positions. At the very least, the Brewers could let Braun give it a try at second base during spring training and see how it works out (and hope he doesn’t somehow get injured doing so). If Milwaukee was able to pencil in an outfield of Yelich, Cain and Santana, that would be a formidable threesome. And maybe manager Craig Counsell could find enough at-bats for Braun by shuffling him among the outfield, first base and even some second base — while probably playing designated hitter during interleague play in American League ballparks.

1 thought on “With Brewers’ outfield logjam, Ryan Braun offers to play first or second base”