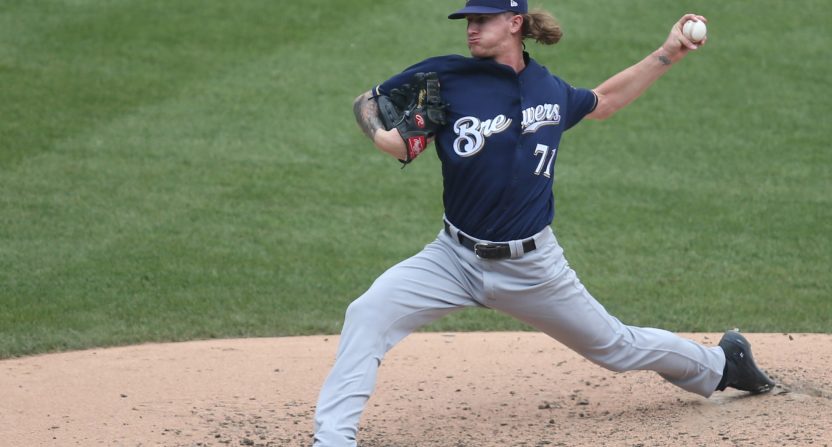 Milwaukee Brewers’ relief pitcher Josh Hader was rocked for four hits, including a three-run homer by the Seattle Mariners’ Jean Segura in 1/3 of an inning during Tuesday night’s MLB All-Star Game.

But what Hader did in an exhibition baseball game was the least of his problems on Tuesday night.

Many offensive tweets that included racist and homophobic thoughts from Hader surfaced during the game. The tweets from the now-24-year-old were from 2011-2012.

Here’s a sampling of the very awful tweets:

Josh Hader not only getting lit up in the ASG…. pic.twitter.com/7V3Bikcwps

Before the game even ended, Hader made his tweets protected.

And Hader’s family members in attendance took off their jerseys with “Hader” on the back during the game.

Some members of Josh Hader’s family, wearing his All-Star replica jersey, have taken them off and been given generic jerseys without his name on the back.

Hader was asked about the tweets after the game, and said he was “young, immature, and stupid.”

Brewers reliever Josh Hader said his racist and homophobic tweets were a sign of immaturity when he was 17 and plans to apologize to his teammates, saying they don’t reflect on him as a person now. ‘No excuses. I was dumb and stupid.

Josh Hader: “I was young, immature and stupid.”

And this explanation especially wasn’t a good one: “When you’re a kid, you tweet what’s on your mind.”

Josh Hader apologized and said his awful tweets do not reflect his current views. “When you’re a kid, you tweet what’s on your mind,” he said.

Posting on social media about being wasted or smoking weed is one thing when you’re 17 years old. But there’s no defending straight-up racist, homophobic tweets.

So, I just became aware of the Josh Hader tweets, and I hope no one is using his age as an excuse, because it's not. It's not a good one, anyway.

We read Huck Finn in English class in middle school, which meant talking about the N-word’s use past and present. Spare me “too young to know better” because Josh Hader was 17 or whatever when he tweeted it repeatedly — and never deleted those tweets as an adult public figure.

MLB reportedly is considering a statement regarding Hader’s tweets on Wednesday.

It will certainly be interesting to hear MLB’s response, and hopefully it’s not just that Hader was a dumb 17-year-old.

Update: Lorenzo Cain — also an All-Star and Hader’s Milwaukee teammate — was asked about Hader’s comments after the game.

Lorenzo Cain, who said he spoke briefly to Josh Hader before talking with the media. pic.twitter.com/UJKi1QBII7

Lorenzo Cain: “At the end of the day, you have to give people a second chance. For me, I’m moving on from it. I didn’t ask for an apology. We’ll talk more on the plane (Wednesday).”