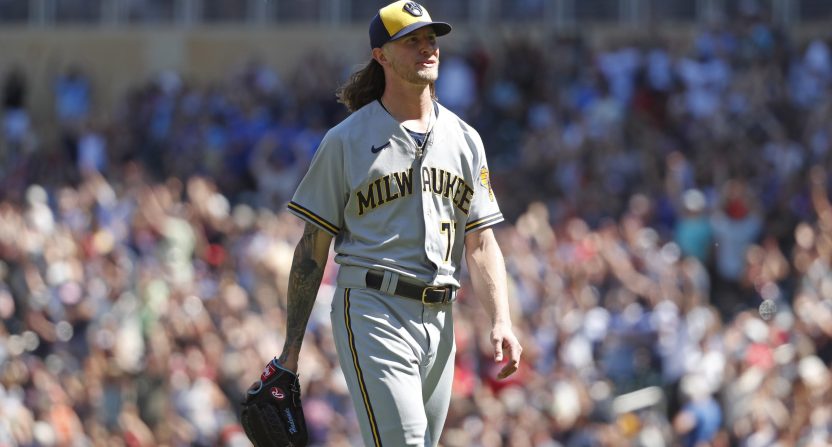 The San Diego Padres have been one of the teams rumored to make a trade for Washington Nationals star outfielder Juan Soto. To this point, they have not made the plunge on Soto just yet, but they made a huge move for another All-Star caliber player on Monday.

The Padres and Milwaukee Brewers have agreed to a trade that will see star closer Josh Hader (seen above during a July 13 game) heading to San Diego. In return, the Brewers will get closer Taylor Rogers, pitcher Dinelson Lamet, outfielder Esteury Ruiz, and pitching prospect Robert Gassar.

Hader has been undoubtedly one of the best closers in all of baseball the past few seasons. But he has not quite been his dominant self this season, currently holding a 4.24 ERA in 37 appearances for the Brewers this season.

Regardless, it is rather shocking to see the Brewers trading one of the top relievers in baseball while they are leading the NL Central and have a clear chance at the playoffs this season. That drew a ton of criticism from many around the MLB world.

wait. the Brewers are in first place and just traded their closer? https://t.co/SDO9yPEucB

Why would the Brewers do this in a year where they're a contender? https://t.co/L2TfOexIoO

While this move seems shocking for a contending team like the Brewers, they do look to have a closer in waiting if they so choose on the roster in 27-year-old relief pitcher Devin Williams.

Williams has been the setup man thus far this season for Milwaukee but has arguably been better than Hader, currently holding a 1.59 ERA in 43 appearances this season.

That was good enough to send him to his first All-Star game recently and may be good enough to take the closer role, even with Padres’ closer Rogers coming to Milwaukee in this deal.

For the Padres, they will get a closer with a proven track record of excellence, which could become extremely important if they are able to make the playoffs this season.

They currently hold one of the two Wild Card spots available in the National League, but it is far from a secure hold that they have on said spot.

San Diego is making it clear that they see themselves as contenders moving forward, and Hader should make a huge impact with the organization for the rest of the season.