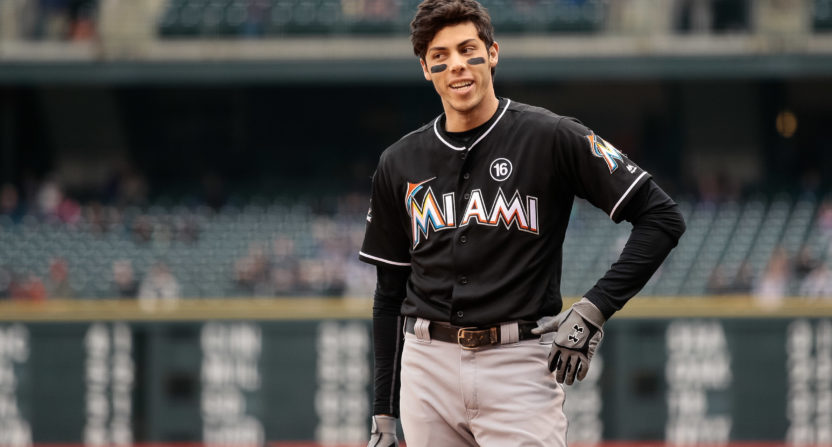 The Milwaukee Brewers have added perhaps the best young player available on the trade market in Marlins outfielder Christian Yelich.

That’s via The Athletic’s Ken Rosenthal:

The team confirmed the deal later, including the return heading back to the Marlins:

The #Brewers have acquired OF Christian Yelich from Miami in exchange for OF Lewis Brinson, OF Monte Harrison, INF Isan Diaz and RHP Jordan Yamamoto. pic.twitter.com/1Cni0JA67B

That’s big for Milwaukee; Brinson and Harrison were both on ESPN prospect guru Keith Law’s top 100 rankings this week, but Milwaukee had four other players on the list they were able to keep, including their top-ranked prospect, Corbin Burnes.

The Brewers had been connected to Yelich for a while now:

Source : Brewers have put together a trade offer & have shown strong interest Marlins OF Christian Yelich. Other teams remain in the mix.

And it makes sense as to why. Yelich is 26, coming off of two straight 4.5 fWAR seasons, and is under very cheap control through 2022. He’s a perfect fit for a team trying to both angle for possible contention now, while also keeping their options open for what could be a wider window of contention in a year or two. We wrote earlier this week that the Brewers could be a surprise buyer, for a few reasons:

In an increasingly bifurcated league, the Brewers are part of a dwindling middle class of teams that could contend for the playoffs if things break right. Given a wide-open wild-card field and an NL Central favorite (the Cubs) with some major holes to fill, Milwaukee wouldn’t have to improve much to sneak into the postseason.

And although the Brewers ran the lowest payroll in baseball last year, owner Mark Anastasio has shown a willingness to spend before. Milwaukee eclipsed $100 million in salary as recently as 2015 and surpassed league-average payroll in 2012. With only $61.5 million currently committed for 2018, the front office has some money to toss around. Yelich’s $7 million and even the $20 million or so Darvish is likely to get would leave the Brewers flexibility to add some more complementary pieces before the season starts.

Now, landing Yu Darvish could still be a longshot; indeed, there’s at least one surprisingly prescient message board poster who predicted the Yelich trade to the Brewers while also saying Darvish was likely to be a Cub:

The Cubs are still likely the frontrunner in the NL Central, but getting Yelich for this price is an absolute steal. As with the other Marlins trades this offseason, you have to wonder whether they were really shopping around their assets to the best of their ability; Yelich, on that contract, is the kind of player that should be bringing back a better return than a package headlined by Lewis Brinson.

Lewis Brinson turns 24 in May and has 55 plate appearances.

The Marlins turned three assets into, essentially, a few decent prospects and a ton of salary relief. How is this good for the game? Just about the only good thing about this deal is the Brewers not being a big-spending team by nature; it also livens up the race in the NL Central, and could perhaps push the Cubs to up a potential offer to a player like Yu Darvish in an effort to more comfortably pad their projected lead in the division.

Most of all, though, given how slowly things have developed this winter, it’s exciting to have an actual baseball thing happen! Grant Brisbee is writing about teasers for Super Bowl commercials, for god’s sake, we needed something to talk about.

UPDATE: This helps a bit, too. They really are going for it!